Go Where It's Scary - Into the Abyss of the Hero's Journey: A Friday the 13th Craft Post by S.P. Sipal

Happy Friday the 13th! But we usually don't think of this date as a happy one, do we? No, we associate Friday the 13th with dark places and scary events. And that darkness and fear is a very necessary part of being human...and telling a story.

Years ago, whenever I was creatively procrastinating upon a tough job at work, or doing my best to avoid a task that involved conflict, a guy in my office would give me some of the best advice I’ve ever gotten in life: Go where it’s scary.

The only way to work through the problem, to get to the other side, is to face it head-on. Whimping out and avoiding it, as I liked to do, truly didn’t do me any good. It just prolonged the pain.

I’ve always remembered my colleague’s advice, and that phrase, “Go where it’s scary,” comes to mind whenever I find myself dragging toward something I dread but know I must do. This is especially true with my writing. Being the polite Southern girl that I am, I often hesitate to inflict conflict upon my characters, or even worse, have them confront and deal with their innermost pains and fears.

As in life, confronting and traveling through our fears is an essential part of being human, it’s even more so with our characters, our heroes. And no part of story construction addresses “go where it’s scary” more directly than the approach to the innermost cave of the Hero’s Journey.

The Hero’s Journey and its Abyss, or Inmost Cave, is a concept described within Joseph Campbell’s groundbreaking The Hero With a Thousand Faces. A comparative mythologist, Campbell studied myths separated by continents, centuries, and cultures and discovered that most shared a basic framework, the hero’s quest, which he broke down into 17 steps. Christopher Vogler, a scriptwriter and film producer, simplified Campbell’s work into 12 steps in The Writer’s Journey, making it more accessible to writers and the film industry. Campbell’s and Vogler’s Journey have been used in storytelling in everything from Star Wars to About a Boy to Harry Potter to insertyourowntitlehere.

At the heart of the Hero’s Journey is the sending forth of the hero from his home clan to begin a series of trials and temptations that lead to his victory over their adversaries, which culminates in his triumphant return with a reward that enriches the clan as a whole. You can see why this basic story structure would have primordial appeal to the human psyche — it is how any human unit, whether that unit be a clan, a family, or a nation — has survived and prospered throughout millennia. 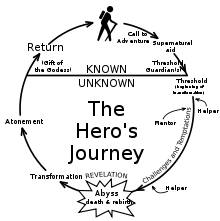 The Abyss is the point in this journey where the heroine approaches her most intense conflict, her Ordeal. It is in the innermost cave that she must face and conquer both her outward foe and her own personal demons. Cave analogy harkens back to our days when the darkest places we had to fear held deadly creatures that often lurked deep in the places we called our homes. The abyss, or underworld, was the place of loss, where all bodies must eventually travel…that final, unknowable journey.

Whether in the underground, snake-filled “Well of Souls” where Indiana Jones recovers the ark but loses it to the Nazis, or the lonely, cave-like home of Will Freeman in About a Boy where Will must confront the emptiness of his life, to the underground chamber beneath Hogwarts where Harry confronts Voldemort and the loss of his parents in Sorcerer’s/Philosopher’s Stone — modern storytellers are still going underground/deep into their cave to set their Ordeal.

In the abyss, the hero meets death and triumphs over his deepest fears, which symbolizes his death to his old life and resurrection to the new. Victory is won — whether that triumph is achieved through vanquishing the antagonist or through atonement with his Shadow. Or, as Joseph Campbell said, “It is by going down into the abyss that we recover the treasures of life. Where you stumble, there lies your treasure.”


And if our hero can do it in a story, then we can do it in real life. We live vicariously through our hero’s success. If done well, when the book is closed or the movie concluded, we then feel equipped to go back into our life and confront our own demons and monsters. This is the heart of catharsis, and this is why the bestselling books and best remembered movies are those where the hero triumphs over a tremendous obstacle with deep, personal ramifications. It does not matter whether those obstacles are pitched on the intensely personal level or the high-stakes world-wide scale.

As writers, we must remember to send our heroine into the heart of fear. She must go where it’s scariest for her to venture, face those fears head-on, triumph and be forever changed. Only in this way can she return to her world to enrich her clan and ultimately we the writer and our reader.

What abyss have you or your character recently faced and conquered?


Born and raised in North Carolina, Susan Sipal had to travel halfway across the world and return home to embrace her father and grandfather’s penchant for telling a tall tale. After having lived with her husband in his homeland of Turkey for many years, she suddenly saw the world with new eyes and had to write about it.

Perhaps it was the emptiness of the Library of Celsus at Ephesus that cried out to be refilled, or the myths surrounding the ancient Temple of Artemis, but she’s been writing stories filled with myth and mystery ever since.