Charlotte Huang, author of FOR THE RECORD, on pushing yourself to finish something

We're thrilled to have Charlotte Huang here to tell us more about her debut FOR THE RECORD. 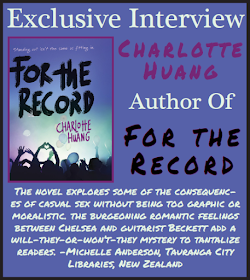 Charlotte, how long did you work on FOR THE RECORD?

Well this is misleading, but the time between starting to write it and going on submission to editors was probably about seven months. But because my husband and many of our friends work in various aspects of the music industry, I had been gathering information for years. Even if it wasn’t intentional with the thought of writing a book one day, it was easily accessible when I needed it.

Hmm, without giving anything away, I have to say that the big, confrontational scenes are always hard for me. It’s hard to force myself to feel those feelings when I don’t have to and I’m also always afraid that they’ll seem overwrought. The scene I’m most proud of is near the end and is, in fact, one of the confrontational scenes!

I wrote different things for a long time before getting published. I’d say I worked at writing in a fairly serious way for at least ten years before getting published. That included taking classes and writing as much as I could. But after I decided that I wanted to write YA novels, things happened quickly. I wrote one novel, queried with it, and managed to find an awesome agent. She encouraged me to write FOR THE RECORD so we could submit that first and that’s what I did.

For writers who are in the beginning stages, my best piece of advice is to finish something. I think you can only truly see what you have to work with once you’ve reached the end. If you find yourself continually abandoning projects in the middle, try pushing yourself to finish one thing.

I’m in the middle of the editorial process with my second YA novel from Delacorte, GOING GEEK. It’s about a girl who has the perfect life and has to start over in her senior year of boarding school when she’s caught in a lie. It’s schedule to come out in fall of 2016! Chelsea thought she knew what being a rock star was like . . . until she became one. After losing a TV talent show, she slid back into small-town anonymity. But one phone call changed everything.

Now she’s the lead singer of the band Melbourne, performing in sold-out clubs every night and living on a bus with three gorgeous and talented guys. The bummer is that the band barely tolerates her. And when teen hearthrob Lucas Rivers take an interest in her, Chelsea is suddenly famous, bringing Melbourne to the next level—not that they’re happy about that. Her feelings for Beckett, Melbourne’s bassist, are making life even more complicated.

Chelsea only has the summer tour to make the band—and their fans—love her. If she doesn’t, she’ll be back in Michigan for senior year, dying a slow death. The paparazzi, the haters, the grueling schedule . . . Chelsea believed she could handle it. But what if she can’t?

Charlotte Huang is a graduate of Smith College and received an MBA from Columbia Business School, which is clearly something every aspiring writer should do. When not glued to her computer, she cheers her two sons on at sporting events and sometimes manages to stay up late enough to check out bands with her music agent husband. Charlotte lives in Los Angeles and is the author of For the Record (Delacorte, 2015)

Have you had a chance to read FOR THE RECORD yet? Do you struggle to write confrontational scenes? Do you need to push yourself to finish projects?