Eric Lindstrom worked in the interactive entertainment industry before writing his debut novel, Not If I See You First (Coming Dec 1), gaining a unique insight of storytelling from the gaming industry. Today, he's on the blog talking about how asking the right questions can make your story come to life.

The fourth doctor of the TV series Doctor Who was my childhood hero. (He still is, but that’s a different story.) In an episode I watched as a teen, he said, “Answers are easy – it’s asking the right questions which is hard.” It was my first exposure to this idea, and it stuck with me.

Over time this perspective became a very useful tool. When I get stuck and can’t find an answer, stepping back and examining my questions often leads to a solution. This process proves itself useful in many different ways, but here I’ll focus on a key example.

Starting out as a writer, I sometimes found myself blocked, wondering, “What should happen next?” I came to understand (over years, not one Saturday afternoon) how that was the wrong question. Tornados happen. Wildebeest migrations happen. But the vast majority of events in a story don’t just happen. Characters make them happen. “What happens next?” is appropriate for the reader to ask, not the writer.


This suggests a more appropriate question: “What would these characters do next?” Or, even more focused: “What would Marisela do next?”

If a good answer comes to mind, I’m unblocked, but if I don’t know what Marisela would do, I’ve still made progress. I’ve uncovered that I don’t know her well enough. It helped me to see that I’m asking, Where should the sofa go? when there’s no house yet. Marisela’s actions should be set aside to first address the more fundamental issue of getting to know her sufficiently to tell her story.

That’s fine while exploring what characters want to do, but sometimes—or often, depending on the genre—a writer wants a particular outcome, or to hit a certain story beat along the way. In those instances I would find myself stuck, wondering, “How do I make XYZ happen?”

The flaw is highly visible here, but it’s still easy to fall into this trap because part of asking the right question is to actually ask the question. Sometimes when I’m stuck, I have to stop and ask, “What exactly am I looking for?” This pushes me to articulate the unformed question in my mind, and then sometimes to see that it’s not a useful one.

Following this process often leads to a lot of work or rework, but it’s necessary to tell authentic stories. For example, the answer to “What would lead Marisela to do XYZ?” might be: “Nothing.” Then I have to ask, “Which is more important to the story I want to tell, Marisela being who she is, or having this particular event occur?” If I’m committed to the event or circumstance, this means changing Marisela’s character by considering: “What kind of person would do this?”

Revising a character can be easy, or it might require a complete overhaul of everything else, not just that character, but this back and forth process is vital to creating authentic stories that readers find believable and compelling. Yet it’s also a process that can continue without end if unchecked, and that’s not productive either.

Here’s a trivial example. I’m cold, but the heater is broken and won’t be fixed till tomorrow, so I move my chair over by the window to sit in the sun. But now the sun’s in my eyes, so I turn my back to it. Now I feel the sun burning the back of my neck, so I drape a scarf across it. This makes me too hot, so I close the blinds, and now I’m cold again. A sweatshirt would solve this, but I got sunburned yesterday and long sleeves sting my arms too much. And so on.

Real life requires compromise because when you have multiple goals, they can’t all be met perfectly. The “right” answer isn’t about achieving perfection; it’s about maximizing how much you can address all your goals based on your priorities. In fiction this balance is even more challenging because there are more considerations than in real life. There are also the meta goals of themes, character arcs, and a myriad others.

Fiction, and even the dramatization of real events, is naturally more constrained than reality with all its boring and thematically meaningless details. Fiction is choreography: the artful contrivance of events for dramatic purposes that resembles reality but isn’t reality. The difference between the dramatization of a day in a character’s life, and an actual day of a real person, filled with disconnected events, is what makes fiction compelling.

So what makes a question “right”? Is it right if the answer unblocks me? Not necessarily. There are more goals in play than authenticity and getting to the next page. Maybe it would have been better to ask, “What would Marisela do that advances her down the redemption path I want for her?” Or maybe, “What would Marisela do now that could fail in a way that requires redemption without alienating the reader?”

These are two different questions; can they both be right? Is one of them more right? This is subjective because it’s about fitness to a purpose. I would actually say, “Which question is right?” is itself the wrong framing because its focus is on the tool. It would be more useful to ask, “Which question is better for getting me where I want to go?”

Is there an even better question out there? Maybe, but finding the ultimate question isn’t the point. As with many things, especially when creating art, it’s important to know when to stop. That’s not easy either.

The Doctor was right. Asking the right questions is hard, but it’s the only way to find a better way. As I grow as a writer, I’m always learning to find better answers to questions that come up in my process; but a major turning point definitely came when I started putting as much energy into asking better questions. Parker Grant doesn't need 20/20 vision to see right through you. That's why she created the Rules: Don't treat her any differently just because she's blind, and never take advantage. There will be no second chances. Just ask Scott Kilpatrick, the boy who broke her heart.

When Scott suddenly reappears in her life after being gone for years, Parker knows there's only one way to react--shun him so hard it hurts. She has enough on her mind already, like trying out for the track team (that's right, her eyes don't work but her legs still do), doling out tough-love advice to her painfully naive classmates, and giving herself gold stars for every day she hasn't cried since her dad's death three months ago. But avoiding her past quickly proves impossible, and the more Parker learns about what really happened--both with Scott, and her dad--the more she starts to question if things are always as they seem. Maybe, just maybe, some Rules are meant to be broken. 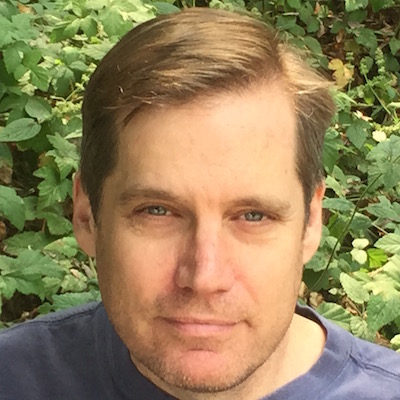 He has also raised children, which led to becoming first a school volunteer, then a substitute teacher, then a part time kindergarten teacher, then getting a credential to teach elementary school, and most importantly the discovery that YA literature is awesome. It’s pretty much all he ever reads, and now writes, in his house near the beach on the west coast, with his wife and, yes, cats.