Todd Strasser, author of THE BEAST OF CRETACEA, on not being afraid to toss words and start again

We're thrilled to have Todd Strasser stop by to tell us more about his latest novel THE BEAST OF CRETACEA. 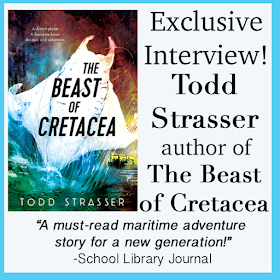 Todd, what was your inspiration for writing THE BEAST OF CRETACEA?


Like a lot of book ideas, the final story turned out to be completely different than the original premise. At first, the idea came from a news article I’d read about the problems and dangers of space debris -- spent rocket stages, old satellites, and fragments from disintegration, erosion and collisions -- that litter the orbits around our planet. There is now so much “space junk” up there that it can literally impact the launching of new satellites and space missions. Something as insignificant as an old screw from a defunct satellite launched 40 years ago could be traveling around the Earth at nearly 20,000 miles per hour. There have already been several instances where impacts with such debris has disabled or destroyed brand new multi-million dollar space missions.

So at first I was going to write a novel about space junk collectors. I remembered reading a story in Boys Life Magazine when I was young about space travelers who sailed through the solar system in vehicles that caught solar winds with enormous sails. So I envisioned space trawlers orbiting the earth towing gargantuan nets in which they’d gather up space junk. (Actually, even though I changed directions in the Beast of Cretacea, that still seems like a pretty cool idea for a book).

But then there had to be danger so I thought the threat of space pirates might be an exciting idea (I'm a big fan of the Pirates of the Caribbean). Around that time I happened to listen to a book called Why Read Moby Dick, basically because it was a question I'd wondered myself a number of times. I had a professor in college who was obsessed with the novel about the great white whale and had had us read parts of it, some of which I found interesting, and others, not.

Anyway, the next thing I knew, I was thinking about a sort of Moby Dick in Space story, which eventually led to the Beast of Cretacea.

Writing the scene where Ishmael and his crew sneak into the pirate's camp to save Queequeg was tough. It had to be exciting, and as original as I could make it, but at the same time it involved a lot of characters doing a lot of different things simultaneously while maintaining, and being limited to, Ishmael’s point of view.

My favorite scenes are the ones set on the ocean with Ishmael and various crewmen battling ferocious sea creatures.

You'd think that Moby Dick would be an obvious choice, but I can’t say I recommend the book, especially to young readers. Some of the books I’ve loved about the ocean were Adrift, The Perfect Storm, Far Tortuga, The Old Man and the Sea, Endurance, Ship of Gold in the Deep Blue Sea, and Looking for a Ship.

How long did you work on THE BEAST OF CRETACEA?

At 432 pages, it's the longest book I've ever written, and, not surprisingly, took the longest amount of time to write. About three years.

What do you hope readers will take away from THE BEAST OF CRETACEA?

First and foremost, I hope readers will be immersed in, and transported by, the story. It's meant to be entertainment. As Publishers Weekly said, “Strasser weaves an engrossing tapestry that evokes a sense of wonder and calls to the imagination.” As I mentioned earlier, there is an important underlying message about the environment, about the Earth's climate, and what humans have done and are doing to our planet. One of the things I like to point out is how often we read or hear about this or that invasive species wreaking havoc with this or that ecosystem. But who has been by far the single most successful invasive species in the history of the Earth? Humans.

I've published more than 100 novels, and I’ve begun, written parts of, and left unfinished, many dozens more. You might assume that after all that, the road to publication for the Beast of Cretacea might not have been very difficult, but actually, it was one of the most challenging for me. The longer a book is, the more loose ends you need to tie together. But even the first hundred pages of this book were difficult. I had to revise them repeatedly. Sometimes you read something you've written and know in your gut that it's not right, but you can't always pinpoint the reason why. Perhaps, if I'd been able to get away from the book for six months and had then given it a fresh look, the problem with that beginning would have been easier to identify. But it was only with the helpful suggestions of several editors as well as my children and a few other readers, that I was finally able to get the beginning to work.

What's your writing ritual like? Do you listen to music? Work at home or at a coffee shop or the library, etc.?
I'm fortunate that I’ve been able to be a fulltime writer for the past 25 years, so basically, I get up in the morning, make coffee, read the paper on line, check a few sites, and get to work. Some days are more productive than others, but sometimes it’s difficult to judge precisely what makes a day “productive.” It’s not just about writing a lot of pages. Some days you might hardly write any, but then have a “breakthrough” idea that will eventually lead to a better book. The other thing is, when I said fulltime writer I truly meant FULL TIME. The writing day doesn't ever end. I could be taking a bike ride and suddenly have a thought about the book I'm working on, or I could be in the car listening to another book and it sparks an idea, or lying in bed, waiting to sleep and something about a character or plot pops into my head (Yes, I have to turn on the light and write it down or I’ll probably not remember in the morning). Every now and then I'll even wake in the middle of the night with the solution to some problem I’ve been dealing with. Even though I'm often not conscious of it, I've come to believe that there must be a part of the brain that's always cogitating about the story, whether I’m aware of it or not.

Write knowing that whatever you're saying will be revised and will change and evolve, possibly to a point where it will no longer bear any resemblance to what you started out with. I was once trying to fix a front step of my house, trying to get this one piece of wood to fit in a place where it didn't seem to want to go. A neighbor was passing by and we discussed the problem I was having. After listening to my tale of woe, he said, "If I were you, I'd chuck that piece and start over with a new piece... I mean, seriously, Todd, it's just wood." He was right, of course, and I chucked the piece I’d been struggling with and cut a new one and it fit just fine. It's the same thing with writing. Don't struggle too hard trying to make things fit. Don’t cling too strongly to what you’ve already written. Don't be afraid to toss words, sentences, paragraphs, even entire chapters away and then start again. After all. They're just words. Master storyteller Todd Strasser reimagines the classic tale of Moby Dick as set in the future—and takes readers on an epic sci-fi adventure.

Todd was born in New York City. When he was young his parents moved to Roslyn Heights, New York (Long Island). Todd went to the I.U. Willets Elementary school and then attended the Wheatley School for junior high and high school. His best subjects were math and science. He also liked to read, but he had trouble with spelling and grammar, and didn't do well in English. His favorite sports were tennis, skiing and fishing. Todd went to college at New York University for a few years, and then dropped out. He lived on a commune, then lived in Europe where he was a street musician.

All the while, Todd wrote songs and poems and lots of letters to his friends back home. Finally he decided to try being a writer. He returned to the United States and went to Beloit College where he studied literature and writing.

In 1990, Todd moved to Westchester County, N.Y. During the next few years, he wrote many movie novelizations, including Home Alone, Free Willy, Ferris Bueller's Day Off and Jumanji. In 1993 Todd wrote Help! I'm Trapped in My Teacher's Body. Since then he has written 16 more Help! I'm Trapped...books, as well as several other series. All together, he has published more than 100 books.

Todd now divides his time between writing books and speaking at schools and conferences. When he's at home, he likes to spend time with his children and dog, Mac. He still likes to fish, play tennis and ski, but his favorite new sport is surfing.


Have you had a chance to read THE BEAST OF CRETACEA yet? Do you find yourself writing in your head while doing other things? Have you struggled with clinging too strongly to what you've already written?