Simon P. Clark, author of TELL THE STORY TO ITS END, on not underestimating the value of community

We're excited to have Simon P. Clark stop by to tell us more about his debut novel TELL THE STORY TO ITS END. 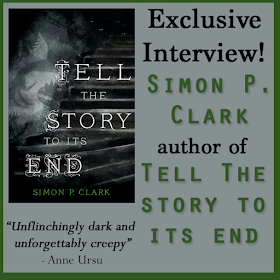 Simon, what was your inspiration for writing TELL THE STORY TO ITS END?

In a way, Tell The Story... is a response to David Almond's Skellig, which was the first book I fell in love with as a young reader. Almond's a master of storytelling and subtle, powerful writing. One of the highlights of getting published was when he gave us some fantastic quotes to use on the UK cover.

How long did you work on TELL THE STORY TO ITS END?

Oh, years. It was a strange process, in the end (although that's probably true for all novels). The idea behind the book is very old - I started a draft of it when I was maybe fifteen. It didn't pan out, and life moved on. Years later, while I was living in Japan, I picked it up again for National Novel Writing Month, changed the main character, and changed the setting to be contemporary. I didn't manage to finish in a month - or even a year - but the first draft was done about two years after that.

That writing is about so much more than plot. That you can't fake things - including the world in which the story takes place. As for myself, I learned that when I really try - and put my whole heart behind it - I can learn how to spell bearueu. (Wait, that's not right, is it? Bugger)

What do you hope readers will take away from TELL THE STORY TO ITS END?

At the end of the day, I hope they like it and would read more things by me.

I wrote some pretty terrible books before this one. My first book was a dire rehash of Harry Potter set on 'the Moors of Magic'. I've destroyed all copies of it except one, which is on a floppy disc. My road to publication was typical, but difficult. Getting an agent was the real break for me.

There was a moment years ago when I was invited out by some friends and I turned them down because writing was more important. That was a big deal for me - it meant I was taking it seriously, and saw it as 'real work.'

No music ever! I sing along. I get distracted. Chatter I can deal with, so coffee shops are fine, but if they play music - nope. Silence is golden, I guess.

Do not underestimate the value of community. Writing is solitary but publication is a messy, crowded party. Find other writers - on Twitter, through libraries - and stick with them. Celebrate their books and their careers. We need each other. I love my writing buddies (many of whom I've never even met).

A dark middle grade fantasy that I promised my publisher about a year ago. Whoops. I'm also keeping up Eren Tales (www.erentales.com), a collab project of short stories and artwork that compliments Tell The Story To Its End. In this beautiful, haunting debut, a boy is whisked away to the country in the wake of a scandal, and finds a captivating creature in the attic whose attention comes at a sinister price.

"Tell the story to its end," says Eren with a grin.
His yellow eyes are glowing like embers in the night.
"When I reach the end," I say, "what happens? You'll have the whole story."
"Hmm," he says, looking at me and licking his lips with a dry, grey tongue. "What happens then? Why don't we find out?"

People are keeping secrets from Oli. His mum has brought him to stay with his aunt and uncle in the countryside, but nobody will tell him where his father is. Why isn't he with them? Has something happened? Oli has a hundred questions, and only an old, empty house in the middle of an ancient forest for answers. But then he finds a secret of his own: there is a creature that lives in the attic…

Eren is not human.
Eren is hungry for stories.
Eren has been waiting for him.

Sharing his stories with Eren, Oli starts to make sense of what’s happening downstairs with his family. But what if it’s a trap? Soon, Oli must make a choice: learn the truth—or abandon himself to Eren’s world, forever.

Reminiscent of SKELLIG by David Almond and A MONSTER CALLS by Patrick Ness, EREN is richly atmospheric, moving, unsettleing, and told in gorgeous prose. A modern classic in the making.

Simon P. Clark is a children's author living and working in the UK. Originally from Britain, he has lived and worked in Japan and the USA. His debut novel Eren was published in the UK by Atom, an imprint of Little, Brown in September 2014, and will be published in the US by St Martin's Press in October 2015 as Tell The Story To Its End.

---
Have you had a chance to read TELL THE STORY TO ITS END yet? Have you turned down socializing with friends in order to write? Do you have writing buddies to help with the ups and downs of writing?