Sara Raasch, author of ICE LIKE FIRE, advises us to keep moving forward

ICE LIKE FIRE is the second book in the Snow Like Ashes series, and we're delighted to have Sara Raasch here to share more about it. 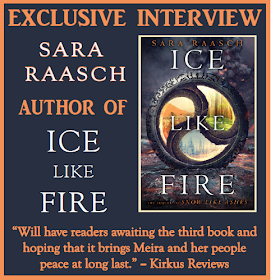 Sara, what scene was really hard for you to write and why, and is that the one of which you are most proud? Or is there another scene you particularly love?

Chapter 9 was always a struggle (to write and edit) because it was extremely draining, emotionally -- which also makes it one of my favorite scenes in the book, because it is SO emotionally charged. I won't say too much about it because SPOILERS but I will say that it is the absolute worst of the love triangle drama in the entire book.

What do you hope readers will take away from ICE LIKE FIRE?

The one overarching thing I always hope readers take away from this series is that they are enough, as they are, without any outside influence or changes or anything -- a lesson Meira learns over and over.

I'm currently working on edits for Book 3, which is the perfect amalgamation of SLA's action and ILF's political intrigue. I can't believe it's almost over! They grow up so fast! It’s been three months since the Winterians were freed and Spring’s king, Angra, disappeared—thanks largely to the help of Cordell.

Meira just wants her people to be safe. When Cordellan debt forces the Winterians to dig their mines for payment, they unearth something powerful and possibly dangerous: Primoria’s lost chasm of magic. Theron sees this find as an opportunity—with this much magic, the world can finally stand against threats like Angra. But Meira fears the danger the chasm poses—the last time the world had access to so much magic, it spawned the Decay. So when the king of Cordell orders the two on a mission across the kingdoms of Primoria to discover the chasm’s secrets, Meira plans to use the trip to garner support to keep the chasm shut and Winter safe—even if it means clashing with Theron. But can she do so without endangering the people she loves?

Mather just wants to be free. The horrors inflicted on the Winterians hang fresh and raw in Januari—leaving Winter vulnerable to Cordell’s growing oppression. When Meira leaves to search for allies, he decides to take Winter’s security into his own hands. Can he rebuild his broken kingdom and protect them from new threats? As the web of power and deception weaves tighter, Theron fights for magic, Mather fights for freedom—and Meira starts to wonder if she should be fighting not just for Winter, but for the world.

Sara Raasch has known she was destined for bookish things since the age of five, when her friends had a lemonade stand and she tagged along to sell her hand-drawn picture books too.

Not much has changed since then — her friends still cock concerned eyebrows when she attempts to draw things and her enthusiasm for the written word still drives her to extreme measures.

Neither features her hand-drawn pictures.

Have you had a chance to read ICE LIKE FIRE yet? What about the first book in the series SNOW LIKE ASHES? Do you often write scenes that are emotionally draining?