Roland Smith, author of THE EDGE, on spending thousands of hours honing your craft

THE EDGE is the sequel to PEAK, and we're thrilled to have Roland Smith stop by to discuss writing. 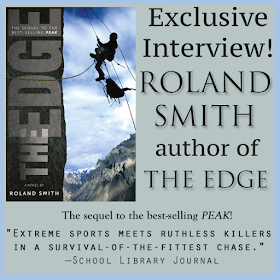 Roland, how long did you work on THE EDGE?

I write everyday. If I finish a novel and send it into the publisher on a Sunday evening, the next morning I start work on the next novel. I prefer to write in my little room at home surrounded by all my stuff, but that is not always possible. I spend a good part of the year traveling and speaking, which means I write on airplanes, trains, cruise ships, walks (with a digital recorder). I write in hotel rooms, airports, libraries, coffee shops, restaurants. Wherever I happen to be, whenever I have five or ten minutes to spare, I try to spend it writing. I don’t need long blocks of time to get into the mood (whatever that is). I just need enough time during any given day to get my designated word count on paper, which is a thousand words a day when I’m home, and five hundred words a day when I’m out and about. The trick is to carry the book I’m working on with me twenty-four hours a day, which these days is easily accomplished with all the electronic gizmos that are available. In the end though, all you really need to write a book is pencil and paper.

I think anyone can write a book, perhaps even a good book, if you are willing to spend thousands of hours honing your craft. Most people can’t, or are not willing to do this. I don’t blame them. They have better things to do. I would guess that I spent over ten thousand hours practicing writing before my writing was any good. If you were to break that down into eight hours a day, seven days a week, that would be over three years of full-time writing practice. And just so you know, even though I’ve been relatively successful (25 novels still in print), and make my living writing books, I am still practicing. The International Peace Ascent is the brainchild of billionaire Sebastian Plank: Recruit a global team of young climbers and film an inspiring, world-uniting documentary. The adventure begins when fifteen-year-old Peak Marcello and his mountaineer mother are helicoptered to a remote base camp in the Hindu Kush Mountains on the Afghanistan-Pakistan border. When the camp is attacked and his mother taken, Peak has no choice but to track down the perpetrators to try to save her. Fans of the bestselling Peak will be thrilled with this gripping, high-stakes sequel.

Roland Smith is an American author of young adult fiction as well as nonfiction books for children.
Smith was born in Portland, Oregon, and graduated from Portland State University and, following a part-time job at the Oregon Zoo in Portland, began a 20-year career as a zookeeper, both at the Oregon Zoo and the Point Defiance Zoo in Tacoma, Washington. After working to save wildlife following the Exxon Valdez oil spill, in 1990, he published his first book, Sea Otter Rescue, a non-fiction account of the process of animal rescue. Smith continued to draw upon his zoo experiences for other non-fiction titles, including Journey of the Red Wolf, which won an Oregon Book Award in 1996.

In 1997, Smith published his first novel, Thundercave. The book continues Smith's theme, as teenage protagonist Jacob Lansa follows his biologist father to Africa where the father is researching elephants. The Lansa character also appears in 1999
s Jaguar and 2001's The Last Lobo. Other novels by Smith include The Captain's Dog: My Journey with the Lewis and Clark Tribe, Zach's Lie, Jack's Run, Cryptid Hunters, Sasquatch (novel), about a boy who searches for Bigfoot. Peak, the story of a teenage boy obsessed with climbing mountains, Elephant Run and Tentacles(novel). In 2008, Smith published the first book in the series I, Q, titled Independence Hall. Smith's books have won "Book of the Year" awards in Colorado, Nevada, South Carolina, and Florida, as well as in his native Oregon. Smith lives in Tualatin, Oregon with his wife and stepchildren.


Have you had a chance to read THE EDGE yet? How much time do you spend thinking about your story versus writing it? How many hours have you put into practicing your craft?