We had a slight scheduling error on today's WOW Wednesday post. Sorry to all those who were expecting the post this morning!

Today, we welcome the wonderful Jen Larsen to the blog. Jen's YA debut, the uplifting FUTURE PERFECT was released into the world only yesterday, and today she's sharing some tips on overcoming writer's block in order to get that book out into the world. 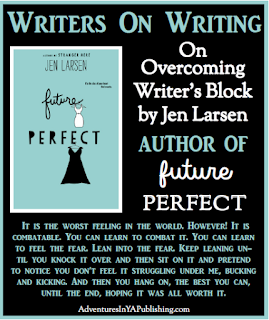 I’ve written four books and countless essays and stories and blog posts but the idea of starting anything, and sometimes sitting down in front of my laptop and staring at a blank screen, can send me into a total panic. This you may recognize as writer’s block, and it is the worst feeling in the world.

However! It is combatable. You can learn to combat it. You can learn to feel the fear. Lean into the fear. Keep leaning until you knock it over and then sit on it and pretend to notice you don’t feel it struggling under me, bucking and kicking. And then you hang on, the best you can, until the end, hoping it was all worth it.


For me, a new project usually went like this:

Day one: New project! Hooray! We love new projects and this book/story/essay is going to be just the coolest I can’t wait to share it with the whole wide world. Hooray, am I right? I am so right!

Days two and three: House has never been cleaner and Twitter never so closely followed.

Days seven through tiny breakdown:
So! Projects used to take rather longer than I would have liked them to. Project sometimes never got off the ground. I have lost and forgotten and given up so many ideas because of this exhausting, consuming, ridiculous, comically terrible terror that I think affects so many writers so often that sometimes we are just walking around afraid all the time instead of writing.

Where does it come from? What the hell is there to be afraid of?

So many things. That it won’t turn out the way you want it to. That it won’t turn out the way other people want it to, and they’d hate it and you and you’d have to move to Bermuda and live in a palm tree. That you would be embarrassed that you ever had such a stupid idea in the first place. That your idea was just a pale imitation of someone else’s much bigger, more beautiful and knock-you-over idea and you should just give up. That you aren’t good enough.

That all boils down, I think, into fear of putting your work out into the world. Sharing something huge and important and personal that you worked your ass off to make awesome, hoping people will look at it and go YES IT IS AWESOME. Knowing that the corollary to that is: YES YOU ARE AWESOME.

It’s easy to say—well, write for yourself. And we do. We all do. I am willing to say every single person who calls themselves a writer couldn’t possibly, in any way, do anything but write for themselves. They write what makes them happy, what they want to read, what they love, what’s important to them.

The thing about writing though, is that it’s a shared experience, and we know that. We feel it all the time, when we’re thinking and working and daydreaming. It’s meant to be seen, interacted with, thought about. Nothing is ever written in a vacuum; you’re responding to everything you’ve seen or thought about or touched in the world. You’re responding to everything you’ve ever read, which is one of the most important and best things about prose—that it has a huge life outside of you, and that’s one of the reasons authors write—it’s such an enormous, all-encompassing part of what we do we sometimes forget it’s there, surrounding and sheltering everything else.

Of course I’m talking about novels, poetry, memoirs, plays, essays, blog posts—public writing. The stuff you write in your journal or your freewriting notebook or whatever kind of personal writing you may do is so much more intimate, never meant to be anything but quiet, and that’s exactly why it’s easy. It’s not because it doesn’t matter—of course it matters. But it only matters to you.

So. To sum up. Expectations cause terror, can cause what feels like writer’s block, which is actually probably, possibly more accurately described as performance anxiety and why I have spent so much of my life living in a tree in Bermuda and so much less of my life writing the things I wanted to write.

Figuring that out felt like a revelation. A big, huge, honking WELL DUH smack yourself in the forehead kind of revelation.

The thing that shook me out of my fear and let me say well, forget this, I am not going to let this bother me any more, was just this: a solemn promise to myself that no one ever, ever has to read what I have written.

If I pretend that I am going to write this chapter (or essay or poem or page or anything) and then drop my laptop directly into a volcano the moment I’m done, I can write anything. I can say anything. There is no fear of the future—there’s just spending a whole bunch of time happily typing away any kind of nonsense I want with no fear of consequences, just the pleasure of writing.

Because that’s what is always so easy to forget, if you’re directly in the middle of being terrified, when you’re afraid to start, when you feel so paralyzed—you love writing. That’s why you keep flinging yourself at the blank page, despite everything. Because in the end, it’s worth it. 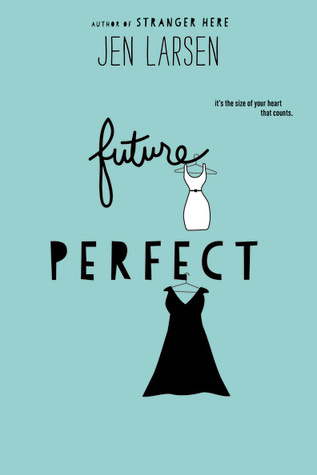 Every year on her birthday, Ashley Perkins gets a card from her grandmother—a card that always contains a promise: lose enough weight, and I will buy your happiness.

Ashley doesn’t think there’s anything wrong with the way she looks, but no amount of arguing can persuade her grandmother that “fat” isn’t a dirty word—that Ashley is happy with her life, and her body, as it is.
But Ashley wasn’t counting on having her dreams served up on a silver platter at her latest birthday party. She falters when Grandmother offers the one thing she’s always wanted: tuition to attend Harvard University—in exchange for undergoing weight loss surgery.

As Ashley grapples with the choice that little white card has given her, she feels pressured by her friends, her family, even administrators at school. But what’s a girl to do when the reflection in her mirror seems to bother everyone but her?

Through her indecisions and doubts, Ashley’s story is a liberating one—a tale of one girl, who knows that weight is just a number, and that no one is completely perfect.

Jen Larsen is a full-time writer and feminist. She has an MFA in creative writing from the University of San Francisco, and currently lives in Minneapolis with her sweetheart and a menagerie.