Linda Buckley-Archer, author of THE MANY LIVES OF JOHN STONE, on getting a story out of her system

We're excited to have Linda Buckley-Archer join us to share more about her latest novel THE MANY LIVES OF JOHN STONE. 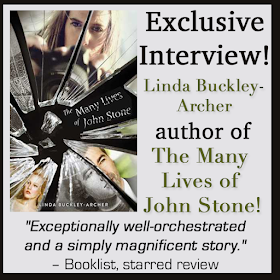 Linda, what was your inspiration for writing THE MANY LIVES OF JOHN STONE?

Almost twenty years ago, when I was just beginning to write, I made a note to myself that it would be good to write a story that was something about “eternal legacies”. I also noted down that the story would involve “Friends” who would help keep a secret over centuries. Then, about five years ago, I had a kind of ‘waking dream’ in which I saw a boy following an old man into a cave. It wasn’t much to go on, but the scene resonated and stayed with me (eventually this became a central scene). Then a chance conversation with my son, who was studying biochemistry at the time, led me to find out about ‘telomeres’, the ‘caps’ which help protect chromosomes. Human aging is a very complex process, but imagining a man who, for example, had particularly robust telomeres, among other genetically inherited characteristics, led me to the creation of John Stone (who became the boy in the cave scene). He doesn’t possess superpowers, he’s not an immortal, nor a vampire, he is simply a man with a set of genes that predisposes him to very long life. I wondered how a man who could outlive a tree would survive in the world, and what kind of person he would become.

The hardest scene to write is also the one of which I’m proudest. It’s the final scene in the orchard at Stowney House. I hope I managed to convey the lyrical tone I had imagined.

How long did you work on THE MANY LIVES OF JOHN STONE?

It took four years to get it the way I wanted. I had great help from my editor, David Gale, at Simon & Schuster, and his assistant Liz Kossnar.

I really needed to get this story out of my system. The questions it posed meant a lot to me. I was aware that I was taking a risk by having two narratives in one book, and I was aware that having two protagonists – a 17-year-old girl and a 350-year-old man – was unconventional fare for a teen book. But as a writer you know when the seed, the germ of a story really comes alive for you, when it moves you. And this one did. So I wanted to remain true to it. It is what it is.

What do you hope readers will take away from THE MANY LIVES OF JOHN STONE?

I am always grateful if readers take anything from my writing: it’s humbling to have another person spend their time reading your words. To answer your question, I suppose what I hope readers might take from the novel is to question what constitutes a life. And I’d be pleased if my novel encouraged readers to reflect on the relationship between different generations: how the old need the young and the young need the old, and how family (the kind we’re given, or the kind we make for ourselves) can give life its meaning. I also hope it might encourage some readers to go see for themselves the Hall of Mirrors at the Chateau of Versailles – as L. P. Hartley wrote, “the past is a foreign country: they do things differently there.”

I do my best creative thinking half asleep, in the shower or on trains. When the good ideas come you’ve just got to chase after them with a butterfly net wherever you are. My editing I tend to do at home, hunched over my computer, feeling guilty that I’m not getting enough exercise. I’m a perfectionist and find it hard to stop messing with my sentences.

Although I am considering writing a companion volume to THE MANY LIVES OF JOHN STONE, I am currently focussing on an exciting Middle Grade science fiction mystery. An English teen questions all she knows about aging when she encounters a set of journals that date from the present back to the reign of King Louis XIV in this blend of contemporary and historical fiction from the author of the acclaimed Gideon trilogy.

Stella Park (Spark for short) has found summer work cataloging historical archives in John Stone’s remote and beautiful house in Suffolk, England. She wasn’t quite sure what to expect, and her uncertainty about living at Stowney House only increases upon arriving: what kind of people live in the twenty-first century without using electricity, telephones, or even a washing machine? Additionally, the notebooks she’s organizing span centuries—they begin in the court of Louis XIV in Versailles—but are written in the same hand. Something strange is going on for sure, and Spark’s questions are piling up. Who exactly is John Stone? What connection does he have to these notebooks? And more importantly, why did he hire her in the first place?

Linda Buckley-Archer is a London-based writer. Originally trained as a linguist and subsequently a scriptwriter, she became a novelist after writing a story for her son, who was a reluctant reader. That story became the first volume of the time-traveling GIDEON TRILOGY, which featured the dark side of 18th-century London as well as the French and American Revolutions. The trilogy was translated into ten languages. Her latest novel, THE MANY LIVES OF JOHN STONE, is published on 20th October, 2015.

Have you had a chance to read THE MANY LIVES OF JOHN STONE yet? Do you ever need to get a story out of your system? Do you chase ideas with a butterfly net?