Lauren Baratz-Logsted, author of RED GIRL, BLUE BOY, on reading everything you can get your hands on

We're delighted to have Lauren Baratz-Logsted join us to share more about her latest novel RED GIRL, BLUE BOY. 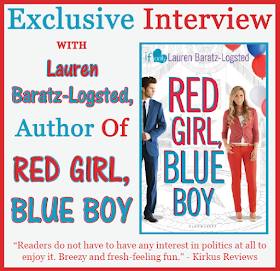 Lauren, what was your inspiration for writing RED GIRL, BLUE BOY?

I love politics! And as soon as the idea hit me - a teenage boy and girl from Connecticut, who meet when his mother and her father become the Democratic and Republican candidates for the highest office in the land - I just had to write it.

Whenever I get this question, I think: It would take me writing a book to tell the whole story! My short version is that I left my day job in 1994 to take a chance on myself as a writer. Nearly eight years later - having written seven books, gone through several agents and had as many as four simultaneous part-time jobs to keep the rent paid - I sold what would be my first published novel (The Thin Pink Line, a dark comedy about a woman who fakes an entire pregnancy) on my own as part of a two-book deal. There are still some books I've written that have not sold, but if my math skills are working, RED GIRL, BLUE BOY will be my 25th published book.

I always say the same thing to this question, because it's the best advice I know of to give. Read, read, read - read everything you can get your hands on, because you can't be a good writer without being a great reader first - and always remember: the only person who can ever really take you out of the game is you.

I LOVE YOU, MICHAEL COLLINS, a Middle Grade novel which will be published by Farrar, Straus and Giroux in Spring 2017. It's set in 1969 and is about a 10-year-old girl who strikes up a one-sided correspondence with the least famous astronaut heading for the moon on Apollo 11. Enjoy Red Girl, Blue Boy and the other standalone titles in Bloomsbury’s contemporary If Only romance line centered around an impossible problem: you always want what you can’t have!

Sixteen-year-old Katie and Drew really shouldn’t get along. After all, her father is the Republican nominee for President of the United States while his mother is at the top of the Democratic ticket. But when Katie and Drew are thrown together in a joint interview on a morning talk show, they can’t ignore the chemistry between them. With an entire nation tuned into and taking sides in your parents’ fight, and the knowledge that—ultimately—someone has to lose, how can you fall in love with the one person you’re supposed to hate?

This title in the If Only line is a frank and funny romance that shows how sparks fly when opposites attract.

Lauren grew up in Monroe, CT, where her father owned a drugstore at which her mother was the pharmacist. She is a graduate of the University of Connecticut at Storrs, where she majored in psychology. She also has what she calls her “half-Masters” in English from Western Connecticut State University (five courses down, another five to go…someday!).

Throughout college, she worked semester breaks as a doughnut salesperson, a job that she swears gave her white lung disease from all the powdered sugar she breathed.

Upon graduation, she began work at the venerable independent spacebookseller, now sadly defunct as such, Klein’s of Westport. There, she bought and sold for the better part of 11 years.

In November 1994, Lauren left the bookstore to finally take a chance on herself as a writer. Success did not happen over night. Between 1994 and May 2002 – when Red Dress Ink called with an offer to buy THE THIN PINK LINE – Lauren worked as a book reviewer, a freelance editor and writer, and a window washer, making her arguably the only woman in the world who has ever both hosted a book signing party and washed the windows of the late best-selling novelist Robert Ludlum.

Since Red Dress Ink’s call in 2002, Lauren has been kept very busy with writing more novels and checking her Amazon ranking on a daily basis. She still lives in Danbury, with her husband and daughter, where she has lived since 1991.

In addition to writing, Lauren’s daughter keeps her busy, accounting for the rest of her time.

Have you had a chance to read RED GIRL, BLUE BOY yet? How impressive is it that Lauren has published 25 books? Are you doing everything you can to keep yourself in the game?