We're welcoming the super talented, multi award winning Jennifer Donnelly to the blog today to talk about the importance of never giving up. Despite her success, Jennifer's road to publishing was long and, for all us hopefuls, proof that good things come to those who wait. Enjoy! 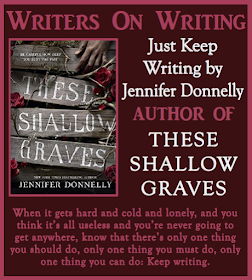 I waited years for The Call. Ten years, in fact.

Like my first novel, The Tea Rose, the story of how I finally got The Call is a rags-to-riches tale. Got a few minutes? Good. Pull up a chair.
I was in my mid-twenties when I started to write The Tea Rose. I’d gotten the idea for the book a few years earlier, while I was a student in London. My then-landlord, Clark, took me to the Brick Lane market in Whitechapel. Clark loved antiques. He had a Model A Ford. We drove east from Notting Hill early one Sunday morning. This was the mid-80s and East London was totally off the map. There were no wine bars or posh hotels, then. No multi-million dollar flats or art galleries. There were lots of crumbling houses, though. And dark, cobbled alleys. There were smoky pubs, boarded-up warehouses, and silent, brooding wharves.

I’d read about this area; it was notorious. It was Jack the Ripper’s London. Ben Tillet’s London. The Kray brothers’ London. It was a worker’s London, where dockers, factory hands, builders, seamen, and costers lived. The smallness and plainness of the houses spoke of hard lives and meager resources.

Clark pulled up just before a rusted railway overpass. As he cut the engine, I heard music. When we emerged on the other side of the bridge, I discovered its source. Burly costermongers were singing the praises of their fruits and vegetables. They smiled and winked as they did, their voices rising in competition. Watching them, I felt as if I’d left modern-day London and stumbled into the same city that Johnson, Hogarth and Dickens knew. We bought some clementines and walked on, passing in and out of musty warehouses, stalls, sheds and old stables. Picking up trinkets. Tripping on cobbles. Sampling apple fritters, jellied eels, pickled whelks. I found a rhinestone necklace for a pound. A tweed jacket for two. Clark found a toilet.

I found something else that day, too — inspiration. East London was a shadow city to the western metropolis, a place to soothe a darker heart. It was honest and raw and in its own hard way, breathtakingly lovely. I fell in love with it then and there and knew that I wanted to write about the place and its people.

And so, a few years later, I started. I started the way you just start things when you’re young and optimistic and energetic and a little stupid. I jumped in with both feet.

I loved words. I loved books. I knew I could write. I’d been a reporter, a copywriter. I had a story idea. What else did I need?

A lot, as it turned out. I needed a skin as thick as a rhino’s. The endurance of a mountain climber. Persistance, courage, and faith. (A bottle of Prozac would have helped, too.)

So I started writing.

But it didn’t matter. The story didn’t work. It didn’t flow. It bogged down in description. It meandered. So I ripped up what I had and started again. And again. A year passed. Two. Five. Eight. I watched my friends got ahead in their chosen fields while I cobbled together a living from part time jobs, temp jobs, freelance jobs. I watched others get agents, get editors, get contracts, get published.

And I kept writing.

Frustration set in. A sense of futility. Depression. Despair. I took hope, no matter how slim, from wherever I could find it: horoscopes, songs, fortune cookies. I picked up lucky pennies and wished on stars.

And I kept writing.

And then one day, I had it – a finished manuscript. I knew it wasn’t perfect. But some people – my family, my friends – liked it.

It was time to get an agent. Once again, not knowing what I was doing, I got out a big fat guide to literary agencies and sent a letter to every single one that sounded nice. Luckily I got a response from an agent at a very good one – Writers House – inviting me to submit my work. His name was Simon Lipskar. He read my work, told me the good news: “You can write,” then told me the bad news: “You need to do a lot of work on the structure. On plot. On pacing.”

I started again. Rewriting. Reworking. Trimming down a 1,000 page manuscript to a workable size.
I kept writing.

It took me another year to get the manuscript right. Another year of frustration. Of going back and forth with Simon, page by page. Of tears and doubt and worry.

But I kept writing.

And finally, it was done. Again. It was polished and perfect and I thought we’d sell it immediately. I was so wrong.

The manuscript was rejected from every publishing house in New York, and a few outside of it. Simon tried hard to sell it for over a year. And then I got a call. Not The Call, not by a long shot. It was Simon, and he was calling to tell me we he’d tried everything and everywhere and he couldn’t sell it. At least, not yet. We had to take a break. Put it on a shelf.

I was so down, I can’t even describe it. Ten years of my life. All that work. All that sacrifice. Such a labor of love. And no one wanted it.

My wonderful husband took me for a weekend away. If he hadn’t, I think I would have jumped off the Brooklyn Bridge. My mom and dad and sister told me to keep the faith. I thought they were all nuts.

I went back to work. I tried to forget I’d ever written a book. Weeks passed. Then months. It was winter.

And then one dreary, cold, gray afteroon, as I was sitting at my desk at Saks Fifth Avenue, writing ad copy, the phone rang. It was Simon.

There was excitement in his voice, I could hear it. My heart started thumping. My hands went cold. And sure enough, he said the words I’d been waiting to hear for a decade: “I have an offer for The Tea Rose.” There was an editor a St. Martin’s – a new hire – and she liked it.

It wasn’t riches, not even close. But it didn’t need to be. It was priceless. I said “Yes.” And then I called my huband and my parents, who’d been there for me every step of the way, then I told my copywriting pals, who cheered, and then I went for a walk on Manhattan’s streets – feeling like I finally had a right to walk them, to stand tall upon them.

I bought a bottle of champagne, went home and drank it with my husband, and danced on our dining room table. After ten long years, I’d made it. I was a writer. Soon I’d be an author.

Set in gilded age New York, These Shallow Graves follows the story of Josephine Montfort, an American aristocrat. Jo lives a life of old-money ease. Not much is expected of her other than to look good and marry well. But when her father dies due to an accidental gunshot, the gilding on Jo’s world starts to tarnish. With the help of a handsome and brash reporter, and a young medical student who moonlights in the city morgue, Jo uncovers the truth behind her father’s death and learns that if you’re going to bury the past, you’d better bury it deep. 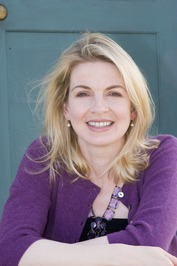