Jennifer Donnelly, author of THESE SHALLOW GRAVES, on carrying on two conversations at once

We're honored to have Jennifer Donnelly swing by to tell us more about her latest novel THESE SHALLOW GRAVES. 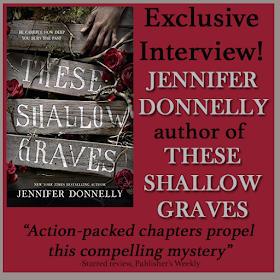 Jennifer, what was your inspiration for writing THESE SHALLOW GRAVES?

This story started with a dead guy.

A man with weird markings on his face showed up in my head. He had long dark hair and was wearing clothes from another time.

Who are you? I asked him. What do you want?

But he wouldn’t answer. He just lay in his coffin with his hands folded over his chest, decay beginning to creep. He wouldn’t leave, either. And since he wasn’t going to explain himself, I needed someone who would.

That’s when other people started showing up: a teenaged reporter named Eddie, a thief lord called the Tailor; Oscar, a coroner’s assistant. And a girl. Her name was Josephine Montfort.

Jo immediately intrigued me. I could tell she was wealthy and educated from the way she dressed and spoke. And yet, something wasn’t quite right. I sensed that her porcelain coolness was only a veneer, and that underneath it, a fierce intelligence burned. In her gray eyes, I glimpsed a restless longing.

I learned that she’d been born into an old and distinguished New York family, and that she led a life of privilege. Jo was fortunate in many ways, but she didn’t have the one thing she wanted the most: freedom.

I met Edith Jones, brilliant and misunderstood, and watched her marry the wrong man and live the wrong life—until she found the right life, and became Edith Wharton.

I met eighteen-year-old Lizzie Schauer who was arrested, imprisoned, and subjected to medical examinations to determine whether or not she was of good character – all for the “crime” of being an unaccompanied female walking alone in the city at night.

I met Consuelo Vanderbilt, a teenage heiress, forced to marry the Duke of Marlborough, a man she didn’t love, to satisfy her domineering mother’s social ambitions.

I met scores of teenage girls for whom education was only a dream—and the factory floor or scullery or sweatshop, a reality.

Edith eventually broke free. Consuelo, too. I doubt poor Lizzie, or the scullery girls, ever did.

I so badly wanted Jo to. And thanks to the dead man, she finally did. He gave Jo her life, and by the end of the book, he gave me my peace. He stopped haunting me and went on his way.

Jo’s on her way now, too. And I can’t wait to see where life takes her.

I can't write my novels anywhere but at my desk, with my books and my dogs and my teapot beside me. On weekdays, I usually get started around 8:30 and knock off around 5. If I'm under a tight deadline, though, I go until 10 or 11 p.m. I sneak in work time over most weekends, too. My characters don't observe visiting hours. They're with me all time--during the day, at night, on grocery runs, at dinner parties. I'm often carrying on two conversations at once -- one with a real friend, and one with an imaginary one! Set in gilded age New York, These Shallow Graves follows the story of Josephine Montfort, an American aristocrat. Jo lives a life of old-money ease. Not much is expected of her other than to look good and marry well. But when her father dies due to an accidental gunshot, the gilding on Jo’s world starts to tarnish. With the help of a handsome and brash reporter, and a young medical student who moonlights in the city morgue, Jo uncovers the truth behind her father’s death and learns that if you’re going to bury the past, you’d better bury it deep.

Jennifer’s first novel, The Tea Rose, an epic historical novel set in London and New York in the late 19th century, was called “exquisite” by Booklist, “so much fun” by the Washington Post, a “guilty pleasure” by People and was named a Top Pick by the Romantic Times.

Her second novel, A Northern Light, set in the Adirondacks of 1906, against the backdrop of an infamous murder, won the Carnegie Medal, the Los Angeles Times Book Prize, the Borders Original Voices Award, and was named a Printz Honor book. Described as “rich and true” by The New York Times, the book was named to the Best Book lists of The Times (London), The Irish Times, The Financial Times, Publishers Weekly, Booklist and the School Library Journal.

Revolution was named a Best Book by Amazon, Kirkus, School Library Journal, and the Chicago Public Library, and was nominated for a Carnegie Medal. The audio edition was awarded an Odyssey Honor for Excellence.