DARK TIDE is the third book in the Waterfire Saga, and we're thrilled to have Jennifer Donnelly here to chat about writing. 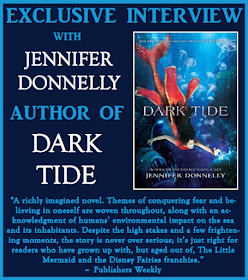 Jennifer, what did this book teach you about writing or about yourself?

DARK TIDE, and all the Waterfire books, are on a much faster publishing schedule than I've ever dealt with. To meet my deadlines, I've had to change the way I write and stop fussing endlessly about every word, sentence, and paragraph...in the first draft. I've learned to push hard to get the first draft done -- and to keep going no matter what, even if parts of the story are messy, incomplete, or downright lame. Finishing the first draft is crucial. Do that, and then fuss -- because you have to make the story, before you can make the story good.

My road was both long and hard. I worked for ten years on my first novel, and when it was finally done, it was rejected by pretty much every publishing house in New York! It eventually did sell, I'm happy to say, thanks to my agent Simon Lipskar at Writers House, who never gave up on the book. DARK TIDE is my ninth novel, and I'm very fortunate in that all the books I've written have been published.

Don't give up. The world is full of people who are more than happy to tell you No. No, you won't make it. No, you'll never get published. Don't listen to them, don't join them. Keep going, keep faith in yourself and your work, and never, ever give up. No one can ever guarantee that you will get published, but one person can guarantee that you won't -- you. By quitting. So don't.

I'll soon be working on revisions to SEA SPELL, the fourth and final Waterfire Saga book, and then it's on to a new, top-secret project! I can't wait! Once a lost and confused princess, Serafina is now a confident leader of the Black Fin Resistance (BFR). While she works on sabotaging her enemy and enlisting allies for battle, her friends face challenges of their own. Ling is in the hold of Rafe Mfeme's giant trawler, on her way to a prison camp. Becca meets up with Astrid and learns why the Ondalinian mermaid is always so angry: she is hiding a shameful secret. Ava can't return home, because death riders await her arrival. And it is getting more and more difficult for Mahdi, Serafina's betrothed, to keep up the ruse that he is in love with Lucia Volerno. If Lucia's parents become suspicious, his life--and all of Sera's hopes--will be extinguished. Political intrigue, dangerous liaisons, and spine-tingling suspense swirl like a maelstrom in this penultimate book in the WaterFire saga.

Jennifer’s first novel, The Tea Rose, an epic historical novel set in London and New York in the late 19th century, was called “exquisite” by Booklist, “so much fun” by the Washington Post, a “guilty pleasure” by People and was named a Top Pick by the Romantic Times.

Her second novel, A Northern Light, set in the Adirondacks of 1906, against the backdrop of an infamous murder, won the Carnegie Medal, the Los Angeles Times Book Prize, the Borders Original Voices Award, and was named a Printz Honor book. Described as “rich and true” by The New York Times, the book was named to the Best Book lists of The Times (London), The Irish Times, The Financial Times, Publishers Weekly, Booklist and the School Library Journal.

Revolution was named a Best Book by Amazon, Kirkus, School Library Journal, and the Chicago Public Library, and was nominated for a Carnegie Medal. The audio edition was awarded an Odyssey Honor for Excellence.