Heather Hepler, author of FROSTED KISSES, on triggering her claustrophobia

FROSTED KISSES is the next novel in the Cupcake Queen series, and we're pleased to have Heather Hepler join us to share more about it. 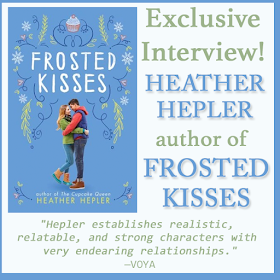 Heather, what scene was really hard for you to write and why, and is that the one of which you are most proud?

The scene that was the hardest for me to write was a total surprise for me. I usually anticipate very emotional scenes or epic confrontations to be tricky. I want them to have emotional weight, of course, but I don’t want them to be exhausting to read or seem too staged. But this time the most difficult scene to write was The Pudding Plunge scene and not for the usual reasons. Okay, so Tally and Penny dream up this unique fund raiser for the ARK animal shelter. Using a polar plunge as an inspiration, they decide that instead of jumping in icy water, they should have people jump into a pool filled with chocolate pudding. Weird, but not terribly tricky. And then I started writing it and I realized I wanted Penny to jump in the pudding. And my claustrophobia started twitching. By the time she’s fully submerged in pudding and feeling it smooshing up her nose and into her ears and filling her mouth, I realize I’m holding my breath. Just writing about writing it is making me twitchy. Someone who recently read Frosted told me she had a similar reaction when she read it, so I guess it worked out well in the end. (I’m not sure I’ll ever be able to look at chocolate pudding the same way.)

My writing ritual is embarrassing. Pretty much it looks like this: do everything possible to avoid actually sitting in front of my computer (Because what if I can’t write anything? Or what if it stinks? Or what if all of my stories are boring?). So, I clean the cat box, water plants, take the dog for a walk, get a bowl of cereal, go see if we’ve gotten any mail, fold laundry, and then finally I force myself to sit at the computer. And I write and write and write. And at some point my son mentions casually that he might be up for some dinner or something and I look up and realize the day is all but gone. Usually after a few days of this nonsense, I can just sit down and work like a normal person, but it takes a lot of drama on my part to get there. Former Manhattan girl Penny has quickly discovered that life in a small town is never dull. Not when there's a festival for every occasion, a Queen Bee to deal with, an animal shelter to save, and a cute boy to crush on.

There's a new girl in town: Esmeralda. She's beautiful, French, and just happens to be Queen Bee Charity's best friend. Penny hopes the arrival of Esmeralda means Charity might be too busy to keep making her life miserable.

But Penny doesn't have a lot of time to worry about Charity. Her best friend, Tally, has recruited her to help raise money to save the local animal shelter. Then there's Marcus, the adorable and mysterious boy who Penny thinks maybe likes her as much as she likes him. Plus, this is Penny's first holiday season as a "divorced" kid--although she has no idea what this means. Can Penny help her friends save the shelter, navigate her new family dynamics, and get the boy, or will Charity and Esmeralda find a way to ruin everything? 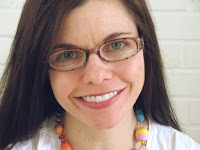 I was born in Kalamazoo, Michigan, which I think is one of the cooler places to be born, because initially people think I’m being funny—like I’m saying I was born on the moon, but then they see I’m actually being serious. It feels like since then I’ve lived nearly everywhere (well, only in the US—which is a bummer because I want to travel so much). In high school, I was in band and honors society and science club and worked on the school newspaper. All this in Texas where football was king and cheerleaders were the school royalty. When people ask me what I remember about middle school and high school, I stand there for several seconds not saying anything. This isn’t because I can’t remember anything, but because I remember too many things and I can’t figure out what to say out loud.

I spent the first part of college in Alaska, which was amazing. The first time I saw Northern Lights, I thought I was imagining it. I just couldn’t get my head around the idea that something so beautiful existed in the real world. That’s when I first started writing. This was my bad poetry phase. I think it was the combination of living there with long very cold winters and being in love with a guy that barely knew I existed that made me do it. People ask me all the time if I write poetry. I wish I could and maybe I will someday, but for now I am firmly a fiction writer. ...more

Have you had a chance to read FROSTED KISSES yet? Did reading about being submerged in pudding make you twitchy? Does it take a lot of drama for you to start writing?