We're thrilled to have Brian Falkner with us to talk about his latest novel BATTLESAURUS: RAMPAGE AT WATERLOO. 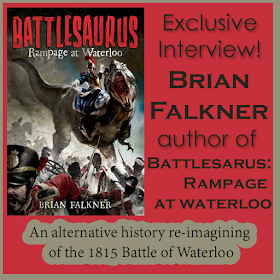 Brian, what is your favorite thing about BATTLESAURUS: RAMPAGE AT WATERLOO?

The characters. I had the opportunity with this book to write some really interesting, conflicted, vibrant characters. They often surprised, and sometimes shocked me while I was writing the book.

The hardest scene to write was the main Battle of Waterloo scene. It would have been easy to turn this into a B-Grade war movie type scene and I didn't want to do that. I didn't want pages filled with endless battle scenes, and yet I wanted the reader to have some idea of what it must have been to be on a Napoleonic battlefield. I found a way to do that, through the eyes of one of the characters, that I am really proud of.

How long did you work on BATTLESAURUS: RAMPAGE AT WATERLOO?

The initial draft took six months, and then it was about a year in editing.

What do you hope readers will take away from BATTLESAURUS: RAMPAGE AT WATERLOO?

Well for one thing I hope they learn a lot about the real life Battle of Waterloo. Except for the dinosaurs, everything else in the story is painstakingly researched and represents a fairly accurate picture of the events leading up to the battle, and the battle itself.

There were many AHA! Moments in writing Battlesaurus. Most of them came when I was researching the story and various real life events and facts suddenly slotted neatly into the world I was trying to create. Some true life facts fitted so perfectly into my fictional world that they couldn't have been better if I had made them up.

I am currently editing the sequel to Battlesaurus: Rampage at Waterloo, which is called Battlesaurus: Invasion England. It is shaping up really well. Did you know that beasts called "saurs" were a part of everyday life in 1815 Europe? Did you know that Napoleon won the battle of Waterloo? Did you know that he did so by using a terrible secret weapon against the British and Prussians? Did you know that only one boy--the son of a magician--knows how to foil the would-be Emperor's plans at world-domination? It's all true. At least according to this head-spinning historical fantasy by adventure author Brian Falkner, just in time for the bicentennial of the battle that re-shaped Europe.

Brian Falkner was born and raised in Auckland. He is the award-winning, best-selling author of several novels for children and young adults, including, The Flea Thing, The Real Thing, and The Super Freak. His action adventure sci-fi novels, The Tomorrow Code and Brainjack were both short-listed for the New Zealand Post Book Awards for Children & Young Adults and the Esther Glen Award at the LIANZA Awards, with Brainjack winning the New Zealand Post Book Awards, Children's Choice Award (Young Adult Fiction category). Brainjack also won the 2010 Sir Julius Vogel Award, Best Young Adult Novel. Both these novels have also been published in the USA and Germany.

Have you had a chance to read BATTLESAURUS: RAMPAGE AT WATERLOO yet? Do you ever find facts during research that perfectly fit your fictional world? How awesome is the image of dinosaurs included in the Battle of Waterloo?