Ann Jacobus, author of ROMANCING THE DARK IN THE CITY OF LIGHT, on making sense of the world from stories

We're excited to have Ann Jacobus here to tell us more about her debut novel ROMANCING THE DARK IN THE CITY OF LIGHT. 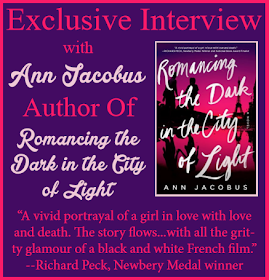 Ann, what was your inspiration for writing ROMANCING THE DARK IN THE CITY OF LIGHT?

My family and I lived in Paris for many years. One day, my young daughter and I were in the Métro, where someone either fell, was pushed, or jumped in front of our train. I got my daughter out of there in a hurry. I never did find out for sure what happened, despite trying, and eventually had to assume it was a suicide. I've wondered many times since then who it was and what had been going on in their lives that led up to that moment. My “what if” story began there.

I’ve been interested in suicide since I was fifteen when I had a run-in with suicidality (the term for feeling suicidal) that lasted a couple of months. I struggled with depression as well. I spoke of it to no one. Since then I've been drawn to, and interested in the subject and have worked on several suicide crisis lines. I saw that so many others needed help with similar overwhelming feelings and that few people wanted to even discuss this problem, much less do something about it. The stigma surrounding suicide is thick and um, pretty bullet-proof. It's up to all of us to talk about it and change that.

I wanted to write a compelling story about a main character who is thinking about ending her life, versus about someone who is affected by another person’s suicide. I wanted to explore responsibly how it's possible for suicide to appeal to someone in great pain, and what might lead a person to that state. As well as the fact that sometimes a person who is suffering the kind of mental anguish that leads to suicidality can be difficult—angry, moody, exasperating, often under the influence of mind-numbing substances. Finally, that while we are creatures of free will and it is still a choice, there can be so many things working against someone--mental health issues especially. With help and support so often lacking because of the aforementioned stigma, a suicidal person can believe they have no choice.

This story is fiction—a thriller, but it’s based on hard facts. We readers and writers make sense of the world from stories, perhaps even including better understanding and empathizing with someone who is struggling with depression and suicidality. And what does make life worth living? (hint: it rhymes with "glove.")

Honest explorations of characters with mental health issues and specifically, suicidality include Ned Vizzini’s wonderful IT’S KIND OF A FUNNY STORY, MY HEART AND OTHER BLACK HOLES by Jasmine Warga, Jennifer Niven’s ALL THE BRIGHT PLACES, also books by Julie Ann Peters and Ellen Hopkins, not to mention Laurie Halse Anderson (and I could go on). Of course, THE BELL JAR by Sylvia Plath is a classic. These authors never flinch away from the hard stuff and I would love to have had access to them all when I was a young adult.

How long did you work on ROMANCING THE DARK IN THE CITY OF LIGHT? / How long or hard was your road to publication? How many books did you write before this one, and how many never got published?

I started RTDCOL in late 2006 during my last graduate term at Vermont College of Fine Arts and worked on it over seven years before selling it. Conservatively, it probably went through at least 25 drafts. I’ve had dozens of writers and a couple of editors read it, French and Arab readers, doctors, psychologists, even a French policeman. It’s also the fifth novel I’ve written, but only the first I’ve sold. Kat Brzozowski at Thomas Dunne Books/St. Martin's Press helped whip it into its final thrilling incarnation. Haunting and beautifully written, with a sharp and distinctive voice that could belong only to this character, Romancing the Dark in the City of Light is an unforgettable young adult novel.

Summer Barnes just moved to Paris to repeat her senior year of high school. After being kicked out of four boarding schools, she has to get on the right track or she risks losing her hefty inheritance. Summer is convinced that meeting the right guy will solve everything. She meets two. Moony, a classmate, is recovering against all odds from a serious car accident, and he encourages Summer to embrace life despite how hard it can be to make it through even one day. But when Summer meets Kurt, a hot, mysterious older man who she just can't shake, he leads her through the creepy underbelly of the city-and way out of her depth.

When Summer's behavior manages to alienate everyone, even Moony, she's forced to decide if a life so difficult is worth living. With an ending that'll surprise even the most seasoned reader, Romancing the Dark in the City of Light is an unputdownable and utterly compelling novel.

Ann Jacobus writes children’s and YA fiction, blogs and tweets about it, and teaches writing. She has a B.S. from Dartmouth College and an MFA from Vermont College of Fine Arts. In her spare time she volunteers on a suicide crisis line, attends her kids' soccer games, and reads. Her debut YA thriller is Romancing the Dark in the City of Light, out from Thomas Dunne Books/St. Martin’s Press October 6. 2015. San Francisco is home to her and her family.

Have you had a chance to read ROMANCING THE DARK IN THE CITY OF LIGHT yet? Does reading and/or writing help you make sense of the world?