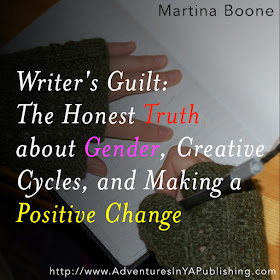 I actually get paid to write. That's still amazing to me. Someone gives me money to use my imagination, which makes me one of the most privileged people on the planet.

I write, edit, or research for at least eight hours a day at least five days a week. That is my job. That's how I look at it. But you know what? I STILL feel like my writing time is illicit, somehow stolen from other things.

I know I have to find a way to get myself past that mental block, but in talking to some other authors, I've discovered that a lot of us feel the same. Like we have to squeeze the writing time in between family and the business side of being an author, the marketing, social media, and just about anything else.

You know who overwhelmingly don't feel writer's guilt? The male authors with whom I've spoken.

I've been thinking a lot about gender roles as I finish out the Heirs of Watson Island series. Persuasion deals with the fine line between compulsion and persuasion, the many different ways in which individuals and society in general apply pressure to make someone conform.

Thinking about guilt and gender got me curious, so I looked up some studies. Admittedly, I didn't spend a lot of time chasing down the statistics, but what I saw suggests that women as a whole seem to:

You know what else women tend to do more often and also differently from men? Dream. Our dreams are a complex mixture of hope, despair, escape, and a search for validation. The success of books like Twilight and and 50 Shades and so forth speak to this a little bit. We live vicariously.

I'm a fan of Shonda Rhimes, and her commencement address at Dartmouth was brilliant. Here's an excerpt:

The dreamers — they stare at the sky and they make plans and they hope and they talk about it endlessly… The buttoned-up ones meet for cocktails and they brag about their dreams, and the hippie ones have vision boards and they meditate about their dreams. Maybe you write in journals about your dreams or discuss it endlessly with your best friend or your girlfriend or your mother. And it feels really good. You’re talking about it, and you’re planning it. Kind of. You are blue-skying your life. And that is what everyone says you should be doing. Right? I mean, that’s what Oprah and Bill Gates did to get successful, right?

Dreams are lovely. But they are just dreams — fleeting, ephemeral, pretty. But dreams do not come true just because you dream them — it’s hard work that makes things happen. It’s hard work that creates change. So… ditch the dream and be a doer, not a dreamer.

Maybe you know exactly what it is you dream of being, or maybe you’re paralyzed because you have no idea what your passion is. The truth is, it doesn’t matter. You don’t have to know. You just have to keep moving forward. You just have to keep doing something, seizing the next opportunity, staying open to trying something new. It doesn’t have to fit your vision of the perfect job or the perfect life. Perfect is boring and dreams are not real. Just do.

So you think, “I wish I could travel.” Great. Sell your crappy car, buy a ticket to Bangkok, and go. Right now. I’m serious. You want to be a writer? A writer is someone who writes every day — so start writing. You don’t have a job? Get one. Any job. Don’t sit at home waiting for the magical opportunity… Do something until you can do something else.

For me, the thing about being creative for a living is that I still feel like I'm dreaming. I'm going through the steps of doing the work--I'm actually doing the work. But I'm letting guilt hold me back.

The creative cycle is partially to blame. Even when I put in my eight-hours, for me the creative process does involve a lot of navel-gazing where I have to give my sub-conscious time to make connections. It's those times when I'm "brewing" a story that make me feel the most like I'm not actually working.

I'm going to try an experiment.
That last one, man, that's the sinker. Because somehow, even saying that one aloud induces guilt.

Have you found a way to cope?

Martina Boone spoke several languages before she learned English after moving to the U.S. She has never fallen out of love with words, fairy tale settings, or characters who have to find themselves. She is the author of Compulsion, the acclaimed first book in the Heirs of Watson Island trilogy. with Persuasion releasing 10/27/15. She is also the founder of AdventuresInYAPublishing.com, a Writer’s Digest 101 Best Websites for Writers site, the CompulsionForReading.com book drive campaign for underfunded schools and libraries, and YASeriesInsiders.com, a site devoted to the discovery and celebration of young adult literature and encouraging literacy through YA series. Locally in her home state, she is on the board of the Literacy Council of Northern Virginia, helping to promote literacy and adult education initiatives.