Stephanie Diaz, author of EVOLUTION, on evolving from a dystopian story into a space opera

EVOLUTION is the final book in the Extraction series, and we're pleased to have Stephanie Diaz here to tell us more about it. 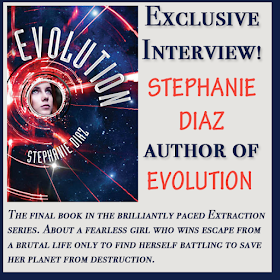 Stephanie, what was your inspiration for writing EVOLUTION?

When I began writing the Extraction series, my goal was to create a premise and world that would evolve from a dystopian story into more of a space opera by the end. EVOLUTION hits that mark with the appearance of alien forces that bring war to the people of the planet Kiel and force Clementine and her friends to fight harder for their survival than ever before. I loved getting to bring more elements of sci-fi series I love--like Star Wars and Battlestar Galactica--into the game.

How long did you work on EVOLUTION?

Since I finished the Extraction series, I've been working on a couple new projects I'm really excited about. At present the main focus is a YA fantasy standalone. I can't say much about it, but it's basically Pirates of the Caribbean meets Game of Thrones.

The final book in the brilliantly paced Extraction series. About a fearless girl who wins escape from a brutal life only to find herself battling to save her planet from destruction.

Clementine and Logan’s world is on the brink of destruction. An army of aliens from the distant planet Marden has arrived with a massive fleet of battleships, intent on finally putting an end to an age-old war. With the Alliance headquarters reduced to rubble and one of the rebel leaders close to death, Clementine and her friends have no choice but to retreat to the Core to escape the alien ships attacking the Surface.

But safety in the Core means forming a temporary alliance with their sworn enemy. Though he's a ruthless man they cannot trust, striking a bargain with him—his pardon in exchange for their help defeating the Mardenites—seems the only way the rebels might survive. The only way that Clementine and Logan might finally live in peace. But their hope for peace is short lived as they soon find out that Marden's force is more powerful than anyone anticipated, with weapons and technologies never before seen on Kiel. Unless old feuds can be set aside long enough for a diplomatic solution to be found, all of Kiel's people will be destroyed, and all of Clementine’s sacrifices will mean nothing.

With pulse-pounding twists and turns, the stunning conclusion to the Extraction series will leave you breathless!

Have you had a chance to read EVOLUTION yet? What about the other books in the Extraction series? How awesome does a Pirates of the Caribbean meets Game of Thrones book sound?