Shalanda Stanley, author of DROWNING IS INEVITABLE, on taking the preciousness out of writing

We're delighted to have Shalanda Stanley stop by to chat about her debut DROWNING IS INEVITABLE. 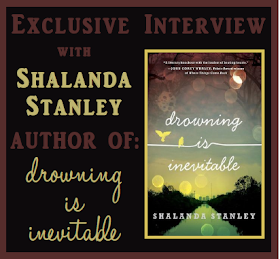 Shalanda, what was your inspiration for writing DROWNING IS INEVITABLE?

I was visiting St. Francisville and touring one of their graveyards, because that’s a thing normal people do, when I came upon a tombstone of a young girl who died on her eighteenth birthday. I thought the odds of that being coincidental were pretty low, and that spawned the idea of how Olivia’s mom dies. On that same trip, I found a magnificent live oak tree, more than a century and half old, that I fell in love with on sight. I knew that tree had seen some amazing things and would have a few stories to tell. The branches on these trees are so huge and heavy that some of them lay on the ground. If you’ve never seen one, they’re worth a Google search. They are perfect climbing trees and the ideal hiding spot for Olivia when she needs somewhere to watch life from instead of live it. The tree has a pretty special place in Olivia’s heart and the story as a whole. And finally, I often hear people say that they’d do anything for the friends in their lives, but they don’t really mean anything. I thought it would be interesting to write about two people who really mean it. Olivia and Jamie would go any distance for the other.

There was a scene that was incredibly hard to write because of the emotional impact it would have on the characters (and me). I can’t give it away because it’d be too spoiler-y, but the teens are hiding out in New Orleans and running out of options. I’d kind of written myself into a corner at this point in the book and was really worried about how it would all work out. I was standing in line at a local pizza place when I realized what had to happen in the story to get the teens back home and I started crying, thereby alarming everyone around me. I tend to be maternal with my characters and sometimes I want to take care of them instead of letting them do things their way. That’s the hardest part of writing for me, getting out of the characters’ way and letting them do what they need to do, even if it’s not what is best for them.

What’s your writing ritual like? Do you listen to music? Work at home or at a coffee shop or at the library, etc.?

I write anywhere and everywhere and I always listen to music. I write part-time, work full-time, and have a family, so I take my writing time whenever I can get it, early, late, you name it. I used to think that I had to have everything just so to write, the perfect writing space, the perfect time of day, the perfect mood, lighting. I quickly learned that I had to take the preciousness out of writing; otherwise, I’d never get anything done. These days you can find me writing in my car while waiting for my son to finish football practice.

What do you hope readers will take away from DROWNING IS INEVITABLE?

It’s my hope that even though the book deals with heavy topics, readers are left feeling optimistic about Olivia and her future. It’s also my hope that readers will be left with a burning desire to call their best friends and tell them they love them.

I’m working on a teenage Bonnie and Clyde story, tentatively titled IT DIDN’T HAVE TO END THIS WAY. I’ve had so much fun doing the research for this book. Bonnie and Clyde were killed outside of Arcadia, Louisiana, about an hour from where I live. The whole place is practically a memorial to the two of them. I remember when I was younger, I visited the town during one of their “Bonnie and Clyde Trade Days.” It’s a festival hosted by the town, and that particular time, the festival was being loaned the death car, the actual car the two were gunned down in. People came from everywhere to see it. I didn’t know how to expect to feel when I saw it, but I figured I’d be grossed out or scared, but the emotion I felt most was sadness. I thought their story was so tragic and could’ve gone so many different ways. I’ve always been intrigued with the idea of writing a YA version inspired by their story and am really excited to finally be doing it. Olivia has spent her whole life struggling to escape her dead mother’s shadow. But when her father can’t even look at her because Olivia reminds him of her mother, and her grandmother mistakenly calls her “Lillian,” shaking a reputation she didn’t ask for is next to impossible. Olivia is used to leaning on her best friend, Jamie; her handsome but hot-tempered boyfriend, Max; and their wild-child friend, Maggie, for the reality check that her small Louisiana town can’t provide. But when a terrible fight between Jamie and his father turns deadly, all Olivia can think to do is grab her friends and run.

In a flash, Olivia, Jamie, Max, and Maggie become fugitives on the back roads of Louisiana. They’re headed to New Orleans, where they hope to find a solution to an unfixable problem. But with their faces displayed on all the news stations, their journey becomes a harrowing game of hide-and-seek from the police—and so-called allies, who just might be the real enemy.

Shalanda Stanley’s breathtaking debut novel explores the deep ties between legacy, loyalty, and love, even as it asks the question: How far would you go to save a friend?

She is represented by literary agent, Kate Mckean at the Howard Morhaim Literary Agency.


Have you had a chance to read DROWNING IS INEVITABLE yet? Have you ever alarmed people around you while thinking about your characters? Are you able to write anywhere like Shalanda?