Our Red Light, Green Light contest has come to its very end... which means it's time to announce our top three. We had some amazing entries in this contest, and we wish each and every one of our contestants the best in their future writing! At the end of the day, however, you - our amazing community - and the judges have spoken. 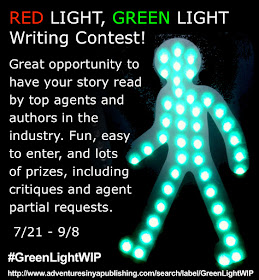 The Pitch
When nineteen-year-old Wyatt Emerson overhears a plot involving her boyfriend to bomb Parliament in London, she must discover the details and stop the bombing before it’s too late.

The Beginning
“We should slit her throat straight away. Why wait?”
“Shut up, Heman! If I'm to die soon, I want to enjoy the time I’ve got left.”
“OK, Vineet. But if she finds out anything, she dies.”
I open my eyes. God, my head hurts! I face a wall. I don’t move. Where am I? Not The Three Tuns…
“Raj, are you sure you can assemble this bomb in under a day?”
“Yes, Heman, absolutely sure. I’ve got the steps memorized, and I’ve practiced with similar materials.”
“Excellent. We won’t receive the materials from the Emir until that morning."

THE DEMON HUNTER'S INHERITANCE
by Christine Rogers YA Fantasy

The Pitch
Sixteen-year-old Matt, his cousin Sarah, and their friend Jake investigate the death of Matt’s cousin Eric. But when they learn that Eric hunted demons, it gets slightly more complicated…and lethal.

The Beginning
Matt's birthday was Eric's deathday, and that was how it all started.Matt should have realized that something was wrong sooner; his cousins were normally annoyingly punctual to any sort of party. Usually, Sarah would complain about how Mountain Dew looked radioactive and Eric would chug some cans of soda to annoy her, but Matt’s birthday party was in full swing, and they were nowhere to be seen. This was fine with Matt, though, because he had something far more important to think about.
Natalie Evans was a fellow sophomore and possibly the most beautiful girl to ever understand football.


FIREBIRD
by Laura Pohl
YA Fantasy
The PitchIn a retelling of “Ivan and the Firebird,” the daughter of Koschei must choose whether to save her kingdom or get revenge on the man who betrayed her.

The BeginningIn a tall white tower covered by snow, in a tall white castle that sat atop a tall white mountain Koschei the Immortal grew restless with loneliness. He'd survived thousands of years without company, and he'd survive thousands more, but with the winter growing cold and his castle empty, the blackness in his heart longed for another to share with the harsh winters of Russia.
His brothers and sisters suggested it was time for Koschei to find a bride - and one night, he stole away the beautiful Mariya Morevna and took her to his castle.
Lindsey Hodder at 5:38 PM