Meg Wiviott, author of PAPER HEARTS, on being inspired by true events

PAPER HEARTS is a novel in verse by Meg Wiviott, and we're pleased she could join us to share more about it. 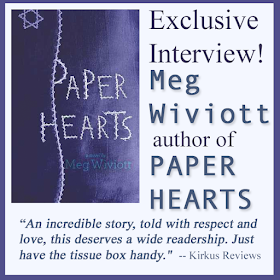 Meg, what was your inspiration for writing PAPER HEARTS?

This story is based on true events, so after seeing the Heart on display at the Montreal Holocaust Memorial Centre, and then watching the film documentary “The Heart of Auschwitz” (Ad Hoc Films, 2010), I knew Fania and Zlatka’s story needed to be told.

Having to “go” to Auschwitz every day was difficult, but the scene that was probably the hardest was the one which occurs in the poem “Selection” when Zlatka arrives at Auschwitz with her mother and younger brother and sister. I won’t tell what happens, but I think the title explains enough to understand why it was hard to write. It is the one poem that can still make my eyes fill.

I am proud of the entire book, but my most favorite scene/poem is “74207” which is the number tattooed on Fania’s arm. The poem came to me while my husband and I were hiking. The black marks on the white bark of birch trees reminded me of scars and I started thinking of other black and white scars. It’s my favorite because I didn’t understand the power of the imagery until well after the poem was written and a friend pointed it out to me. THAT is the magic of writing.

I write at home, in my office, in the morning, with a very large cup of coffee near by. Sometimes, depending on what I’m writing, I’ll listen to music that fits whatever it is I’m working on. For PAPER HEARTS I wrote in silence.

I am currently working on an YA historical novel set in 15th century London.

Amid the brutality of Auschwitz during the Holocaust, a forbidden gift helps two teenage girls find hope, friendship, and the will to live in this novel in verse that’s based on a true story.

An act of defiance.
A statement of hope.
A crime punishable by death.

Making a birthday card in Auschwitz was all of those things. But that is what Zlatka did, in 1944, for her best friend, Fania. She stole and bartered for paper and scissors, secretly creating an origami heart. Then she passed it to every girl at the work tables to sign with their hopes and wishes for happiness, for love, and most of all—for freedom.

Fania knew what that heart meant, for herself and all the other girls. And she kept it hidden, through the bitter days in the camp and through the death marches. She kept it always.

This novel is based on the true story of Fania and Zlatka, the story of the bond that helped them both to hope for the best in the face of the worst.

Meg Wiviott attended the University of Wisconsin-Madison where she majored in history, and earned a Master's degree in Education from Northwestern University. She holds an MFA in Writing for Children & Young Adults from Vermont College of Fine Arts. Meg and her husband have two grown children and live in New Jersey. She is the author of the picture book BENNO AND THE NIGHT OF BROKEN GLASS (Kar-Ben 2010) and PAPER HEARTS, a YA novel-in-verse based on a true story of friendship and survival in Auschwitz, which will be published October 13, 2015 by Margaret K. McElderry Books (Simon & Schuster).


Have you had a chance to read PAPER HEARTS yet? Were you already familiar with the Heart of Auschwitz? How many tissues do you think you'll need to make it through the book?