Marci Lyn Curtis, author of THE ONE THING, on her formal and stuffy writing ritual

We are pleased to have Marci Lyn Curtis here to tell us more about her debut novel THE ONE THING. 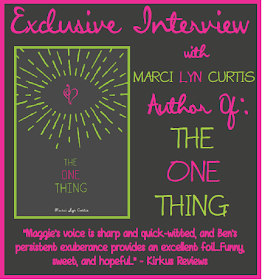 Marci, what book or books would most resonate with readers who love your book--or visa versa?

I was shocked and flattered to see that Kirkus recently listed The Fault in Our Stars as a similar title. I have such deep respect for John Green that I get sort of blinky-eyed just being mentioned in the same sentence as him. Aside from that, readers who enjoyed Sea of Tranquility might also like The One Thing, because both stories have stubborn, flawed heroines struggling with loss.

I toyed around with my first story 6 or 7 years ago. It was horrible—wow, it was horrible—so I ended up completely annoyed, cramming the manuscript into the back of the closet and stomping off. Naturally it was then, when the last thing I wanted to do was write, that the storyline for The One Thing came to me. So I did what every red-blooded, self-respecting, stubborn writer would do: I tried to ignore it.

The story picked at me for a good year-plus before—if only to get it out of my head—I started making notes. Within six months or so, those notes grew to a giant stack of papers that were the building blocks of The One Thing. Once I was finally ready to sit down and write, The One Thing just rolled right out of me. After I had a finished draft, everything else moved quickly. I found an agent within a couple months. We did a few rounds of revisions, and then she submitted it to a handful of publishing houses. Within six weeks, the story sold.

Ah. Well. It’s all rather formal and stuffy:

1. Get up at 4:30 A.M. to let out dog.
2. Swear creatively at said dog for pooping on the concrete instead of the grass.
3. Dream up interesting-and-or-funny story dialogue while exercising and showering.
4. Scrawl dialogue on scraps of paper or receipts or the backs of envelopes.
5. Slog around on social media.
6. Ensure absolute, unwavering quiet.
7. Squint at notes.
8. Grumble at notes.
9. Thumb nose at notes.
10. Toss some words at laptop and pray they stick. Maggie Sanders might be blind, but she won't invite anyone to her pity party. Ever since losing her sight six months ago, Maggie's rebellious streak has taken on a life of its own, culminating with an elaborate school prank. Maggie called it genius. The judge called it illegal.

Now Maggie has a probation officer. But she isn't interested in rehabilitation, not when she's still mourning the loss of her professional-soccer dreams, and furious at her so-called friends, who lost interest in her as soon as she could no longer lead the team to victory.

Then Maggie's whole world is turned upside down. Somehow, incredibly, she can see again. But only one person: Ben, a precocious ten-year-old unlike anyone she's ever met. Ben's life isn't easy, but he doesn't see limits, only possibilities. After awhile, Maggie starts to realize that losing her sight doesn't have to mean losing everything she dreamed of. Even if what she's currently dreaming of is Mason Milton, the magnetic lead singer of Maggie's new favorite band, who just happens to be Ben's brother.

But when she learns the real reason she can see Ben, Maggie must find the courage to face a once-unimaginable future ... before she loses everything she has grown to love.

Marci Lyn Curtis grew up in Northern California, where she went to college and met an amazing guy in a military uniform. Two college-aged kids and one dachshund later, she lives in Maryland, where she laughs too loudly and eats peanut butter off spoons. Her YA contemporary debut, The One Thing, comes out September 8th, 2015 via Disney-Hyperion.

Say hi to her on her at marcilyncurtis.com.

Have you had a chance to read THE ONE THING yet? Do your story ideas pick at you until you finally do something about them? What do you think about Marci's formal and stuffy writing ritual?