Mackenzi Lee, author of THIS MONSTROUS THING, on learning to appreciate your own journey

We're thrilled to have Mackenzi Lee join us to share more about her debut novel THIS MONSTROUS THING. 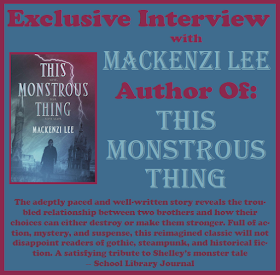 Mackenzi, what was your inspiration for writing THIS MONSTROUS THING?

My books never have a single “aha!” inception moment. Instead, a bunch of small things I’ve collected over the years all synthesize into one. The idea for This Monstrous Thing was a combination of seeing a production of Frankenstein at the National Theater that changed my perspective on the story, hearing Frankenstein misidentified as the first steampunk novel (which I knew was wrong, but it sounded like a good idea), a trip I took to Germany at Christmastime, and a lifetime of being the emotional older half of a pair of siblings. It all culminated in an email to my sister, the first line of which was ‘I think I just came up with an idea that’s too weird to write.’ Thankfully, she didn’t think so and told me to write it.

There’s a flashback in the book to Alasdair and Oliver (the two brothers in the book) taking an inadvertent ice skating adventure in Amsterdam that I love very much. It’s my favorite scene in the book for a couple of reasons—first because it was a breakthrough moment for me in developing their relationship. The first draft of the novel was woefully absent of scenes with them together and getting along! Writing this scene was a sweet moment between two people who mostly have pain and strife between them during the present narrative of the novel. But the reason it has the most special place in my heart is because it’s the only scene in the book that’s sort of inspired by truth. The idea came to me when my sister and I were in Salem, Massachusetts in the winter and had to skate our way through a frozen cemetery, holding each other up.

Well obvs if you like This Monstrous Thing, you gotta read Frankenstein. It’s even better. And if you’re a fan of alternate history steampunk without magic, I can’t recommend the Leviathan series by Scott Westerfeld highly enough!

How long did you work on THIS MONSTROUS THING?

I alternate between writing in my hot, but adorable apartment and the Writer’s Room of Boston, which is a quiet, air-conditioned (can you tell it’s summer while I’m writing this?) space looking out across historic downtown and some of the most beautiful stonework and fire escapes you’ll ever see. Being in that space with other writers being studious and creative always inspires me to be similarly studious and creative. I make playlists for every book I write, and I listen to them while I work—most of the playlist for This Monstrous Thing was dominated by an album called The Life of the World to Come by the Mountain Goats, which has a lot of life and death and resurrection imagery. I also make Pinterests boards, and when I get stuck, the visual inspiration helps stimulate a different part of my brain. And I always, always, always have to have Diet Coke. That’s really my only non-negotiable demand.

Don’t compare yourself to others—it is literally the hardest thing about being a writer, and it never goes away. It’s a lesson I have to relearn every time I get on Twitter. Wherever you are in your journey, it will never feel like you’re far enough. It will always feel like someone has more than you or is getting something you want. So you have to learn to appreciate your own journey, your own timetable, your own successes, and your own speed. Enjoy where you are in your publication journey, whether you are unagented, prepublication, just starting out, or ten books in—there is something awesome in every step of the way. So don’t miss out on it by looking at where other people are!

I have another book coming out with Katherine Tegen/HarperCollins—it’s unrelated to This Monstrous Thing and has no Frankenstein in it (alas the day!), but it’s another historical fantasy set in eighteenth-century Europe, and there are boys and queerness and road tripping and magical things. His chance to break free of Geneva—lost.

Heart-broken and desperate, Alasdair does the unthinkable: He brings Oliver back from the dead.

But putting back together a broken life is more difficult than mending bones and adding clockwork pieces. Oliver returns more monster than man, and Alasdair’s horror further damages the already troubled relationship.

Then comes the publication of Frankenstein and the city intensifies its search for Shadow Boys, aiming to discover the real life doctor and his monster. Alasdair finds refuge with his idol, the brilliant Dr. Geisler, who may offer him a way to escape the dangerous present and his guilt-ridden past, but at a horrible price only Oliver can pay…

Mackenzi Lee is reader, writer, bookseller, unapologetic fangirl, fast talker, and perpetually-anxious badass. She holds an MFA from Simmons College in writing for children and young adults, and her short fiction has appeared in Inaccurate Realities, The Friend, and The Newport Review. Her young adult historical fantasy novel, THIS MONSTROUS THING, which won the PEN-New England Susan P. Bloom Children’s Book Discovery Award, as well as an Emerging Artist Grant from the St. Botolph Club Foundation, will be published fall of 2015 by Katherine Tegen/HarperCollins.

She loves Diet Coke, sweater weather, and historical fiction. On a perfect day, she can be found enjoying all three. She currently calls Boston home.


Have you had a chance to read THIS MONSTROUS THING yet? Do you have one thing you always, always have to have when you write? Are you able to enjoy your own publishing journey without comparing yourself to others?