Leila Sales, author of TONIGHT THE STREETS ARE OURS, on not feeling jealous or inferior

We are thrilled to have Leila Sales join us to share more about her latest novel TONIGHT THE STREETS ARE OURS. 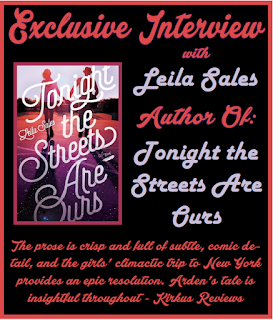 Leila, what do you hope readers will take away from TONIGHT THE STREETS ARE OURS?

That just because someone's life seems perfect online, that doesn't mean it actually is, and you shouldn't feel jealous or inferior for your real life not measuring up to the instagram version of somebody else's.

My first-ever middle grade book is coming out early next year. It's called ONCE WAS A TIME, and it's a time-travel story about two best friends who are separated by time and space. Next I'm working on my next YA, but it's still very early days, so I can't say anything about that one yet.


Leila is having a huge virtual celebration tonight, and she's inviting everyone to participate! Click this link to find out the details and join the party because #TonightTheStreetsAreOurs! Tonight the Streets Are Ours by Leila Sales
Hardcover
Farrar, Straus and Giroux
Released 9/15/2015

Recklessly loyal. That's how seventeen-year-old Arden Huntley has always thought of herself. Taking care of her loved ones is what gives Arden purpose in her life and makes her feel like she matters. But lately she's grown resentful of everyone--including her needy best friend and her absent mom--taking her loyalty for granted.

Then Arden stumbles upon a website called Tonight the Streets Are Ours, the musings of a young New York City writer named Peter, who gives voice to feelings that Arden has never known how to express. He seems to get her in a way that no one else does, and he hasn't even met her. Until Arden sets out on a road trip to find him.

Leila Sales was born in 1984 and grew up outside of Boston, Massachusetts. She graduated from the University of Chicago with a degree in psychology in 2006. Now she lives in Brooklyn, New York, and works in the mostly glamorous world of children's book publishing. Leila spends most of her time thinking about sleeping, kittens, dance parties, and stories that she wants to write.

Have you had a chance to read TONIGHT THE STREETS ARE OURS yet? Do you compare your life to the seemingly perfect online lives of other people? What's the most times you've completely rewritten a section of your novel?