Katie Coyle, author of VIVIAN APPLE NEEDS A MIRACLE, on the difficulties of writing a sequel

VIVIAN APPLE NEEDS A MIRACLE is the sequel to VIVIAN APPLE AT THE END OF THE WORLD, and we're happy to have Katie Coyle here to tell us more about it. 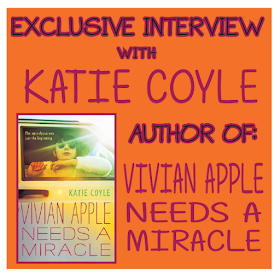 Katie, what did this book teach you about writing or about yourself?

I learned that writing a sequel is hard! When I wrote the first book, I thought of it as a story that could and hopefully would continue, and purposefully left in some loose ends. But I didn’t anticipate the trouble I’d have getting back into Vivian’s head after some time away. About six months passed between my final edits on Vivian Apple at the End of the World and my first stabs at Vivian Apple Needs a Miracle, and it was difficult, at first, to find my way back into that world—both because I’d been working on other projects in between, and because it’s a pretty dark world. What helped was the fact that the sequel moves at a faster clip than the first book, with several big action sequences that were a blast to write. And though my first attempts were a little messy, I was eventually able to hear Vivian’s voice in my head again, at which point things progressed pretty smoothly.

What do you hope readers will take away from VIVIAN APPLE NEEDS A MIRACLE?

For me, the first book is about realizing your own capacity for strength and bravery, and the second book is about finding a way to apply that strength and bravery to make the world around you a better place. Vivian struggles a lot throughout the sequel to find a form of social action that feels true and right to her—even when the consequences of these actions are not quite what she anticipated. I hope that readers connect to that struggle, and that some of them feel challenged to try and make a difference in their own communities in whatever way works best for them.

It’s so important to figure out early the difference between criticism from readers who understand your voice and your vision, and criticism from people who were never going to get it in the first place. The former is constructive and can help you become a better writer, and the latter is something you have to ignore if you want to get any work done. You’re never going to please everyone, and there is enormous freedom in realizing that, ultimately, you wouldn’t want to. I think often of this tweet from the comedian Billy Eichner: “Funny when reviews say, 'He’s not [for] everyone but we love Billy Eichner.’ I [can’t] think of anything less interesting than being ‘for everyone.’” “GET ANGRY. We should all be so pissed at the Church of America that we’re willing to break our hands in the metaphorical punching of its metaphorical face.” —Harpreet Janda, fugitive

The predicted Rapture by Pastor Frick’s Church of America has come and gone, and three thousand Believers are now missing or dead. Seventeen-year-old Vivian Apple and her best friend, Harpreet, are revolutionaries, determined to expose the Church’s diabolical power grab . . . and to locate Viv’s missing heartthrob, Peter Ivey.

This fast-paced, entertaining sequel to Vivian Apple at the End of the World challenges readers to consider how to live with integrity in a disintegrating world.

Katie Coyle grew up in Fair Haven, New Jersey, and has an MFA from the University of Pittsburgh. Her debut novel, VIVIAN APPLE AT THE END OF THE WORLD (Houghton Mifflin Harcourt 2015), was named one of the forty best YA novels of all time by Rolling Stone, and was followed by a sequel, VIVIAN APPLE NEEDS A MIRACLE. Her short fiction has won the Pushcart Prize, and has been featured or is forthcoming in BEST AMERICAN NON-REQUIRED READING, One Story, The Southeast Review, and Critical Quarterly, among others. She lives in San Francisco with her husband, and blogs at katiecoyle.com.


Have you had a chance to read VIVIAN APPLE NEEDS A MIRACLE yet? Have you written a sequel? Are you able to figure out the difference between the types of criticism?