Kat Spears, author of BREAKAWAY, on overcoming the fear of exposing a deeper part of yourself

We're excited to have Kat Spears stop by to tell us more about her latest novel BREAKAWAY. 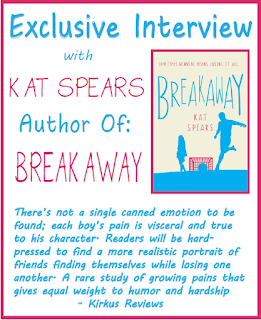 Kat, what was your inspiration for writing BREAKAWAY?

There were two main inspirations for writing BREAKAWAY. First, it is set in the area of south Arlington, Virginia where I attended high school. High school was a tumultuous time of life for me and I have many strong memories attached to the same locations where Jason and his friends spend their time. The diversity of Arlington is reflected in the cast of BREAKAWAY, diversity of race and socio-economic status. My family fell squarely in the middle-class, but Arlington at that time exhibited shocking extremes between the haves and the have-nots. I tried to do that diversity justice with the cast of BREAKAWAY, but I’m afraid an accurate depiction could never fully be captured in words.

Second, I was trying to tell a story about life transitions and their effect on friendships. In BREAKAWAY, the boys are preparing to leave high school and enter the rest of their lives. And not everyone is going in the same direction. In real life some friendships survive beyond high school while others don’t. Jason, the main character, is exploring the idea of what constitutes real friendship. In the case of the four boys in BREAKAWAY the commonality is that they are each outcasts in their own way. Mario resists his Hispanic heritage; Jason has a broken, complicated family history; Jordie does not feel at home among his wealthy, white neighbors because he is of mixed heritage; and Chick is mentally ill.

Any of the more romantic scenes between Jaz and Raine were hard for me to write. Romantic love is just a part of life, especially in high school, so I never feel like a YA story is complete if there isn’t at least some romantic aspect. But I don’t really enjoy writing romance and it is rarely a major element in books that I read for pleasure. I’d much rather read an adventure story like Treasure Island than a romance.

The romantic scenes were the hardest to write and I can’t say I do take a lot of pride in them. I am much more fond of the interactions between the platonic friends in BREAKAWAY.

How long did you work on BREAKAWAY?

I actually started writing BREAKAWAY almost ten years ago. I abandoned it when I had about 20,000 words written, though I already had the full story written in my head. When I pitched BREAKAWAY as one of three possibilities for my second published book, it never occurred to me that my agent or editor would give this book a second thought. I had included it only to offer at least three works-in-progress to my agent.

When the book was taken under contract by St. Martin’s Press, I suddenly found myself returning to write in a voice I hadn’t thought about in over five years. It was very hard to get back into the groove of writing it but I completed the next 50,000 words over a four-month period. Editing took another five or six months after that.

BREAKAWAY was an intensely personal project for me because it is set in a place so familiar and the characters are all loosely based on real people I’ve known. I feel quite naked when people read it, especially people who have known me since high school. My best friend from high school read it when it was still in draft form and I know she had a perfect mental image of every location I described. The park pavilion, the rocks in the middle of the stream, the apartment complex where Jason lives, were all places we knew intimately.

This project taught me not to shy away from making myself vulnerable through my writing. It’s one of the most difficult lessons for writers, overcoming the fear of exposing a deeper part of themselves. For every writer who tries to get a book published, there must be a thousand who would never show their writing to anyone.

Writing BREAKAWAY made me realize how much of our lives we waste worrying about other people’s expectations and opinions.

I think most professional authors would be horrified by my lack of writing time and discipline. Because of my busy life with kids and a full-time job, I rarely get more than thirty minutes to write in one sitting.

Most of my writing is done in my head when I am doing other things—driving, taking a shower, setting up the bar at work—any menial task that doesn’t require my full attention. I play the story out like a movie in my head, rewinding and redoing each scene in my mind until I have the dialogue and mental image memorized. Then, when I do sit down at my laptop, I can write out my description of the scene pretty quickly.

I have just learned to write fast and edit on the fly. By the time I finish a first draft I have also completed most of my editing. I constantly reread and tweak what I have already written and I think that helps me to maintain consistent character voice.

Right now I’m working on THE BOY WHO KILLED GRANT PARKER. I think I must have been insane to ever pitch this book idea to my editor because it is so hard to write. It’s a dark comedy like my first novel SWAY was, but with much more complexity.

For this project I am inspired by Jack London, who always claimed his novels were simple adventure stories virtually any person could enjoy. For the people who look for deeper meaning in literature, London did have underlying social metaphors, but they weren’t germane to the story.


I’ve always been much more of a shallow reader. I don’t need any deeper meaning within a good story, so writing this book is another departure for me from my comfort zone.

On the surface, GRANT PARKER is a somewhat silly story about a boy who wants to be accepted and liked at his new school. I’m exploring societal tendencies to create celebrities and heroes only so they can be torn down and publicly ridiculed. We’ll see how it goes. I’m still not entirely convinced I have the writing talent necessary to pull this one off. From Kat Spears, author of Sway, comes a new novel that asks the question: when a group of four best friends begin to drift apart, what will it take to bring them back together?

When Jason Marshall's younger sister passes away, he knows he can count on his three best friends and soccer teammates—Mario, Jordie, and Chick—to be there for him. With a grief-crippled mother and a father who's not in the picture, he needs them more than ever. But when Mario starts hanging out with a rough group of friends and Jordie finally lands the girl of his dreams, Jason is left to fend for himself while maintaining a strained relationship with troubled and quiet Chick. Then Jason meets Raine, a girl he thinks is out of his league but who sees him for everything he wants to be, and he finds himself pulled between building a healthy and stable relationship with a girl he might be falling in love with, grieving for his sister, and trying to hold onto the friendships he has always relied on.

A witty and emotionally moving tale of friendship, first love, and loss, Breakaway is Kat Spears at her finest.

Kat Spears has worked as a bartender, museum director, housekeeper, park ranger, business manager, and painter (not the artistic kind). She holds an M.A. in anthropology, which has helped to advance her bartending career. She lives in Richmond, Virginia with her husband and three freeloading kids. Sway is her debut novel.

Have you had a chance to read BREAKAWAY yet? How much of your past do you incorporate into your stories? Do you play your stories in your head like a movie before writing?