How to Write a Novel (and Actually Finish It!) in 8 Simple Steps -- Plus a DAMAGE DONE by Amanda Panitch Giveaway 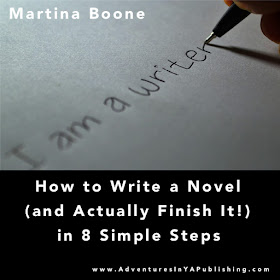 Writing a novel isn't magic. I'd like to say that anyone can write a book--and truly, almost anyone can. The trick is sticking with it, making it good, and getting it published.

Ah, there's the rub. Frequently when someone asks me "How do you write a book?" what they're really asking is "How do I get a book published?"

There are a thousand ways to answer that, but the most honest one is that once a book is at a certain level of competency, no matter how good it is, or how many books you've written or previously published, sometimes luck is what separates a book that gets a book deal from one that doesn't.

You can't control luck. But there are a number of things that will make it easier if you want to write a book that has a chance of traditional or successful indie publication. You can boil that down to eight basic steps.


Writing a novel isn't easy. It's not for everyone. And the truth is, not every novel is going to be published. You have no control over that part of the process.

What you can control is getting the novel written and making it the best that you can make it at this particular point in your life and your career. Don't hold out for perfection. Perfection doesn't exist.

Success for writing a novel is measured only by your life and your story. If you get to the point where you can type "The End," that's worthy of celebration, and whether your novel ultimately finds a home with a traditional publisher,  get's put out in the world as an indie publication, or gets put back in the drawer of your desk will not change the fact that YOU wrote a novel.

You've got this. You CAN write. Now go on, have faith and give it your best shot!

What are you working on? Tell me in the comments below! Have you started working on a book? Have you been writing for a while? Do you have a story in the back of your mind?