Hillary Monahan, author of MARY: UNLEASHED, on scaring herself while writing

We're glad Hillary Monahan could swing by to share more about her latest novel MARY: UNLEASHED. 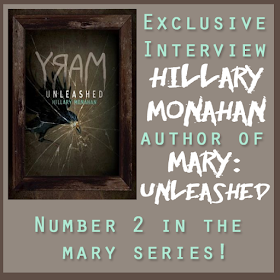 Hillary, what scene was really hard for you to write and why, and is that the one of which you are most proud? Or is there another scene you particularly love?

I can't go too far into detail without giving something away, but there is a scene toward the end of the book where Dell is in her kitchen with Mary. It's scary and gruesome and I love it because, when I was writing it, I was actually shuddering behind my desk. It takes a lot to get that reaction out of me. I've seen so many horror movies/read so many stories that to get me to jolt is a good thing.

How long did you work on MARY: UNLEASHED?

A year. I wrote it twice. My first effort was awful; my mother was in chemotherapy for breast cancer and I plowed on despite my head being elsewhere. When I finished the book, it was a choppy mess. It was so bad I wouldn't show it to beta readers, my agent, or my ever-so-patient editor, Tracey. I pulled it off the table and, when my mother's chemo ended and her prognosis improved, rewrote it into the book you see today. Each version took about six months a piece.

I work in an office with pumpkin orange walls and a lot of creepy art. To my left is the Haunted Mansion collection from Disney. Behind me is a wall of trade paperback comic books, and to my right, a shelfing system specifically chosen for its capacity to hold my enormous makeup collection. (I have a makeup problem.) I sit in this room of Stuff, put on my headset, and most times I don't listen to music unless I'm rereading/editing my work to make sure the mood is correct. Unfortunately, I tend to sing along with anything with lyrics and that's distracting. Two basset hounds keep me company while I create monsters and . . . well, anything else that pops into my head, really. Mary in the mirror. Mary in the glass. Mary in the water. Mary lurks in the emptiness, in the darkness . . . in the reflection. That is, until Jess unleashes her into the world. Now Mary Worth is out and her haunting is deadlier than ever.

No one is safe.

Shauna, Kitty, and Jess must band together to unearth the truth about Mary's death to put her soul to rest for good. Their search leads them back to where it all began--to Solomon's Folly, a place as dangerous as the ghost who died there a century and a half ago. Quick sand, hidden traps, and a phantom fog are the least of their worries. To stop Mary, they need to follow a dark string of clues and piece together a gruesome mystery that spans generations.
But time is running out.

As chilling facts come to light, Mary inches ever closer to her prey. Can Jess, Shauna, and Kitty break Mary's curse before it's too late? Or will history repeat itself until there is no one left to call her name . . . ?

At night, when the lights are dim and the creepy crawlies scuttle through the shadows, debut author Hillary Monahan throws words at a computer. A denizen of Massachusetts and an avid gamer, she’s most often found locked in a dark room killing internet zombies or corralling basset hounds. Her first novel, MARY: THE SUMMONING debuted fall of 2014 thanks to Disney-Hyperion.

Have you had a chance to read MARY: UNLEASHED yet? Have you ever written anything that made you shudder? Doesn't Hillary's office seem like the perfect setting to write scary stuff?