VENGEANCE ROAD is a western by Erin Bowman, and we're excited she stopped by to tell us more about it. 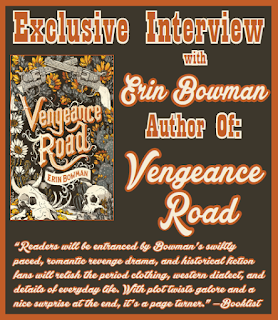 Erin, what was your inspiration for writing VENGEANCE ROAD?

Vengeance Road is inspired by the legend of the Lost Dutchman, a rich gold mine supposedly hidden in the Superstition Mountains east of Phoenix, Arizona. My husband, who has family in Arizona, was telling me the legend one night and my muse exploded! I was struck by the image of a girl looking to avenge her father's murder, but getting caught up in a bloody quest for lost gold. Her story intersects with threads of the Lost Dutchman legend (as well as historical figures associated with the tale), and I had so much fun writing it!

The opening scene of Chapter 21 was extremely hard to write. (That's as much as I can say without risking spoilers). I also love the novel's final pages--they might be my favorite of the whole book--and while it's not a scene, I'm incredibly proud of Kate's voice. Her story is written like she speaks, in a rough dialect that reflects the lawless world she lives in.

What do you hope readers will take away from VENGEANCE ROAD?

I played with a couple themes in this novel, and while a book's most important job is to tell a compelling story, I hope readers will reflect upon Vengeance Road's moral ambiguity by the final pages... The fine line between good and evil, if it's better to avenge or forgive, what makes Kate a heroine while the villains are "bad guys."

I have a bunch of works-in-progress on my laptop, but I keep coming back to two in particular: Another western (a potential companion novel for Vengeance Road, set ten years later but with a new cast) and a YA contemp (set at a summer camp in the Adirondacks that is plagued by strange, ghostly occurrences). Nothing is contracted yet, but fingers crossed that changes soon. :) When Kate Thompson’s father is killed by the notorious Rose Riders for a mysterious journal that reveals the secret location of a gold mine, the eighteen-year-old disguises herself as a boy and takes to the gritty plains looking for answers and justice. What she finds are devious strangers, dust storms, and a pair of brothers who refuse to quit riding in her shadow. But as Kate gets closer to the secrets about her family, she gets closer to the truth about herself and must decide if there's room for love in a heart so full of hate.

In the spirit of True Grit, the cutthroat days of the Wild West come to life for a new generation.

Erin grew up in rural Connecticut, where she spent most of her childhood telling stories. It is rumored that her first words were not "Mama" or "Dada," but "Once upon a time." In middle school, when kids were going off to sleep-away camp for the summer, Erin was attending writing camp and penning short stories.

She studied web design (and minored in Creative Writing because she couldn’t stay away from stories) at the Rochester Institute of Technology in upstate New York. After several years working in advertising and designing websites for various brands, she moved from Boston to New Hampshire, where she now lives with her family and writes full-time.

When not writing, Erin can often be found hiking, geeking out over good typography, and obsessing over all things Harry Potter. She drinks a lot of coffee, buys far too many books, and is not terribly skilled at writing about herself in the third person.

She is represented by Sara Crowe of Harvey Klinger, and is the author of the Taken Trilogy (available from HarperTeen) and Vengeance Road (HMH Books for Young Readers).


Have you had a chance to read VENGEANCE ROAD road yet? Are you familiar with the legend of the Lost Dutchman? What are your thoughts on morally ambiguous characters?