Donna Jo Napoli, author of DARK SHIMMER, on being bold

We're delighted to have Donna Jo Napoli join us to share more about her latest novel DARK SHIMMER. 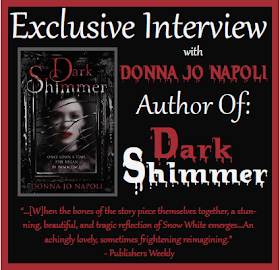 Donna Jo, what was your inspiration for writing DARK SHIMMER?

I never understood the queen in Snow White.  I don't understand fixations on bodily beauty.  But I was talking to my editor, Wendy Lamb, and she mentioned how beautiful Venice's mirrors are... and somehow I found I had met Dolce in my head. Bodily beauty was a complex issue for Dolce, and it was connected to feelings of loss.  This I had to explore.

It was very hard for me to write the scene in which the queen gives Snow White an apple and the girl just bites right in, when she's already had attempts on her life 3 times.  I didn't feel the psychological reality of it; I mean, what kind of idiot would take the bait a fourth time? And I didn't understand what poison the queen could use that would allow Snow White to appear dead and then would allow her to awaken without permanent damage.  So I looked into various neurotoxins and discovered that the red tide that hits shellfish was exactly the right kind of toxin.  But, of course, I couldn't have Dolce just happen to think of the right toxin at the right moment.  So that meant I had to go back and figure out where I could tie in that neurotoxin... and that's how I came to delve into the death of Dolce's mother.  It all finally came together.  And Biancaneve wasn't dumb at all... she didn't choose to bite the apple.  She doesn't in fact even bite it.  She merely inhales the toxin from the fumes in the air.  All of this was a huge challenge, and I'm happy with how it gelled finally.

How long did you work on DARK SHIMMER?

Actually, I talked above as though Wendy talked about mirrors and then, boom, I knew where I was going.  But, in fact, Wendy and I had that brief conversation, and then I just let it stew in my mind for two whole years before I started reading about mirrors and how Venice discovered a way to make totally transparent, clear glass and what that meant to its wealth.  Was I working those two years between Wendy's remark and my starting to do research?  I suspect so.  My head does things on its own sometimes.  Or I believe it does.  I believe the subconscious works on things without us knowing.  Then I started the research and that took another six months.  It would have taken longer if it was a city with a history I didn't know; but I already knew quite a bit about Venice.  And then I wrote.  The writing was fast -- I think I had the draft in Wendy's hands about 4 or 5 months after I started writing, and by then it had already gone through a couple of drafts.  We went on to edit it for another many months, probably close to a year.  So you can add it all up.  Books take a long time.

What do you hope readers will take away from DARK SHIMMER?

Dolce goes insane.  I think talking about insanity is still a taboo in our society.  Some people still feel embarrassed if a loved one has a mental illness.  I wanted to show how mental illness can happen to very fine people, and when it does, they can do things -- sometimes terrible things -- that they really can't help doing. And even though you may know they can't help doing it, what they do still hurts everyone around them maybe as much as if they were in control.  It's very hard to have pity in those circumstances.  But I hope the reader can have pity on Dolce.  That's what I want very much -- for readers to see that they are capable of pity even when people do the so-called "unforgivable".

I never like to talk very concretely about what i'm working on until i finish a first draft.  I'm only on ch. 8 of my new book.  But it's historical fiction and it's making me sad.  I think I may have to find a happy angle on it, something comforting, or it will tear me up to keep writing.  But I need to write this, because I am awed by the graciousness of a certain country today with regard to a certain other country (I won't name the two countries, or you will know the historical event i'm working on) -- and I want to write this story as a tribute to such graciousness.  Sometimes people rise -- they show such dignity. It's awe-inspiring. Set in medieval Venice, this captivating fairy tale retelling by award-winning author Donna Jo Napoli explores belonging, beauty, and the transformative power of love through the eyes of a teenage girl.

Dolce has grown up hidden away on an island in a lagoon. She is a giant, a freak, tormented by everyone but her loving mother. She spends her time learning the valuable secret of making mirrors. Following a tragedy, Dolce swims away and lands on an island where people see her as normal, even beautiful. Marin, a kind widower, and his little daughter bring Dolce to live with them in their grand palazzo. Eventually, Dolce and Marin marry. She secretly continues to make mirrors, not realizing that quicksilver endangers her . . . and so evil begins in innocence.

Donna Jo Napoli is both a linguist and a writer of children's and YA fiction.

Donna Jo has five children. She dreams of moving to the woods and becoming a naturalist. She loves to garden and bake bread.

At various times her house and yard have been filled with dogs, cats, birds, and rabbits. For thirteen years she had a cat named Taxi, and liked to go outside and call, "Taxi!" to make the neighbors wonder. But dear dear Taxi died in 2009.


Have you had a chance to read DARK SHIMMER yet? Do you find your subconscious working on things without your knowing? Are you able to be bold in your writing?