David Oppegaard, author of THE FIREBUG OF BALROG COUNTY, on naps and playing with his cat

THE FIREBUG OF BALROG COUNTY is the latest novel from David Oppegaard, and we're excited to have him stop by to tell us more about it. 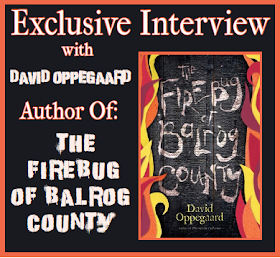 David, what was your inspiration for writing THE FIREBUG OF BALROG COUNTY?

My mother died when I was twenty-one. It took me about twelve years, but I finally felt ready to tell her story in a meaningful way without making it too dark or heavy. By featuring a smart aleck main character who was up to no good, I was able to tell a story filled with action (as opposed to a series of hospital visits) that balances humor with the sorrow of losing a parent at a young age. The Firebug of Balrog County is easily the most autobiographical of all my novels, the one novel I knew I’d have to write sooner or later. The one I wrote for my mom.

The “You Are My Sunshine” chapter when they sing to Mack’s mother as she dies. I had trouble writing it because I kept tearing up. Have you ever tried to write while you were crying? Makes your eyes sting!

As for my favorite scene, I really love the scene where Mack’s dad wakes him up and a hungover Mack first meets their new dog, Chompy, who promptly chomps on Mack’s arm and smiles at him. A legendary new pair of frenemies is born!

The collected works of William Shakespeare.

How long did you work on THE FIREBUG OF BALROG COUNTY?

About two years, give or take a century.

I learned that writing a fictional story based partially on a traumatic personal event is exhausting. I also learned to change everybody’s name so I can’t get sued!

What do you hope readers will take away from THE FIREBUG OF BALROG COUNTY?

I hope they’ve had a good time, had a few laughs, and feel reassured that there is love and hope in the world, even when you feel like it’s your darkest hour and you wish you didn’t even exist anymore.

Also, they’ll be thinking, “I should buy all Dave’s other books, too, so he can buy more cat food.”

FIREBUG is my fourth published novel. So far I’ve written fifteen novels, so I’ve got eleven novels currently unpublished. You have to leave a lot on the cutting floor before you get to the really good stuff.

Probably when I was struck by lightning and God spoke to me and said, “DAVE KEEP WRITING MAYBE YOU DON’T SUCK AT THIS.”

I listen to music, but it has to be A) an album, not the radio and B) no really new music, because I pay too much attention to the new lyrics and get distracted. I do most of my writing in my apartment at a desk in my bedroom. This is a good setup for me because I like to take a lot of naps and play with my cat, Frenchie, when I’m feeling sluggish in the brain. I also like to burn sandalwood incense once in a while.

Avoid credit cards. Get enough sleep so your mind feels sharp. Try to exercise every day. Try to write every day, too—you’ll feel better about yourself. Read all the books. Watch people carefully and try to understand the world from their point of view. Travel. Ask questions. Work harder than everyone else. If somebody asks you to dance, dance. Never forget that our time on this planet is brief and precious and destined to slip through our fingers. 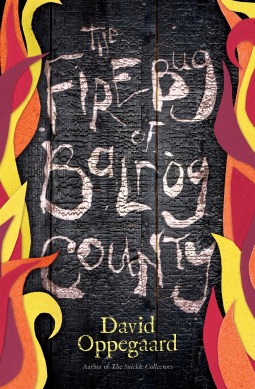 Dark times have fallen on remote Balrog County, and Mack Druneswald, a high school senior with a love of clandestine arson, is doing his best to deal. While his family is haunted by his mother’s recent death, Mack spends his nights roaming the countryside, looking for something new to burn. When he encounters Katrina, a college girl with her own baggage, Mack sets out on a path of pyromania the likes of which sleepy Balrog County has never seen before.

A darkly comic tour-de-force, The Firebug of Balrog County is about legend, small towns, and the fire that binds.

David grew up in the small town of Lake Crystal, MN, and wrote his first novel at the age of fifteen. David’s work is a blend of literary fiction, science fiction, horror, and dark fantasy. He holds an M.F.A. in Writing from Hamline University and a B.A. in English from St. Olaf College. He has worked as an optician, a receptionist, a standardized test scorer, a farm hand, an editorial assistant, a trash picker, a library assistant, a seasonal bookstore employee, and as a child minder on a British cruise ship. He teaches the occasional fiction class at Hamline University and the Loft Literary Center and currently works at the University of Minnesota. He lives in St. Paul, MN.

Have you had a chance to read THE FIREBUG OF BALROG COUNTY yet? Have you based any of your writing on a traumatic personal event? If somebody asks you to dance, do you dance?