Courtney Sheinmel, author of EDGEWATER, on not waiting for signs

EDGEWATER is the latest novel from Courtney Sheinmel, and we're thrilled to have her stop by to chat about writing. 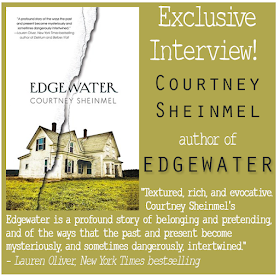 Courtney, was there an AHA! moment along your road to publication where something suddenly sank in and you felt you had the key to writing a novel? What was it?

All through childhood and adolescence, whenever anyone asked what I wanted to be when I grew up, I said “a writer.” In college, I majored in English with a concentration in creative writing. And then, as graduation loomed, I worried about whether I could really make a professional go of my childhood dream, or if I should apply to law school. You need a recommendation from one of your teachers for the law school application, and I decided to ask Professor Mary Gordon, who ran the creative writing program of my school. I was star-struck by Mary because she was (and remains) one of my favorite writers. She was also the greatest teacher I’d ever had. In my head it was a secret test: If she said yes, she would write the recommendation, then it meant I should go be a lawyer. But if she said no, I can’t write that because you need to be a writer—well then obviously that would be a sign of what was meant to be.

These days, every Tuesday, I teach a writing workshop to teenagers at an afterschool program called Writopia. I tell my students that one of the most important things I’ve learned is: You need to ask for what you want. You may not get it; but you definitely won’t get it if you never ask. But it took me a long time to see that for myself. Mary Gordon said yes to writing my recommendation. I went to law school and became a lawyer and it was a few years later, when I was out to dinner with my friend Allyson talking about how I really wanted to be a writer, that a light went off in my head: If I wanted to be a writer, I had to stop making up secret tests and waiting for signs and actually start writing. I went home that night and wrote the first part of the first chapter of what became my first published book.

I don’t think I’ve yet discovered the key to writing a novel. Each time, it feels like a small miracle when I get to the end of a first draft of a book. But that moment in the restaurant with Allyson was the key to getting started. And when I called Mary Gordon, years after I’d graduated college, to tell her I’d finished a book of my own, it was one of the proudest moments of my life.

For the first few years of my professional writing career, my writing days were all the same: I would wake up at a certain time, change from night pajamas to day ones, turn on my computer, and sit alone in my apartment, plugging away at whatever book I was working on. I didn’t listen to music, I didn’t interact with anyone, but I did have lots of snacks.

Then I became friends with Sarah Mlynowski, and all that changed. (Well, not the snack part.) Sarah invited me to write with her—not to collaborate, but to write alongside her, in the business lounge of her apartment building. She insisted it would be not only productive but also fun. I had my doubts, but I agreed to try it. It took me about five minutes to be hooked.

So now, I spend about half my days alone in my apartment. But the other half, I spend at Sarah’s. This means I have to wear actual clothes, but that’s a small price to pay for the companionship and support that I get out of it. We break for lunch and discuss plot points (or sometimes we discuss TV shows). And we often toast the end of the workday with a glass of wine. Not every day feels like a good writing day; but it does always feel like a day well spent when I’ve been with her.

What do you hope readers will take away from EDGEWATER?

I am so grateful to the people who read my books, and my greatest hope as a writer is that when readers get to the last page, they consider the time spent reading to be time well spent. So there’s the number one thing I hope readers take away: a feeling of satisfaction in their book selection. Lorrie Hollander used to be a rich girl, but now she’s lost everything because of the secrets and lies of the people around her. It’s been 12 years since Lorrie’s mother skipped town and left Lorrie in the care of her unstable aunt Gigi. Together they live in a neglected, decrepit mansion called Edgewater, the eyesore in a town of extraordinary wealth and privilege.

When Charlie, the son of an esteemed senator, takes an interest in Lorrie, her shame for her family and lifestyle runs deep. But what she doesn’t know is that Charlie’s family is hiding something, too, and that their secrets are inextricably tied. Now Lorrie must confront the truth about her family—and everything she ever thought she knew about herself.

Courtney Sheinmel is the author of several books for kids and teens including Edgewater, Positively, Sincerely, and the Stella Batts series for young readers. Her books have received numerous awards, including the Sequoyah Award (Positively), a National Parenting Publication Awards honorable mention (the Stella Batts series), and have appeared on recommended lists, including the New York Public Library's Stuff for the Teenage, and the ABC Best Books for Children. In addition to writing, Courtney served as a judge on the national level for the Scholastic Art & Writing Awards, and she received a National Scholastic Outstanding Educator Award for her work as a writing instructor at Writopia Lab, a non-profit organization serving kids ages 8-18. Courtney lives in New York City.


Have you had a chance to read EDGEWATER yet? Are you guilty of waiting for signs in your writing journey? Or have you gotten to the point you can ask for what you want? Share your thoughts about the interview in the comments!