Christopher Barzak, author of WONDERS OF THE INVISIBLE WORLD, on capturing the essence of his youth

WONDERS OF THE INVISIBLE WORLD is the latest novel by Christopher Barzak, and we're thrilled to have him here to tell us more about it. 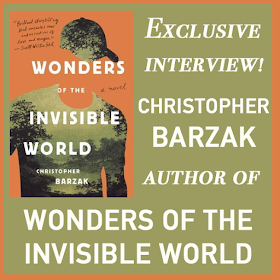 Christopher, what was your inspiration for writing WONDERS OF THE INVISIBLE WORLD?

I was initially inspired by my own family, and specifically my grandparents' farm, where I grew up. Many of the setting details for the Lockwood homestead are taken from there, with some embellishments. My grandparents have passed away, sadly, and the farm is fading now too. So I wanted to capture the place and some essence of my youth there, before it all goes away and slips through my fingers.

The scene that was probably most difficult for me to write takes place in the middle of the novel, when a particular character dies unexpectedly. I won't say who, because I don't want to spoil things, but the narrator, Aidan, loses someone important in his life, and he has to recover their body in the middle of a blizzard. It was an emotionally fraught scene to write, and it took me a long time to get it just right, or as close to right as I was able to make it.

What do you hope readers will take away from WONDERS OF THE INVISIBLE WORLD?

I hope readers will come away from reading this novel and see their own world, their own lives, their own families and their own histories with the big sense of wonder infused in this story. Aidan Lockwood feels like he’s been sleepwalking through life, each day as hazy and unremarkable as the one before it. But when his former best friend, Jarrod, suddenly moves back to town, the veil that has clouded Aidan’s mind begins to lift. Yet what Aidan discovers is that his world is haunted by stories of the past; stories that he has somehow been prevented from remembering.

But visions from the past come to him unbidden, starting with an old apple tree—a gnarled, dead thing—that haunts Aidan’s sleep, and seems to beckon to him from across his family’s orchard. And then there are the dreams that show him people and places he’s only heard of in family stories: a great-grandfather on the field of battle; his own father, stumbling upon an unspeakable tragedy; and a mysterious young boy whose whispered words may be at the heart of the curse that now holds Aidan’s family in its grip.

But there’s another presence lurking within this invisible world—someone who has been waiting to collect on a debt set into motion generations ago. As the lines between the past and the present, stories and truths, friends and lovers begin to blur, Aidan will be forced to spin a story of his own to protect those he loves, and keep the invisible world at bay.

A first YA from an acclaimed adult author.

Christopher Barzak is the author of the Crawford Fantasy Award winning novel, One for Sorrow, which has been made into the Sundance feature film "Jamie Marks is Dead". His second novel, The Love We Share Without Knowing, was a finalist for the Nebula and Tiptree Awards. He is also the author of two collections: Birds and Birthdays, a collection of surrealist fantasy stories, and Before and Afterlives, a collection of supernatural fantasies, which won the 2013 Shirley Jackson Award for Best Collection. He grew up in rural Ohio, has lived in a southern California beach town, the capital of Michigan, and has taught English outside of Tokyo, Japan, where he lived for two years. His next novel, Wonders of the Invisible World, will be published by Knopf in 2015. Currently he teaches fiction writing in the Northeast Ohio MFA program at Youngstown State University.

Have you had a chance to read WONDERS OF THE INVISIBLE WORLD yet? Have any of your settings been inspired by your youth? Do the emotional scenes take you longer to write?