Character is one of the most important aspects of a compelling story... but sometimes they can be ridiculously hard to get right. Character is intrinsically tied to plot, and it can be difficult to separate the two. Yet a character that resonates with readers can stand on his or her own.

There's a lot of discussion on how to create a relatable character in the posts below, as well as essays on what makes character's strong, and ideas on how to create well rounded characters. There are analyses on the relationship between character and plot, the breakdown on when it's okay not to have a huge character arc, and on building your main character through secondary characters. As always, there's a wealth of information in the AYAP archives... and we've collected the best of it below. 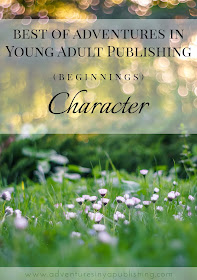 On Having Passionate Characters

"Passion, desire, and action are some of the most important engines that fuel our love of character. Or rather, they fuel the characters we love and make them do things we find fascinating to read about." - Martina Boone

"If character A encounters character B after an interval of time apart, always be sure to go back to the last time they were together and see what their feelings were about each other." - Todd Strasser


On NOT Thinking of Character

"Ultimately, characters are the heart of fiction for me. I don’t think you can think them into existence with charts and outlines though. You have to create the character from inside the character and you will make the right choices because you’re acting and reacting from this other place within." - Brian Yansky


On the Relationship Between Character and Plot


On the Character Arc

"Many readers comment that it’s refreshing to see a genuine story outcome. They say they’re tired of reading the saccharin sweet, bows and ribbon endings that bare no resemblance to reality." - Madeleine Kuderick

"[This is] a time when “strong” still seems to mean “masculine” or “physically badass” to many. Being strong isn’t about wielding knives or a witty barb; it’s about how your characters respond to the challenges life throws at them." - Tracy Banghart

"Please, dear writers of YA fiction, please consider coloring your characters without fear of criticism. Write them with the same conscientious mindset you give to creating any of your characters." - Lynn Joseph

On a Flawed Hero

"When it comes to flaws, it is the WHY behind the negative trait that is compelling. A character can be irresponsible, or hypocritical, or a workaholic, but without the WHY, the reason this trait emerged, a reader is unable to connect with them on a deeper level." - Angela Ackerman


On Characterisation and Stakes

"To make me care, a great plot has to begin with great characters who themselves care deeply about something. The more unjust the situation is for them the better, but they have to be vulnerable in some way--there has to be a hole inside them." - Martina Boone

"it is your job as a writer to bring them out and make them breathe. They can't just float around like the astronauts do in space on thin tethers. They must have background, context." - Kathryn Lasky

"The way I see it, when properly executed, off-beat/quirky/shocking/always-naked/regrettable-tattoo sporting (the list goes on…) supporting characters will not only endear your readers to your second-stringers, but will also accentuate the relatability of your main character and his/her plight through the book." - Bethany Crandell

"If you're more of a pantser, and you're looking for a quick jump start as an entry into your story, there are seven key aspects of character that will help you create one that most readers will be able to relate to." - Martina Boone

What do you think? Was there any advice that particularly resonated with you? Any posts you think we've missed that should be on this list?

Want to read the rest of the series? Click here!
Lindsey Hodder at 6:00 AM