A. S. King, author of I CRAWL THROUGH IT, on writing inside the chaos

We're honored to have award-winning author A. S. King stop by to tell us more about her latest novel I CRAWL THROUGH IT. 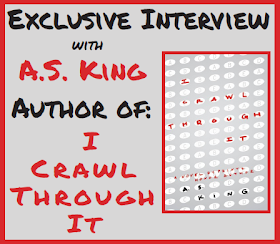 What was your inspiration for writing I CRAWL THROUGH IT?

I’d quit writing. You can read more about that by clicking here.

There is a scene where China tells her mother what happened to her. I’d left it blank for the first draft/s. (I write a lot of drafts before anyone sees the book.) I wasn’t sure how to approach it. I remember clearly the day I finally wrote it. I was overjoyed with the outcome. I still am—every time I read it. I only wish that scene unfolded more in real life with more ease, less shame, and more support for young women like China.

What do you hope readers will take away from I CRAWL THROUGH IT?

Fifteen years from writing my first novel to seeing my first published novel on a shelf. (Age 24 to age 40.) I guess that’s long. It was hard in spots, for sure, but I also wasn’t writing for publication. I was writing to write. I wrote 8 novels before I ever got published. See previously linked blog post. I have a lot of dud novels in my attic. I CRAWL THROUGH IT is #19.

I finally have an office in my house with a window. This is a huge deal if you’ve ever heard the bittersweet stories about my writing spaces in the 20+ years I’ve been writing. I write there from 8am to about 5 or 6pm. But really, sometimes there is no set schedule. My life is chaos, so I just write outside the chaos. Or inside of it. I can’t tell. Probably inside of it. I only listen to music if I have noise to drown out or sometimes if I’m revising.

I don’t usually give advice. But if I had one thing to pass along it would be: Always be writing your next book. Even if it’s just in your head.

#21 is a middle grade novel set for publication in spring 2017 about an animal who eats plastic and the boy who discovers him.

(And in my head I’ve got #22 all ready to go once my desk is clear at some point this fall. But I won’t tell you what that’s about because I’m superstitious.)
Thanks for having me around! 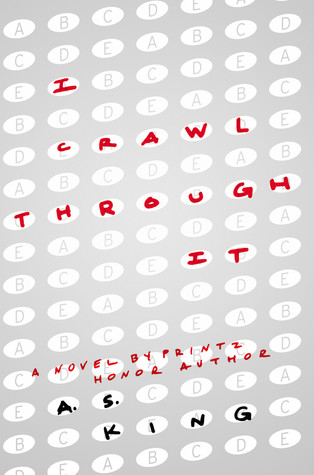 I Crawl Through It by A. S. King
Hardcover
Little, Brown Books for Young Readers
Released 9/22/2015

Four teenagers are on the verge of exploding. The anxieties they face at every turn have nearly pushed them to the point of surrender: senseless high-stakes testing, the lingering damage of past trauma, the buried grief and guilt of tragic loss. They are desperate to cope, but no one is listening.

So they will lie. They will split in two. They will turn inside out. They will even build an invisible helicopter to fly themselves far away...but nothing releases the pressure. Because, as they discover, the only way to truly escape their world is to fly right into it.

The genius of acclaimed author A.S. King reaches new heights in this groundbreaking work of surrealist fiction; it will mesmerize readers with its deeply affecting exploration of how we crawl through traumatic experience-and find the way out.

A.S. King is best known for her award-winning young adult novels, though she writes novel-length and short fiction for adults as well. After more than a decade in Ireland dividing herself between self-sufficiency, restoring her farm, teaching adult literacy, and writing novels, she returned to the US in 2004.

Amy's newest YA novel, Glory O'Brien's History of the Future has garnered six starred trade reviews and landed on several end of year best lists since its release in October 2014. Reality Boy (October 2013) was a A New York Times Editors' Choice,Publishers Weekly, Kirkus and School Library Journal Best Book of 2013, a Junior Library Guild Selection, Amazon Best Books for October, and a Winter 2013-2014 Kids' Indie Next List Top Ten pick. 2012's Ask the Passengers (Little, Brown October 2012) is a Los Angeles Times Book Prize Winner, a Junior Library Guild selection, a Kirkus Reviews, Publishers Weekly & School Library Journal Best Book of 2012, an Indie Next List pick and has been called "Another thoughtful, and often breathtaking achievement" by Booklist in one of six starred trade reviews for the book. Everybody Sees the Ants (Little, Brown October 2011) was an Andre Norton Award finalist, a Cybils finalist, and a 2012 YALSA Top Ten book for young adults. Her 2010 YA novel, Please Ignore Vera Dietz was a 2011 Michael L. Printz Honor Book, an Edgar Award Nominee, a Kirkus Reviews Best Book for Teens 2010, a Junior Library Guild selection and a YALSA Best Fiction for Young Adults pick. Her first YA novel, The Dust of 100 Dogs, was an ALA Best Book for Young Adults, an Indie Next pick and a Cybil award finalist. Her short fiction for adults has been widely published and was nominated for Best New American Voices 2010. Her short fiction collection, Monica Never Shuts Up is available in paperback and all ebook formats. Amy now lives in Pennsylvania with her husband and children, teaches writing at Vermont College of Fine Arts MFA program, and is a huge fan of Kurt Vonnegut, corn on the cob, libraries, and roller skating.

Have you had a chance to read I CRAWL THROUGH IT yet? Have you ever quit writing only to be compelled to come back to it? Do you write your books in your head before putting them on paper?