TWO New Release Giveaways, plus author interviews and what's new this week of 8/17

It's another small offering this week, with just two new books releasing: Kate Elliot's Court of Fives and Tom Leveen's Shackled. On Wednesday, voting opens to decide the Top 10 entries to our Red Light, Green Light contest - make sure to check back and vote for your favorite! 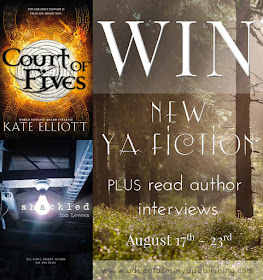 In this imaginative escape into an enthralling new world, World Fantasy Award finalist Kate Elliott begins a new trilogy with her debut young adult novel, weaving an epic story of a girl struggling to do what she loves in a society suffocated by rules of class and privilege.

Jessamy's life is a balance between acting like an upper class Patron and dreaming of the freedom of the Commoners. But at night she can be whomever she wants when she sneaks out to train for The Fives, an intricate, multi-level athletic competition that offers a chance for glory to the kingdom's best competitors. Then Jes meets Kalliarkos, and an unlikely friendship between a girl of mixed race and a Patron boy causes heads to turn. When a scheming lord tears Jes's family apart, she'll have to test Kal's loyalty and risk the vengeance of a powerful clan to save her mother and sisters from certain death.

Author Question: What is your favorite thing about Court of Fives?

The main character, Jes, because she is so incredibly determined and competitive and WILL NOT QUIT. Because she loves her family even when they frustrate her, because she is focused and pragmatic and willing to work hard to get what she wants, and because she doesn’t quite know her own heart and her own prejudices and has to learn the hard way that she has blind spots about how the world she lives in really works.

Author Question: What is your favorite thing about Shackled?

My favorite thing about SHACKLED is that it's the most intensely personal novel I've written. My third novel, MANICPIXIEDREAMGIRL, was sort of an homage to real events that happened to me in high school (although it was still entirely fictional)...but SHACKLED is me on a much deeper, serious level. I had to return to places in my head and heart that I've spent years trying to recover from, namely PTSD and a panic disorder. I think going there helped me, though, and I hope the novel will help others in the same way. Author Question: What is your favorite thing about Beyond Clueless?

It’s funny! At least, it cracks me up still, and I’ve read the text more times than is psychologically healthy. The story is narrated by the main character, Marty, who is a freshman at an all-girls high school outside Cleveland, Ohio. For me, the humour lands because it’s familiar; Marty’s world is not the one in which I grew up, but at the same time it’s exactly true to how I grew up. There aren’t that many books in which I recognize my own experience, with the very real limitations of suburban life for middle-class teens. Your perspective is smarter and more self-aware than adults give you credit for. You can’t drive, so you’re constantly waiting for a parent or a friend to give you a lift somewhere. And for kids with long commutes to parochial schools, they do lead divided lives between school and their hometowns. I tried depicting life as lived by most teens, of being on the edges of popularity, or notoriety. Of social groups that overlap but aren’t constantly in conflict – very few dramas can actually attract an entire school’s attention. Of having homework all the time, and talking about it. Twelve years ago Stella and Jeanie vanished while picking strawberries. Stella returned minutes later, with no memory of what happened. Jeanie was never seen or heard from again.

Now Stella is seventeen, and she's over it. She's the lucky one who survived, and sure, the case is still cloaked in mystery—and it's her small town's ugly legacy—but Stella is focused on the coming summer. She's got a great best friend, a hookup with an irresistibly crooked smile, and two months of beach days stretching out before her.

Then along comes a corpse, a little girl who washes up in an ancient cemetery after a mudslide, and who has red hair just like Jeanie did. Suddenly memories of that haunting day begin to return, and when Stella discovers that other red-headed girls have gone missing as well, she begins to suspect that something sinister is at work.

And before the summer ends, Stella will learn the hard way that if you hunt for monsters, you will find them.

Author Question: What is your favorite thing about The Creeping?

Oh wow, that's a really tough question. I won't cop-out though and say I can't choose, but I might cheat a little.

I love the relationships and friendships in THE CREEPING. That's a pretty encompassing answer, I know. When I had this spark of an idea to write the story of a seventeen-year-old girl who eleven years before survived a very mysterious event in the woods of her small town, I knew I wanted to show the relationships that save her, both literally and figuratively. I wanted her friends to be as vivid and necessary to the reader as they are to the main character, Stella. Friendships can loom very large in life, especially when you're young. I wanted to be truthful in representing their complexities: loyalty, the fierce love shared by friends, and the intimate ways friends can wound each other, unintentionally and intentionally.

Friendships between girls and women are of particular interest to me. It was an aim of mine to give THE CREEPING's characters agency over their lives, bodies, and minds. Developing these relationships was one of my favorite parts of the process. Although it might not be obvious by its haunting title, THE CREEPING is a book about friendship as much as it is betrayal and about goodness as much as it is evil. At a family meeting, Ror declares her purpose: I am an artist.

But she doesn’t really know what that means. Raised on a commune, she’s never attended a day of school, and has seen little of the outside world. What she knows best is drawing. To her, it’s like breathing; it’s how she makes sense of the world.

When her father torches the commune—and himself—Ror’s life changes. She, her mother and sister end up in a homeless residence in Manhattan, where she runs into trouble—and love—with Trey, the leader of Noise Ink, a graffiti crew.

On the city’s streets, and in its museums and galleries, Ror finds herself pulled in different directions. Her father wanted her to make classic art. Noise Ink insists she stay within their lines. Her art teacher urges her to go to college. What does she want?

Ror’s journey is a seamless blend of words and pictures, cinematic in its scope—a sharp-edged, indelible work of art that will live inside your head.