August has begun, which means it's time once again to sum up the month that was. This month, our attention was captured by snippets into the lives of successful authors; questions of openings, dialogue, and creating that reacher-character connection; how to get our butts in those chairs; and more.

Take a look over the links below, and, as always, tell us of the amazing writing links you find throughout the month by leaving comments below! 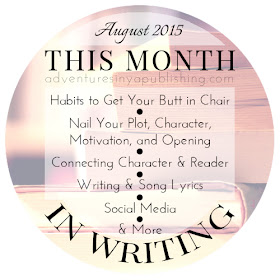 Many writers are plagued by insatiable curiosity. Especially about the people who have taken our dreams and turned them into their reality. Interested in taking a look at the career snapshot of a children's book author? Yes, please!

Writers block is a writer's number one fear. Even those of us lucky enough to be able to push through the fog on a regular basis still occasionally get struck down with a complete inability to continue. Be it an issue with your outline, or a lack of planning, there are lots of ways to get over writers block.

We all know someone who confidently announces that they're going to be an author... but then never seems to make any progress. Often, that person is us. If you, too, find yourself struggling to make headway on your writing dreams, this list of six habits that will get your butt in the chair might be for you. 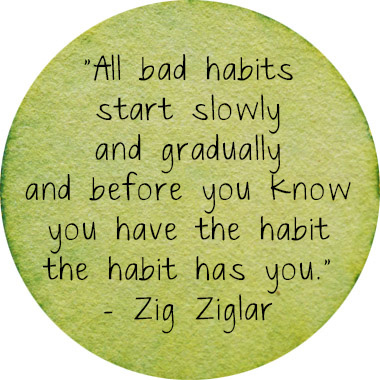 Writing a great novel has a lot to do with examining the relationship between cause and effect. K.M. Weiland reminds us why even positive events should have consequences, and that even 'good' actions can have devastating side effects.

Beginnings are the bane of the writer's existence. Often, you'll write what seems like the best beginning your book could have hoped for, only to realise in your next round of revisions that it didn't quite hit the mark. Check out these six steps to nail your plot, motivation, character and story opening to help get it right.

Often considered one of the most difficult thing to get right, dialogue can utterly destroy your novel. Amy Nichols has put together a useful guide to help fix issues created by dead-end dialogue.

Creating the feeling of connection between reader and character is one of the primary goals of writing a compelling novel. If you've ever struggled with character sympathy, or you're not sure if your characters live up to expectations, this is the article for you.

Compelling settings lie at the heart of fantasy novels, so where do you turn when creating your fantasy world? One of the most profound places to start worldbuilding is in response to contemporary society - create your fantasy world from social critique.

If your character is influenced by certain music, it's okay to reference those songs in your novel, right? Well, sometimes. You can certainly refer to the music, but when it comes to including actual lyrics, there are some rules to follow when your writing includes song lyrics.

Delving into the world of social media as an author seems like an easy choice, but what about the less easy things, like figuring out how much of your life to share, and dealing with the sudden onslaught of stimulation? Writers wondering how to safely navigate social media, we have your answer.

There are a number of things that determine your success as an author, and the shape of your future career. Book returns are one of them. Spunk on a Stick examines what book returns are, and what they mean for authors.

Win a Copy of How to Write a Novel! 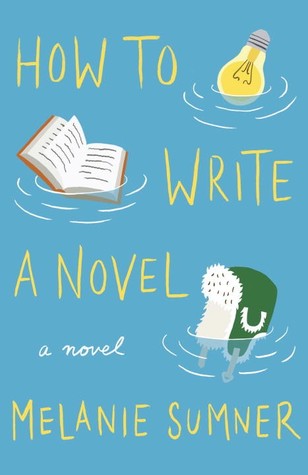 How to Write a Novel
by Melanie Sumner
U.S. Only
Vintage
Released 8/4/2015

In the spirit of Maria Semple’s Where’d You Go Bernadette and Graeme Simsion’s The Rosie Project, How to Write a Novel is the hilarious and heartfelt story of a single-mother family struggling to get back on track after tragedy brings them back home to Georgia. A VINTAGE CONTEMPORARIES ORIGINAL.

Aristotle “Aris” Thibodeau, age 12.5, is writing the Great American Novel. According to Write a Novel in Thirty Days! it shouldn’t be that hard—all she needs to do is write what she knows. Conveniently, Aris’s world is full of people who are more fun to write about than live with, like her single mother, Diane. Diane is an adjunct English professor who flirts with unemployment more than her Match.com dates, and, regrettably, does not know the difference between hair that looks messy and hair that is messy. Aris knows that if Diane would just accept that the perfect man is already under her nose—Penn MacGuffin, handyman, nanny, and self-described PMI (“Positive Male Influence”)—their lives would change for the better. After all, nothing gets a novel off the ground like a budding romance. But when a random accident exposes Aris to a dark part of her family’s history, she’s forced to confront that fact that sometimes in life—as in great literature—things might not work out exactly as you hoped.