Michelle Levy, author of NOT AFTER EVERYTHING, on a writing style similar to method acting

We're delighted to have Michelle Levy stop by to tell us more about her debut novel NOT AFTER EVERYTHING. 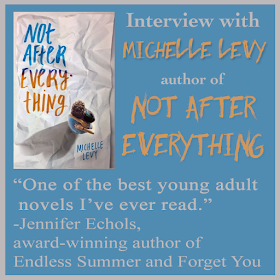 Michelle, what is your favorite thing about NOT AFTER EVERYTHING?


My favorite thing would have to be the characters. I loved discovering all the new things about each and every one of them as I wrote (even the not-so-nice ones). Basically I wish Henry and Dr. Dave were real people.

The hardest scenes for me to write were the ones with the abusive father. My writing style is sort of like method acting, I try to become the character in order to truly get their motivation and dialogue. He was one of the last characters I fleshed out in revisions because I just wasn’t ready to go there. I’m proud of those scenes now and I really hope people will see all the layers of that character. The scenes I love the most are probably the post holiday dinner scenes where Jordyn (the love interest)’s family is sitting by the fire while her stepdad is playing the guitar and singing; where Tyler truly gets a taste of the family he’s always wished he had.

Well, the comp titles my publisher used were Eleanor & Park, Willow, and The Spectacular Now. And I had a reviewer compare it to Robyn Schneider’s The Beginning of Everything. Not bad company to be in, right? I love all of those books!

How long did you work on NOT AFTER EVERYTHING?

I’m a fast drafter. I drafted Not After Everything in a little under five weeks. But then I revised it for about four months before I queried it. And then I did a revision with my agent before we sent it out on submission. And then after it sold I did another three revisions with my editors before copyedits et al.

NAE was my fifth book. I queried two others, one of which I shouldn’t have because it wasn’t very good, and the other, though I did get a good amount of requests and some great feedback, was paranormal at a time when nobody wanted to touch paranormal. One of the agents who gave me really great feedback—probably the nicest rejection letter known to man—told me that I should write contemporary. She ultimately didn’t become my agent but she started me on the right path. And then when I started querying Not After Everything, I finally got a lot of requests—and a lot of rejections, too. All in all, I’d say that over the course of three years and three books I probably got around 150 agent rejections. I had an amazing submission process though. Basically my agent pitched my book on Wednesday and then on Friday she got the news that Dial was going to make us an offer on Monday, and they did! So I guess that makes up for all the years of rejection.

I’m working on something dealing with bullying and psychological issues. You know, something really light. ;-) What can I say? I love digging deep into the human psyche. Fans of Eleanor and Park, The Spectacular Now, and Julia Hoban's Willow won't be able to put down this gritty but hopeful love story about two struggling teens.

Tyler has a football scholarship to Stanford, a hot girlfriend, and a reliable army of friends to party with. Then his mom kills herself. And Tyler lets it all go. Now he needs to dodge what his dad is offering (verbal tirades and abuse) and earn what his dad isn’t (money): He needs a job. It’s there that he reunites with Jordyn, his childhood best friend, and now the token goth girl at school. Jordyn brings Tyler an unexpected peace and, finally, love. But with his family in shambles, he can’t risk bringing Jordyn too deeply into his life. So when violence rocks Tyler’s world again, will it be Jordyn who shows him the way to a hopeful future? Or after everything, will Tyler have to find it in himself?

This tough, realistic page-turner reveals a boy's point of view on loss and love.

Michelle Levy was born and raised in Littleton, Colorado, where she memorized books before she was able to read, tricking her parents into thinking she was a genius. At eighteen she moved to Los Angeles, to pursue a career in casting for film and television. In her many years of casting she has been privileged to work on projects such as Six Feet Under, Deadwood, Bruce Almighty, Mr. Popper’s Penguins, Vampire Academy, and many more. Michelle always secretly harbored a desire to write. She spent many insomnia-filled nights dreaming up stories that she never thought to write down. When she finally set out to get something on the page, the words flew out of her until she had her first completed manuscript and she never looked back. She still lives in Los Angeles, but desperately misses thunderstorms, and even the occasional snowstorm, so she visits Colorado quite often.


Have you had a chance to read NOT AFTER EVERYTHING yet? Do you become your characters in order to truly get their motivation and dialogue? Are you a fast drafter like Michelle?