Leo Hunt, author of THIRTEEN DAYS OF MIDNIGHT, on pretending to adapt a draft into a film script

We're thrilled to have Leo Hunt stop by to tell us more about his debut novel THIRTEEN DAYS OF MIDNIGHT. 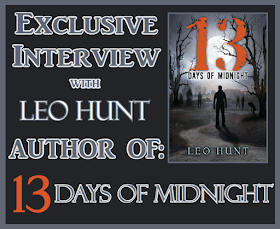 Leo, what was your inspiration for writing THIRTEEN DAYS OF MIDNIGHT?

Various sources. When I was a teenager I was very taken with 20th Century horror like Stephen King, HP Lovecraft, that sort of thing. I adore horror as a genre, especially occult horror, so I wanted to write a story that would have some of that atmosphere and imagery: moonlit rituals, stone circles, forbidden books that contain knowledge man was not meant to have, etc. I was also interested in YA at the time as a way of exploring the way family relationships change as you grow older, how you deal with the realisation that your parents are fallible human beings (or maybe even evil), so the idea of a father who had made a Faustian deal which ended up having an impact on his son was immediately interesting to me. I was working on this thing at the time about a failed stage magician who had a ghost butler, and that sad washed-up magician character ended up becoming Luke’s father Horatio in the final novel. The story was the focal point of a few different things I’d been thinking about for a while.

I can’t say too much in detail for obvious reasons but the hardest scenes to write were the scenes in the final chapter. I think the closer you get to the end, the more each sentence and action ‘weighs’, and a bad ending can easily spoil all the careful work you’ve put in along the way. As for whether I’m proud of those scenes… I think so. It’s not really up to me to say if they ‘work’ or not.

The scene everyone seems to like best is the short scene that’s narrated by a dog (it makes slightly more sense in context), and I have to say I really loved how that came out. I think every review so far has mentioned that part. So I’m pleased with that one.

If you want teenagers battling the unquiet dead, I can’t recommend Garth Nix’s ‘Old Kingdom’ series enough. Excellent YA with necromancers, zombies, magic, sinister spirits; that series is a big influence. In ‘literary’ grown-up fiction I think my favourite ghost stories are ‘The Haunting of Hill House’ by Shirley Jackson, an obvious classic, and ‘Beyond Black’ by Hilary Mantel, a UK novelist who recently got really big from her Thomas Cromwell novels. I think ‘Beyond Black’ is the best novel about ghosts I’ve ever read.

How long did you work on THIRTEEN DAYS OF MIDNIGHT?

The first page was written on 25th September 2010, and the final draft was completed on 8th December 2014. So just over four years. I should point out that this wasn’t four years of constant re-writing; I was a full-time university student during this period of time, which limited how much work I could do. There were also long fallow periods where I didn’t work on the novel at all. The first draft took nine months, the final re-draft took just over three.

A lot about writing. Really, almost everything about writing. The novel is nearly unrecognisable from the draft I wrote in 2010, except for characters and setting. I learned about plotting, editing, pacing, story structure, tone… I could go on. I cut it down from 120,000 words to 60,000 in 2012, and that was probably the best lesson I learned: how to get to the meat of the story and cut the extraneous details. No editor is going to thank you if you send them a story that’s twice as long as it needs to be, so get used to being really honest with yourself about which characters, incidents, etc are necessary for the plot to function, and try and pare back as much as you can. Film writing guides are great for teaching you about this actually; commercial film scripts will ideally be as lean as possible, so I pretend to be adapting my draft into a film.

Also it taught me that I’m really sensitive about my grammar mistakes and I read my copy-editor’s notes through my fingers like I’m watching a scary film.

What do you hope readers will take away from THIRTEEN DAYS OF MIDNIGHT?

There were quite a few… there was this insane epic called ‘Dark Town’ which I worked on from about 13 to 17 in various drafts… that was really enormous, I think the unfinished draft was like 200,000 words or something ridiculous. It was about this dystopian city with a city full of demons underneath it. That was more like three novels put into one. I didn’t know what I was doing and it would change protagonist mid-story and stuff, but there’s a kind of exuberant energy in the writing that I still admire. I was just 100% having fun and amusing myself. There was this sci-fi thing about a girl who lived on another planet that I never finished. Then I started ‘Thirteen Days’ when I was 19, in university. That was the first thing I properly finished.

There are two I remember clearly. One came about a week after I started, back in September 2010. I had written a first scene, with Luke getting a letter about his dead father. I had Luke and his dog Ham and not much else. I knew there would be ghosts but I wasn’t worried about that, because I felt certain I could invent them. What I was worried about was where Luke lived. What did his hometown look like? What kind of place was it? It’s the kind of imaginative grunt work that’s really important but not much fun to do. After a week or so I suddenly thought ‘Oh, I can just make it the town where I grew up’ and so I did that. Maybe that’s cheating? I changed the names of streets and stuff but whenever I’m thinking of a scene I’ll just picture the actual place in my hometown and that’s where I set it.

The other was in a letter from my editors last year. They made lots of good suggestions but one was that Mr Berkley should give Luke the Book of Eight right at the start. The Book of Eight is this magical book and a lot of the plot of older drafts was revolving around finding it, but I couldn’t make it work. I just never came up with a good reason for it to be hidden. I realised if Luke had the thing from the start but couldn’t read a word of it for whatever reason, it might be more interesting. I mean, that would drive anyone crazy, right? Having the exact thing you need sitting in front of you, with no way to make use of it? The final plot just flew together after that, and now I can’t imagine the story without the Book of Eight being there the whole time.

I try not to be too ritualised about this because you don’t want to be the writer equivalent of those animals that get so specialised to their ecosystem niche that they can only survive in like a swamp on this one particular island. Those animals go extinct really easily. So I don’t have one, but I generally like to have music playing if I’m in public, because I’m a terrible eavesdropper and will listen to conversations around me instead of working. Also I have this program that blocks internet use on my laptop which is a must.

I would say if you are serious about being a writer and the craft you will never stop reading. Every writer, every book, good or bad, has something you can take from it, some quirk of voice, a literary technique, an idea you’ve never come across before. Even the most tedious, turgid, derivative novel can teach you something: it can teach you what not to do. Don’t be afraid of nonfiction, as life is often stranger and more interesting than anything anyone could invent. And I would add, please go outside your comfort zone. If you only read fantasy stories, pick up a novel about real people in the real world. If all you read is realism, please try a book with spaceships or dragons in it. If you’re only familiar with modern fiction then read something that was written back before the modern english language even existed. Your writing will never suffer for having a larger pool of influences to draw upon.

I’m pleased to report I’m working on a sequel to ‘Thirteen Days of Midnight’, currently entitled ‘Eight Rivers of Shadow’, which should be out with Candlewick in the US next year. When Luke Manchett’s estranged father dies unexpectedly, he leaves his son a dark inheritance: a collection of eight restless spirits, known as his Host, who want revenge for their long enslavement. Once they figure out that Luke has no clue how to manage them, they become increasingly belligerent, and eventually mutiny. Halloween (the night when ghosts reach the height of their power) is fast approaching, and Luke knows his Host is planning something far more trick than treat. Armed with only his father’s indecipherable notes, a locked copy of The Book of Eight, and help from school outcast Elza Moss, Luke has just thirteen days to uncover the closely guarded secrets of black magic and send his unquiet spirits to their eternal rest—or join their ghostly ranks himself.

LEO HUNT wrote Thirteen Days of Midnight in his first year of college and signed with an agent the following year. When he was younger he wanted to be either an archaeologist or an author, and when he learned that archaeologists didn’t unearth piles of perfectly preserved dinosaur bones every time they put a spade in the ground, he decided to write books instead. He lives in northeast England.

Have you had a chance to read THIRTEEN DAYS OF MIDNIGHT yet? Have you ever cut the length of your manuscript in half while editing like Leo did? Do you ever read outside your comfort zone?