Stacey Trombley, author of NAKED, on never being afraid to experiment

We're excited to have Stacey Trombley with us to share more about her debut novel NAKED. 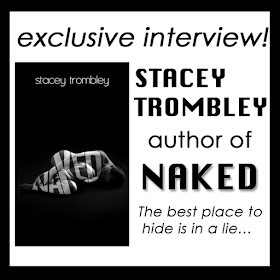 Stacey, what did this book teach you about writing or about yourself?

I learned that I don’t need to box myself in. That main characters don’t need to be bland, or just like me. Anna is my complete opposite in many ways, yet she’s an amazingly three dimensional character. I still don’t know how I hopped into her head the way I did, that was one of my miracles. Going forward, I won’t feel afraid to write what I’m drawn to write. Sometimes it may not turn out well, and that’s ok. Getting another perspective right isn’t always easy. But never be afraid to experiment or push the envelope because if it works, it could be something magical.

I did a massive R&R with my editor and a huge part of that was adding PLOT to this book. There were bits and pieces of conflict and had some tense events but what I realized (eventually) is that those events didn’t BUILD on each other. You shouldn’t be able to pick up events and move them around easily because each scene should CHANGE things in the story and with your character. Through my editor, I learned how to structure a book in a way that built up to the events, layered tension throughout the book so that the reader could see the conflict layers early on. Some books naturally come with plot but others need to be planned out. I learned the art of plotting, using a beat sheet or outline.

Well, I recently had a baby so my writing rituals have changed a lot! Right now I’m writing this listening to Rockabye Lullabies while baby naps. BUT I love to write at Panera bread and that’s where most of Naked was written. I listen to music sometimes but I zone out so quickly it really doesn’t matter what I’m listening to. My playlists are more for getting in the mood for the book, character or even a particular scene before my fingers hit the keyboard.

Don’t follow trends, or what you think others want to see (especially agent/editors). Write what YOU want to read, what you wish was sitting out there on the shelves right now. If you’re excited (or even nervous) to share your book concept/plot with others: agents, editors, friends, family, your beta readers, the WORLD! Then you probably have something special.

But sometimes no one else will see the special but you. That’s ok. No book is a failure, even if you have twelve shelved books. You learned something new from each one. And you never know, the world may be ready for some of those books later on. Publishing is a lot about timing and lot about luck. Don’t take the ups and downs too hard. We all have our own timeline. We all have our own paths. Never be ashamed that yours isn’t the same as someone else’s, or even what you expected/hoped it would be(believe me, it’s rarely what we expect.)

I’m working on a YA contemporary romance set in Haiti. I’ve always wanted to write something in Haiti because it’s a place that sticks with you. I love it there and I’m super excited to take readers on a journey to one of the places that made me who I am! The best place to hide is in a lie…

I could never fit in to the life my parents demanded. By the time I was thirteen, it was too much. I ran away to New York City…and found a nightmare that lasted three years. A nightmare that began and ended with a pimp named Luis. Now I am Dirty Anna. Broken, like everything inside me has gone bad.

Except that for the first time, I have a chance to start over. Not just with my parents but at school. Still, the rumors follow me everywhere. Down the hall. In classes. And the only hope I can see is in the wide, brightly lit smile of Jackson, the boy next door. So I lie to him. I lie to protect him from my past. I lie so that I don’t have to be The Girl Who Went Bad. The only problem is that someone in my school knows about New York. Someone knows who I really am. And it’s just a matter of time before the real Anna is exposed…

Stacey Trombley lives in Ohio with her husband and the sweetest Rottweiler you’ll ever meet. She thinks people are fascinating and any chance she has, she’s off doing or learning something new. She went on her first mission trip to Haiti at age twelve and is still dying to go back. Her “places to travel” list is almost as long as her “books to read” list. She wants to bring something new to the world through her writing, but just giving a little piece of herself is more than enough.

Keep a look out for her debut novel NAKED, coming from Entangled Teen in 2015.

What did you think of our interview with Stacey Trombley, author of NAKED? Let us know in the comments?