Sofia Quintero, author of SHOW AND PROVE, on not playing God with your characters

SHOW AND PROVE is the latest novel from Sofia Quintero, and we're delighted to have her stop by to tell us more about it. 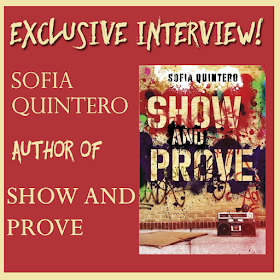 Sofia, what scene was really hard for you to write and why, and is that the one of which you are most proud? Or is there another scene you particularly love?

The dance scenes were technically challenging because I was never a b-girl. Research alone wasn’t going to cut it, so I actually hired Rokafella to create what I called textual choreography. When we met, I described the scenes I wanted, a little bit about the characters involved and how they functioned in the overall story. She came back to me with two routines that were the foundation of the battle scenes. Then I had the task of transforming that textual choreography into compelling scenes. I wanted them to play in the readers’ minds like a movie where they can hear the music, imagine the moves, feel the energy. It was very difficult, and I’m still not sure how well I pulled it off. Readers will be the judge.

Then there were scenes that were emotionally hard to write because I didn’t have firsthand experience with what my characters were going through. Anger and amusement, those are easy for me; but amidst all the summer revelry, my four primary characters, and especially Smiles and Nike, are grappling with deep losses. They’re losing important relationships, their old sense of self, and, most of all, what’s left of their innocence. We all experience these losses, but Smiles, Nike, Cookie, and Sara are doing so in particular ways that I could only imagine. In that last conversation between Cookie and Smiles, she reveals something that surprised even me.

So I strongly disagree with the writing tip that says you should know everything you can about your characters before you start to write the story. Yes, you should know them pretty well, including key events and relationships from their past. But don’t approach character development like you’re playing God. This is particularly true when you’re writing about and for teens, who, by virtue of adolescence, are sorting and shifting multiple identities.

One major thing I embraced about myself as a writer through writing SHOW AND PROVE is how much my own emotionality has become a compass for the craft. That’s why it’s rewarding for me to write deeply emotional scenes, especially if I don’t have firsthand experience of my character’s challenge. Ironically, the harder they are to write, the easier they are to evaluate because if I’m not feeling the emotion the scene is supposed to evoke, I know it’s not working. If a sad scene has me in tears as I’m writing, I know it’s working and that I should trust that visceral reaction to my own work over any writing rules or techniques. There’s something deeply satisfying and encouraging to me as the creator to have that confidence about a scene’s emotional impact before it gets to the reader. This is especially true when those scenes maintain their potency draft after draft.

So now I’m going to be shameless about aiming for that personal catharsis when writing stories from here forward. It’s going to sound naive or silly to say this now, but it hadn’t occurred to me that this was possible or even desirable, given that I wasn’t writing nonfiction, never mind autobiographical work. I had an intellectual understanding that fiction could be personal. Now I realize, on a visceral level, that fiction must be personal.

What do you hope readers will take away from SHOW AND PROVE?

I hope that teens and the adults they know who came of age in the ’80s will read SHOW AND PROVE together, making comparisons between what it was like to grow up then and now. I’d love for them to have discussions where they draw parallels between the political and artistic figures and events referenced in the novel and contemporary ones. We need more intergenerational dialogue that isn’t motivated by one generation telling the other how they’re doing it all wrong.

Was there an AHA! moment along your road to publication where something suddenly sank in and you felt you had the key to writing a novel? If so, what was it?

I had an AHA! moment not too long ago affirming that I’m meant to write. I’ve moved recently and was sifting through tons of old papers, and I came across some material that I had written in my late teens and early twenties. One, the material I recovered was critical to the next YA novel I want to write, which tells me that the time has come to tell that story. Two, I was surprised how strong the writing was, especially given that I had yet to take a single creative writing workshop. Not only was my voice present and clear, it wasn’t buried under cumbersome attempts to sound like anything other than myself. The focus was on telling the story. Sure, I dreamed of getting published back then, but that’s not what was fueling my writing. Rereading those pages brought back the memories of writing for the love of telling the untold story. I remembered sharing those pages with my cousins and friends, and how much they loved reading about characters who reminded them of themselves and how much that inspired me to write more pages. So here I am, six novels and twice as many short stories and novellas into my publishing career, and I find this affirmation that not only did I have a natural ability for writing fiction, it was also a reminder to stay true to the voice that cares only about telling the story. She knows what she’s doing.

What’s your writing ritual like? Do you listen to music? Work at home or at a coffee shop or the library, etc.?

Listening to music while writing SHOW AND PROVE was actually a major distraction at first. I’d sit down to write and find one song or video online to inspire me. I’d find one jam, which would lead to another, and then down the modern rabbit hole named YouTube I would go. An hour would pass, and while I’d get a workout doing old-school dance, I wouldn’t write a lick. And yet denying myself the music wasn’t a solution either because the music sparked a great deal of memories that were rich in detail, both culturally and psychologically. In fact, the more obscure the song, the richer the detail and the stronger the reconnection to the experience of being a teenager at that time.

I eventually discovered a solution when I was on the elliptical machine and decided to tune in to my Grandmaster Flash & the Furious Five station on Pandora instead of listening to my usual playlists. It was extremely effective as a moving meditation, as so many things came to me—nuances about the characters and their relationships, remedies to story problems, ideas for new scenes and improvements to existing ones. This became a ritual. I’d rush home, jump into the shower—and we know that’s an act that unlocks all kinds of insight—and write. And having a productive writing day would inspire me to be consistent about working out, so when I stick to this routine, I win on many levels.

Writers often like to boast about all the necessities we sacrifice to get the words out. The sleep we lose, the workouts we miss, the showers we skip, the meals we forget to eat. It’s one thing to be genuinely inspired and to ride that lightning. But since the overwhelming majority of writing is driven by sheer discipline and not sparks of inspiration, we need to cut the self-abusing bullshit, stop glamorizing it and otherwise using it to prove our writerly bona fides. Not getting sleep or exercise is actually harmful to creativity in the long run, so rather than skimp on those activities, actually honor them. Incorporate them into your creative rituals. A poignant coming-of-age story about two boys finding their way in the South Bronx in the mid-1980s.

The summer of 1983 was the summer hip-hop proved its staying power. The South Bronx is steeped in Reaganomics, war in the Middle East, and the twin epidemics of crack and AIDS, but Raymond “Smiles” King and Guillermo “Nike” Vega have more immediate concerns.

Smiles was supposed to be the assistant crew chief at his summer camp, but the director chose Cookie Camacho instead, kicking off a summer-long rivalry. Meanwhile, the aspiring b-boy Nike has set his wandering eye on Sara, the sweet yet sassy new camp counselor, as well as top prize at a breakdancing competition downtown. The two friends have been drifting apart ever since Smiles got a scholarship to a fancy private school, and this summer the air is heavy with postponed decisions that will finally be made.

Raw and poignant, this is a story of music, urban plight, and racial tension that’s as relevant today as it was in 1983.

Sofia Quintero is the author of several novels and short stories that cross genres. Born into a working-class Puerto Rican-Dominican family in the Bronx., the self-proclaimed Ivy League homegirl earned a BA in history-sociology from Columbia University in 1990 and her MPA from the university's School of International and Public Affairs in 1992. After years of working on a range of policy issues from multicultural education to HIV/AIDS, she decided to pursue career that married arts and activism. Under the pen name Black Artemis, she wrote the hip hop novels Explicit Content, Picture Me Rollin and Burn. Sofia is also the author of the novel Divas Dont Yield and contributed novellas to the chica lit anthologies Friday Night Chicas and Names I Call My Sister. As an activist, she co-founded Chica Luna Productions (chicaluna.com), a nonprofit organization that seeks to identify, develop and support women of color who wish to create socially conscious entertainment. She is also a founding creative partner of Sister Outsider Entertainment, a multimedia production company that produces quality entertainment for multicultural audiences.


Have you have a chance to read SHOW AND PROVE yet? Do you make your fiction writing personal? Are you harming your creativity by sacrificing necessities?