Six Steps to Nail Your Plot, Motivation, Character, and Story Opening plus AN EMBER IN THE ASHES Giveaway

I was reading an interview with NYT Bestselling author Tess Gerritsen over on Novel Rocket, yesterday, and she mentioned that her favorite piece of writing advice is to focus on the character's predicament. I love, love, love that, because it actually addresses four different aspects of your WIP. 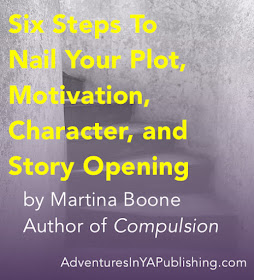 In one fell swoop, you can nail the core of your character, the movement of your story, the place you start it, and how you tell it.


That's it. When you look at it from the standpoint of the character's predicament, every aspect of the story comes together. Whether you're a plotter or a pantser, and regardless of whether you're writing a fantasy or sci fi novel, a romance, a contemporary, or virtually anything else, these six simple steps will help you get enough information to structure it in a way that will let it feel like it's writing itself. An Ember in the Ashes

I WILL TELL YOU THE SAME THING I TELL EVERY SLAVE.

THE RESISTANCE HAS TRIED TO PENETRATE THIS SCHOOL COUNTLESS TIMES. I HAVE DISCOVERED IT EVERY TIME.

IF YOU ARE WORKING WITH THE RESISTANCE, IF YOU CONTACT THEM, IF YOU THINK OF CONTACTING THEM, I WILL KNOW

AND I WILL DESTROY YOU.

LAIA is a Scholar living under the iron-fisted rule of the Martial Empire. When her brother is arrested for treason, Laia goes undercover as a slave at the empire’s greatest military academy in exchange for assistance from rebel Scholars who claim that they will help to save her brother from execution.

ELIAS is the academy’s finest soldier— and secretly, its most unwilling. Elias is considering deserting the military, but before he can, he’s ordered to participate in a ruthless contest to choose the next Martial emperor.

When Laia and Elias’s paths cross at the academy, they find that their destinies are more intertwined than either could have imagined and that their choices will change the future of the empire itself.

I have exciting news! Want to know the title for the final book in the Heirs of Watson Island trilogy? Head on over to Elizziebooks.com. Liz has my first ever video about Compulsion and the title, plus a great new giveaway. There are two additional places to win a necklace and T-Shirt, and you might even find a Persuasion teaser along the way. : ) 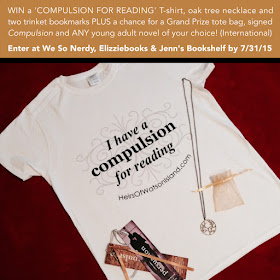 Elizziebooks
We So Nerdy
Jen's Bookshelves

There's also a grand prize, and you'll be automatically entered to win it when you enter any of the three T-shirt giveaways. But if you'd like even more chances to win, keep an eye out here, and on my Facebook page. I'll be posting a separate Rafflecopter in a little while! 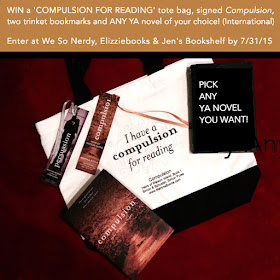 And finally, don't forget. There's a new Compulsion for Reading bag of books this month! 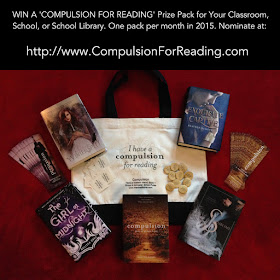 Have you wrestled with this kind of an approach to writing your story? Are you a plotter or a pantser, and is this too much or too little planning for you?

As a reader, do you like stories where the plot feels inevitable? Can you think of an example of a book that read like the characters never had any choice but to do what they did?