Living to Write by Beth Kephart

We are so thrilled to welcome National Book Award finalist Beth Kephart to the blog today. She's here to help us remember and appreciate where the inspiration and meaning of our stories comes from. Be sure to check out her newest release, One Thing Stolen, at the end.


Living to Write, A Craft of Writing Post by Beth Kephart


Sometimes life gets in the way of the stories we are telling. There’s no more pushing off the lab that’s due at school. Our little brothers have smashed our locks and are standing there, demanding. Our grandmothers aren’t well and they haven’t precisely asked, but could we forgive ourselves if we put our tremulous fiction way out ahead of a real live person’s struggling?

We look up. We power off. We put the research aside. The night settles down on the worlds in our heads. The bump and glare of the stuff some call “real” take essential precedence.

Maybe it seems, after awhile, that our untold, in-suspense stories have been diminished by the compromising passage of time, but after writing more than twenty books during an adulthood of jarring schedules and non-negotiable responsibility, I’ve decided this: The time we spend away from our stories is as potent as the time that we spend with them.

For example: It took me ten years and some eighty drafts to get a book I called Small Damages right. I’d have given up—I promise you—if I’d written those eighty drafts inside an uninterrupted swoon. Indeed, I needed to live more than I had lived to write that novel complete. I had to make friends I didn’t have when I’d begun the project. Travel where I’d not yet gone. Find postcards stuck inside old books found by accident in a barn. I could write Small Damages complete and whole only after and because I allowed the “real” to slip in. Because I paid attention to it.

And then there’s One Thing Stolen, a book I was sure I could never finally write. A book that was interrupted again and again by client demands, student projects, an ongoing conversation that was headed nowhere. I just need time to write, I’d hear myself complain, but when I did get time alone with the page, it was clear that I wasn’t ready yet. That not until I was bruised in a certain real-life way by a certain real-life thing could I find my way into the mindset of a major character. It wasn’t until I took a spontaneous walk that I heard and saw a bird that I needed to hear then see. It wasn’t until I was away from the page that I’d lived enough and seen enough to write the page that mattered.

Sure, we think a writer’s life is full of sweetly silence. Sure, we say we need a room, we need respect, we need the hours. Trust me, I want those things, too, but trust me, too: I do some of my best writing work when I’m not being a writer. I’m living and what difference will any book make if its author has not lived enough?

Just make sure you live that time well. 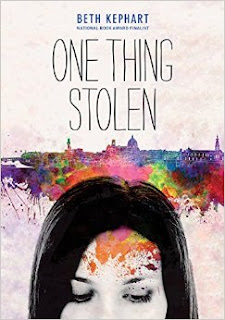 Something is not right with Nadia Cara. She’s become a thief. She has secrets she can’t tell. And when she tries to speak, the words seem far away. In Florence, Italy, with her epicurean brother, professor father, and mother who helps at-risk teens, Nadia finds herself trapped by her own obsessions and following the trail of an elusive Italian boy whom no one but herself has seen. While her father researches a flood that nearly destroyed Florence in 1966, Nadia wonders if she herself can be rescued—or will she disappear?

Set against the backdrop of a glimmering city, One Thing Stolen is an exploration of obsession, art, and a rare neurological disorder. It is about language and beauty, imagining and knowing, and the deep salvation of love.

Beth Kephart is the author of 20 books of nonfiction, fiction, and fable. Her latest, One Thing Stolen, received multiple starred reviews. Love: A Philadelphia Affair, a collection of essays, is due out in September from Temple University Press. Handling the Truth: On the Writing of Memoir won the 2013 Books for a Better Life Award (Motivational Category). Going Over, a novel of Berlin, was named a 2014 Booklist Top Ten Historical Fiction for Youth. Kephart is a National Book Award finalist and a winner of the Speakeasy Poetry Prize as well as grants from the National Endowment of the Arts, Pew Fellowship in the Arts, Leeway Foundation, and the Pennsylvania Council on the Arts. She teaches creative nonfiction at the University of Pennsylvania. More here: www.beth-kephart.blogspot.com.