Does anyone else think it's crazy that by the time this week is over, we'll be officially in the second half of the year? There are three new releases in the world of YA this week, and, because we love you so much, we're also giving away three books that have already released - just because we can! 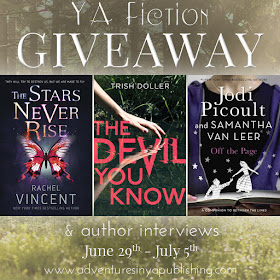 Off the Page
by Jodi Picoult and Samantha van Leer
Hardcover
U.S. Only
Delacourte Press
Released 5/19/2015
Read Jodi and Samantha's guest post on writing with a family member. 2. Keep his mouth shut about what they do together.

3. Never tease her about her friend (and unrequited crush) Ben.

Because with his integrity and values and golden boy looks, Ben can never find out about what she’s been doing behind closed doors with Tyler. Or that her mom’s too busy drinking and chasing losers to pay the bills. Or that Lexi’s dad hasn’t been a part of her life for the last thirteen years. But with Tyler suddenly breaking the rules, Ben asking her out, and her dad back in the picture, how long will she be able to go on faking perfect?

Author Question: What is your favorite thing about Faking Perfect?

While I was working on this book, my favorite thing was writing scenes between my main character, Lexi, and the school bad boy,Tyler. There aren't a lot of scenes with them together, but when one came up, I tried to make it count. Now that the book is about to be released, I think my favorite thing about it is the various relationships. There are three boys in Lexi's life--a best friend, a boy she's using, and a boy she's crushed on for years--and they each bring something different to her life. I also loved creating the tense, complicated relationship between Lexi and her estranged father. All in all, I wouldn't call FAKING PERFECT just a romance...there's so much more to it than that. It's also about family. A luminous YA love story that evokes Judy Blume's Forever for a new generation.

Sarah—Bean to her friends and family—is an aspiring astronomer and champion mathlete. She lives behind her beloved telescope, with her head in the stars and her feet planted firmly on the ground. For as long as she can remember, she's also lived in the shadow of her beautiful older sister, Scarlett.

But after a traumatic end to the school year, Sarah goes to Cape Cod for the summer with her family, determined to grow up. It's there that she meets gorgeous, older college boy Andrew. He sees her as the girl she wants to be. A girl like Scarlett. He thinks she's older, too—and she doesn't correct him.

For Sarah, it's a summer of firsts. Before she knows what's happened, one little lie has transformed into something real. And by the end of August, she might have to choose between falling in love, and finding herself.

Fans of Jenny Han and Stephanie Perkins are destined to fall for this romantic and heartfelt coming-of-age novel about how life and love are impossible to predict. Sierra Santiago was looking forward to a fun summer of making art, hanging out with her friends, and skating around Brooklyn. But then a weird zombie guy crashes the first party of the season. Sierra's near-comatose abuelo begins to say "No importa" over and over. And when the graffiti murals in Bed-Stuy start to weep.... Well, something stranger than the usual New York mayhem is going on.

Sierra soon discovers a supernatural order called the Shadowshapers, who connect with spirits via paintings, music, and stories. Her grandfather once shared the order's secrets with an anthropologist, Dr. Jonathan Wick, who turned the Caribbean magic to his own foul ends. Now Wick wants to become the ultimate Shadowshaper by killing all the others, one by one. With the help of her friends and the hot graffiti artist Robbie, Sierra must dodge Wick's supernatural creations, harness her own Shadowshaping abilities, and save her family's past, present, and future.

a Rafflecopter giveaway
Lindsey Hodder at 6:00 AM