Chandler Baker, author of ALIVE, on how it changed her outlook on writing

We're excited to have Chandler Baker join us to share more about her debut novel ALIVE.

Chandler, how long did you work on ALIVE? Looking back, ALIVE feels like it was written in fits and starts and a series of mad dashes. When I originally started working on ALIVE, I’d taken a long time away from writing my own fiction and had been working as a ghostwriter under pseudonyms for various book packagers. It had been years since the first and only book I had sent my agent to submit to publishers didn’t sell. I started working on the book at the end of September and I completed a 180-page proposal for ALIVE one week before my wedding in November of 2012. I thought my now-husband was going to kill me! I was breaking my neck trying to get something to show to my agent and we were trying to plan a wedding and move! I knew then, though, that I had something. Something worthy. I revised that proposal and the synopsis until mid-Spring, working on other projects intermittently. Then, once ALIVE sold a few weeks later, I was in for another mad dash when I had to finish writing the book in about a month….followed by a complete overhaul of the book’s ending when my first edit letter came sometime thereafter.

I often worry that I was on the verge of giving up if it weren’t for this book. I had been nursing strong doubts about my ability to be a writer for the few years leading up to ALIVE. I'd started to wonder whether writing was even something I truly loved or if I’d just seen publication as a brass ring that I somehow needed to acquire. My ideas weren’t feeling workable as novels and I kept going back to the well of writing other people’s ideas for book packagers since that at least gave me some sort of validation. But writing ALIVE felt different. I learned that I wasn’t only chasing the brass ring of publication anymore, but that I actually loved writing and that it was what I wanted to do with my life—tell stories. I relished the experience of taking these horrific and fantastical scenes that I saw in my head and making them feel organic to an overall contemporary-feeling story. By the end of writing ALIVE I knew that I’d created something I could be proud of and it’s completely changed my outlook on writing to this day.

Right now, I’m just finishing the first draft of Book 2 of the High School Horror series (Macmillan/Feiwel & Friends), the first of which (Teen Frankenstein) comes out in January. Book 2 is a companion to Book 1, so it includes a few of the same characters, but introduces a lot of new ones. It’s vastly darker and bloodier than Book 1, with an exponentially higher body count and portrays high school as way more horrifying. Basically, it’s been a blast to write.

After years on the transplant waiting list, she's running out of hope that she'll ever see her eighteenth birthday. Then, miraculously, Stella receives the transplant she needs to survive.

Determined to embrace everything she came so close to losing, Stella throws herself into her new life. But her recovery is marred by strange side effects: Nightmares. Hallucinations. A recurring pain that flares every day at the exact same moment. Then Stella meets Levi Zin, the new boy on everyone's radar at her Seattle prep school. Stella has never felt more drawn to anyone in her life, and soon she and Levi are inseparable.

Stella is convinced that Levi is her soul mate. Why else would she literally ache for him when they are apart?

After all, the heart never lies...does it? 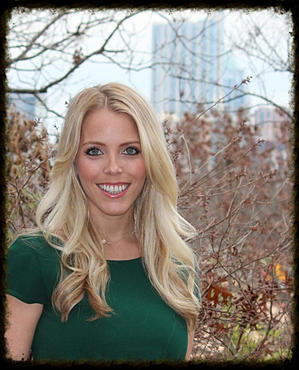 Chandler Baker got her start ghostwriting novels for teens and tweens, including installments in a book series that has sold more than 1 million copies. She grew up in Florida, went to college at the University of Pennsylvania and studied law at the University of Texas. She now lives in Austin with her husband. Although she loves spinning tales with a touch of horror, she is a much bigger scaredy-cat than her stories would lead you to believe.

You can find Chandler as the books contributor on the YouTube channel Weird Girls.

What did you think of our interview with Chandler Baker, author of ALIVE? Let us know in the comments!