Rachel Hawthorne, author of TROUBLE FROM THE START and THE BOYFRIEND PROJECT, on not taking the next sale for granted

We're excited to have Rachel Hawthorne join us, since she has not one but two books releasing this week: TROUBLE FROM THE START and THE BOYFRIEND PROJECT.

Rachel, what was your inspiration for writing TROUBLE FROM THE START?

I like stories where people aren’t always what they seem. We tend to judge people based on what we observe without knowing the stories behind their behavior or what they are struggling with. In this story, both characters make assumptions about the other and then have to reevaluate their opinions once they learn the truth.

The scene where Avery learns the truth about Fletcher was probably the most challenging part of the story because of all the various emotions involved. But I loved the way that it turned out.

I started writing seriously in 1990. I wrote 4 books that I never submitted anywhere. The first book I submitted, I sold in 1993. So it might appear that it happened quickly and maybe easily. But publication is a rocky road and I’ve had more rejections since I published than I did before I published. I’m constantly learning about the industry and never take the next sale for granted. One of two companion novels from beach-read favorite Rachel Hawthorne, this cute, romantic paperback original is about a good girl who falls for a bad guy.

Avery knows better than to fall for Fletcher, the local bad boy who can’t seem to outrun his reputation. Fletcher knows he shouldn’t bother with college-bound, daughter-of-a-cop Avery. But when their paths cross, neither can deny the spark. Are they willing to go against everything and let their hearts lead the way? Or are they just flirting with disaster?

Trouble from the Start releases simultaneously with companion novel The Boyfriend Project. These heartwarming paperback originals are the perfect summer reads, great for fans of Jennifer Echols, Lauren Barnholdt, and Susane Colasanti. 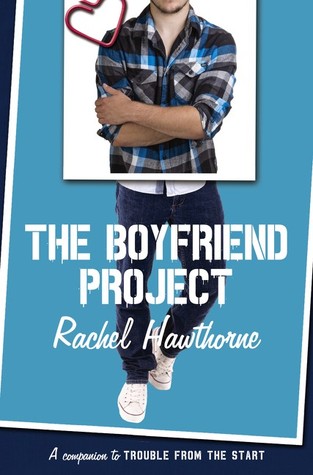 Perfect for fans of Stephanie Perkins, Lauren Barnholdt, and Susane Colasanti, The Boyfriend Project is a romantic read about a girl who wishes her sweet boyfriend had a little more edge.

Kendall and her boyfriend, Jeremy, have been together forever, and Kendall is starting to wonder if Jeremy is a little boring. . . . So she embarks on a boyfriend makeover. But as Jeremy learns to strut his stuff, other girls start to notice him and, what's worse, he's noticing them back. Then Jeremy breaks up with Kendall and she realizes her makeover project was the ultimate disaster. Is the sweet boyfriend she loved gone forever?

A companion novel to Rachel Hawthorne's paperback original Trouble from the Start, this title is perfect for fans of summer beach reads and sweet treats.

Rachel Hawthorne, who also writes as Lorraine Heath and Jade Parker, is the daughter of a British beauty (her mother won second place in a beauty contest sponsored by Max Factor® during which she received a kiss from Caesar Romero-who played the Joker on the old Batman TV series) and a Texan who was stationed at Bovingdon while serving in the air force. Lorraine was born in Watford, Herts, England, but soon after moved to Texas. Her "dual" nationality has given her a love for all things British and Texan. She enjoys weaving both heritages through her stories.

When she received her BA degree in psychology from the University of Texas, she had no idea she had gained a foundation that would help her to create believable characters—characters that are often described as “real people.” She writes for both adult and young adult readers. She received a Romantic Times Career Achievement Award for Americana historicals. Her novels have been recognized with a RITA, Romance Writers of America’s most prestigious award for excellence, a HOLT medallion award honoring outstanding literary fiction, a Romantic Times Reviewer’s Choice Award, five Texas Gold Awards, the Golden Quill Award, the Rising Star Award as well as other awards and recognitions. Her novels have been selections of the Doubleday and Rhapsody Book Club. Her novels have appeared on bestseller lists, including USA Today, Waldenbooks, and most recently, the New York Times.

What did you think of our interview with Rachel Hawthorne, author of TROUBLE FROM THE START and THE BOYFRIEND PROJECT? Let us know in the comments!