Hilary T. Smith, author of A SENSE OF THE INFINITE, on leaving readers feeling hopeful and less alone

We're happy to have Hilary T. Smith join us to share more about her latest novel A SENSE OF THE INFINITE.

Hilary, what was your inspiration for writing A SENSE OF THE INFINITE?

Every draft of this manuscript came out completely differently—different plot, different characters, different tense. It would have been impossible to convince anyone that they were even drafts of the same novel—you would have thought I was crazy! If I can point to a single inspiration, it would be my hometown of Niagara Falls, Ontario. I’d never written about the place where I grew up, and it was interesting to sift through all the sensory memories of train whistles, sumac, and waterfall mist, all those things I haven’t thought about much since I left.

I have so many favorite scenes in this book! One of them is the moment when Annabeth’s cousin Ava, to whom she’s barely spoken in years, meets her at the Greyhound station. When Annabeth was younger, Ava told her a terrible secret that left Annabeth deeply traumatized. Now, Ava becomes the older sister Annabeth never had—she really redeems herself, and that makes me so happy.

Another favorite scene is when Annabeth goes to the Curiosity Museum to look at the lithopedion on the day she finds out she’s pregnant. There’s a wistfulness about it—wishing for this magical solution, and simultaneously knowing that the museum is about to close, and she has to go back out into the snow.

As to the first question—every scene in this book was hard to write. Every single one! That’s why I basically fell down in exhaustion when the manuscript was finished.

Writing this book forced me to confront a lot of anger—anger about gender, anger about the destruction of the natural world, anger about our culture in general. It was scary for me to feel so much anger. And scary to write about it. Even though the YA shelves are filled with dystopias, there aren’t a lot of YA novels that address the rage and sorrow of the industrialized society we live in right now. It’s no accident that Annabeth’s highschool in A SENSE OF THE INFINITE is located at an intersection across from a Burger King, an EasyCuts hair salon, and a funeral parlor. These are the things we’ve decided are important; these are the things for which we bulldoze forests, fight oil wars, and destroy native cultures. Are they worth it? Hmmmmm.

So yes, I figured out I was angry. And the challenge was to hammer that anger until it shone.

What do you hope readers will take away from A SENSE OF THE INFINITE?

I have the same goal for all my books—to leave readers feeling hopeful and less alone. Often we have feelings or instincts we can hardly name, and the right book can help us clarify those instincts and gain confidence in them. I know there are readers out there who are having the same struggles and questions as the characters in A SENSE OF THE INFINITE, and this is my way of saying, “You’re OK.”

Rumi says it best: “Forget safety. Live where you fear to live. Destroy your reputation. Be notorious.” By the author of the critically acclaimed Wild Awake, a beautiful coming-of-age story about deep friendship, the weight of secrets, and the healing power of nature.

It's senior year of high school, and Annabeth is ready—ready for everything she and her best friend, Noe, have been planning and dreaming. But there are some things Annabeth isn't prepared for, like the constant presence of Noe's new boyfriend. Like how her relationship with her mom is wearing and fraying. And like the way the secret she's been keeping hidden deep inside her for years has started clawing at her insides, making it hard to eat or even breathe.

But most especially, she isn't prepared to lose Noe.

For years, Noe has anchored Annabeth and set their joint path. Now Noe is drifting in another direction, making new plans and dreams that don't involve Annabeth. Without Noe's constant companionship, Annabeth's world begins to crumble. But as a chain of events pulls Annabeth further and further away from Noe, she finds herself closer and closer to discovering who she's really meant to be—with her best friend or without.

Hilary T. Smith's second novel is a gorgeously written meditation on identity, loss, and the bonds of friendship. 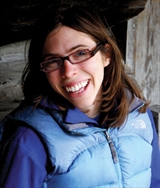 Hilary T. Smith lives in Portland, Oregon, where she studies North Indian classical music and works on native plant restoration. She is the author of Wild Awake.


What did you think of our interview with Hilary T. Smith, author of A SENSE OF INFINITE? Let us know in the comments!