Character is Not Plot by Brian Yansky

We welcome Brian Yansky to the blog today. Brian is the author of  several books for both young adults and adults, all populated by some sort of fantasy being, including aliens, ghosts and banshees. He's got an MFA from Vermont College and is here to share with us some fresh thoughts on respecting our plots.

Character is Not Plot: A Craft of Writing Post by Brian Yansky


Some of my writing teachers—and I’ve since heard this several times—said character is plot, but I’m here to stand up for plot and say it deserves a little respect and at least its own identity. True, plot and character are closely related, but in the pantheon of writing skills (character, setting, plot, language, POV, dialogue and more) each aspect of craft that eventually makes up a novel is closely related and often intertwined. This idea that character is plot makes the writer lose a distinction that can help him or her write stronger stories.

I do believe that giving a main character something to want can drive a story at the local level of a scene and throughout the whole novel. What a character desires, wants, needs, yearns for (as Robert Olen Butler calls it) can help a writer find that character’s story. The idea here is that we figure out what characters want and then make them do things that will help them get what they want. People or things will get in the way. This adds conflict. All of this is great and helpful.

But we need to be aware that plots are full of possibilities just like characters. We absolutely want these two to work together to build our novel, but we want to make these connections as interesting and as creative as possible. Do plot twists always naturally arise from what a character desires and who he or she is? No. Sometimes they’re created by the writer to test the character in some way or to add to the theme of a novel. A writer can only do this if he is aware that the plot is not controlled entirely by characters. It is ultimately controlled by the writer who is creating both characters and situations and the progression of both from his keyboard.

The plot does not thicken by itself or only with the help of character.

I believe character is the most important aspect of writing but the story, what happens to the characters in the time between the beginning and the end, is also very meaningful and deserves its own consideration.

Just as characters grow, plots needs to grow. We talk about character arc. Plots also need that arc. So if the plot is a relationship plot then the progression of the relationship between our main characters should be taken notice of so the writer can work on showing that progress, and the setbacks that will go with it, at different places in the novel. Recognizing this, in addition to understanding the characters’ desires, will help the writer not only give depth to characters but to story, too.

An example of a story where our main character’s wants aren’t enough to direct plot is To Kill A Mockingbird. Does what Scout, our main character, wants direct the story? Sometimes yes and sometimes no. Some of the larger aspects of the story happen beyond her and sometimes beyond her understanding, but these parts of the story, the trial of an African American man wrongly accused of raping a white woman for example, are essential to the novel’s complexity. Without them the novel would lose much of what makes it great.

So basically all of this is just to make the point that plot should be looked at as an opportunity. How? Here are a few ideas:

These are just a few ideas. I’m sure you can come up with better ones. Just be open to possibilities. 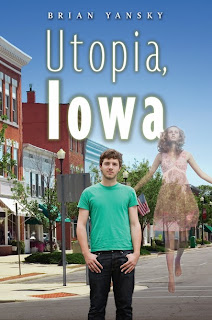 An Urban fantasy (small town urban) with paranormal elements (ghosts, witches, fortune-cookies that come true, an astral traveling movie-theater owner, a goddess, a banshee). Kind of funny. Utopia, Iowa is a place where the people are strange and there are stranger things than people. Our hero, Jack, is a high school boy who wants to be a screenwriter and has a serious crush on his best friend, Ash. He also happens to see ghosts. When two girls are murdered in Utopia, those ghosts insist he help them find their murderers. This gets him into all kinds of trouble with the police. But there's something darker and much more powerful than local law enforcement interested in Jack. Will Jack's dream of becoming a screenwriter come true or will he be caught up in a nightmare he can't get away from?

Brian Yansky has written five novels for young adults and hopes to write many more. He lives in Austin, Texas.