Six Tips for Improving Your Dialogue by Eileen Cook

We are thrilled to have multi-published author Eileen Cook on the blog today. She's here to share with us some wonderful insights for writing dialogue. And be sure to check out her new release, Remember, at the end of the post. Thank you, Eileen!

Six Tips for Improving Your Dialogue: A WOW-Wednesday Post by Eileen Cook


Many readers describe dialogue sections of a book as their favorite. This is likely due to a few reasons:


As writers, dialogue allows us to reveal important information in an interesting way and to move the plot of the book forward.

So how do you make your dialogue leap off the page? Here are six tips that will help you improve:

1. Avoid the Boring Bits: Real dialogue is filled with unimportant information. (How are you? Fine. Sure has been hot. Yep.) When you include dialogue in your manuscript make it dialogue that matters.


2. Dialogue Should Match the Character: Different characters should sound different from each other. What is your characters age, gender, level of education, ethnicity and how does that impact how they speak and the words they use?

“I dinna know lassie. Och, I be shamed terrible of wha happn’d.”


If the reader has to try and decipher what your character is saying it gets to be a challenge. Consider putting in just a couple words here and there, after that the reader will “hear” the accent without you needing to have it in every line


3. Dialogue Depends on the Situation: Think about the situation in which the dialogue happens. If there are guns being fired all around the characters, this is not likely the time for them to have a long conversation about their feelings. What they say will need to be short, more direct.

4. Dialogue Depends on Who They Are Talking To: The truth is that how we present ourselves is different depending on who we are interacting with. How a teen might talk to their parents is different then to a teacher, or to their friend, or to the person they have a crush on.

5. Characters Don’t Always Say What They Feel: One of the biggest errors in dialogue is having characters say exactly what they think or feel. In movie dialogue this is called “writing on the nose.” The truth is, most of us are either too polite or scared to say what we think. Sometimes we know we can’t say what we want because it will get us in trouble.

6. Using Location To Amplify Dialogue: We know that stories need conflict. Looking at where/when a dialogue scene happens can be an opportunity to increase conflict. What is the worst time/place to have a conversation? It would be a difficult conversation to break up with someone. It is even worse if that break up scene happens in some place that is public. For example, telling a best friend that you kissed their boyfriend is an awkward conversation. It’s worse if you tell her in front of a group of people at lunch. Or it might be worse if you tell her just after she admits that she’s in love with him.

7. Have Fun: The best part of writing dialogue? Unlike real life where once we say something (or are unable to think of the perfect comeback in the moment) in fiction we can always go back and revise. If you think of the perfect snappy sarcastic line for your character two weeks or two months after you finish a draft, you can go back and put it in.

Dialogue that engages the reader will pull them into your book. It allows them to get into the head of your characters and to feel that they are active participants in the story. If you find this is an area you struggle with things that can help include: 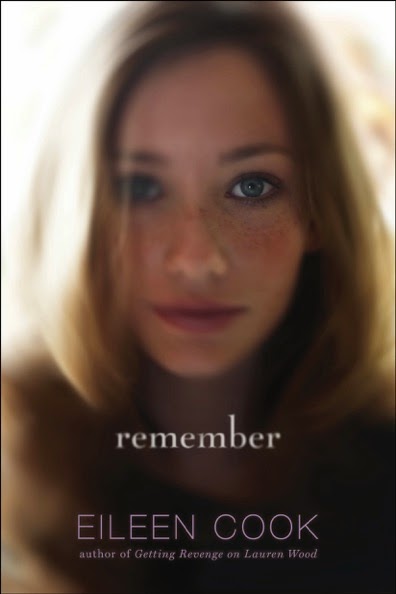 Eileen Cook is a multi-published author with her novels appearing in eight different languages. Her books have been optioned for film and TV. She spent most of her teen years wishing she were someone else or somewhere else, which is great training for a writer. Her latest release, REMEMBER came out in February 2015.

You can read more about Eileen, her books, and the things that strike her as funny at www.eileencook.com. Eileen lives in Vancouver with her husband and one very naughty dog and no longer wishes to be anyone or anywhere else.