Lamar Giles, author of ENDANGERED, on the importance of 'The End'

ENDANGERED is the latest thriller by Lamar Giles, and we're excited he's stopped by to share more about it.

Lamar, tell us about your inspiration for writing ENDANGERED.

I was inspired to write this book by a number of cyber-bullying stories that have hit the news in the last decade or so. The most high-profile of these stories tend to culminate in the bullied child’s death, which is horrendous. It occurred to me that the kids who did the bullying likely believed they either weren’t doing something bad when they were accosting their target, or they simply didn’t see the kid they were bullying as a real person. I wanted to explore how that sort of thinking works. How do you self-mythologize to make psychologically torturing another person seem shrug worthy to yourself and your friends? Then, when things go terribly wrong, how do you deal? Do you hang on to the mythology you created? You’re a good person, and it’s not your fault? It’s something worth examining, and I want people who read it to take a harder look in the mirror when they’re done.

There are two words that are the most important words for writers, but so many never learn to use them effectively. Those words are “The End”. Train yourself to finish stories. So much of the learning the craft comes in working the beginning, middle, and end of a story. But, it’s no secret that writing the middle of a story can sometimes feel like a drag, particularly with a long form project like a novel (which is why a lot of pros recommend honing craft by writing many, many short stories). If you’re the kind of writer that starts a bunch of projects, but finishes very few of them, break that habit. It’s the most useful skill you’ll develop.

Right now, I’m writing a book for Scholastic called OVERTURNED, about a teen card shark in Las Vegas who has to solve her poker player father’s murder. Then, I’ll be writing the follow-up to my first young adult mystery FAKE ID, which I’m super-excited about. The reaction to FAKE ID has been tremendous, and I’ve been longing to return to Nick and his world. Hopefully, all the FAKE ID fans out there feel the same. Endangered is a thrilling page-turner perfect for fans of Barry Lyga's I Hunt Killers.

The one secret she cares about keeping—her identity—is about to be exposed. Unless Lauren "Panda" Daniels—an anonymous photoblogger who specializes in busting classmates and teachers in compromising positions—plays along with her blackmailer's little game of Dare or . . . Dare.

But when the game turns deadly, Panda doesn't know what to do. And she may need to step out of the shadows to save herself . . . and everyone else on the Admirer's hit list. 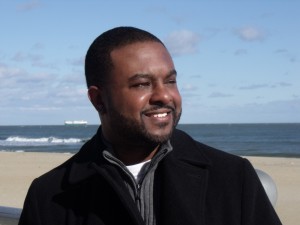 Lamar "L. R." Giles writes books for teens and adults. FAKE ID, his debut Young Adult Thriller, will be published by HarperCollins in 2014. He is represented by Jamie Weiss Chilton of the Andrea Brown Literary Agency and resides in Chesapeake, VA with his wife.


What did you think of our interview with Lamar Giles, author of ENDANGERED? Let us know in the comments!